Ita, Landini: "We do not sign that company regulation, the government must prevent this from happening"

The trade unions Filt Cgil, Fit Cisl, Uiltrasporti and Ugl have organized a garrison in front of the company's headquarters. Usb: "Another crucial day" 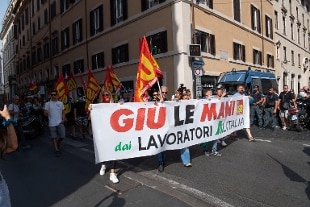 September 19, 2021 "We do not sign that company regulation, the government must prevent this from happening". Thus the general secretary of the CGIL, Maurizio Landini, guest of the Cortile di Francesco in Assisi, about Ita, who reconvened the social partners tomorrow, to conclude the examination of the working conditions of the staff of the new company. "We have given our willingness to face problems - the union leader reiterated - we are aware that things cannot remain as before, but the line that problems can not be solved by cutting rights and firing people cannot pass. in our opinion the road ".

The mobilization of Alitalia workers therefore continues. Tomorrow, in conjunction with the meeting called by Ita, the trade unions Filt Cgil, Fit Cisl, Uiltrasporti and Ugl organized a garrison in front of the company's headquarters. The appointment is for 3 pm. "Let us make our voices heard", say the unions in reiterating the "no to layoffs and unilateral working conditions" and "yes to a development plan and to the national collective bargaining agreement" .

The meeting between Ita and trade unions was called for 4 pm to conclude the examination of the working conditions of Ita staff. After the stop on 8 September, the parties had returned to the table on 14 September but, as the unions reported at the end of the meeting, it was still an interlocutory round. Also tomorrow the confrontation with the Ministry of Labor for the extension of the cigs of Alitalia employees starts again. In the morning a new meeting was called in the dicastery which falls two days after the expiry of the current redundancy scheme, set for next 22 September.

Tomorrow's appointment "represents another crucial day for the fate of 10,400 workers of the Alitalia Group: it is in fact the eve and the deadline indicated by the management of Ita to initiate calls based on the selection imposed by the company, both of the term of the Cigs cycle in force ". To underline this is the Usb in a note.

"In the last few hours, some important voices of majority and minority parties have finally broken the isolation in which former Alitalia employees and trade unions were left, denouncing the most evident distortions and forcing of what remains a 100% public investment. It is important for the parliamentary committees to acknowledge that what Ita presented to the union representatives is not the plan approved by Parliament a few months ago, consequently convening the top management of Ita on Tuesday 21 September ", states the Usb.

"It is truly surprising - says the union acronym - that no call has yet been received from President Altavilla, neither for today nor for the next few days. hours from the expiry of the Cigs in Alitalia, Minister Orlando has not yet responded to the pressing request to extend the cycle of social safety nets. The convocation just received for 20 September at 11.00 in videoconference belongs to the extension of the existing Cigs procedure, which is by no means exhaustive with respect to the dramatic scenario generated by the government caporetto in Brussels. The same government that is still hiding in this whole affair ".