Finnish Ritva Risu worked as Sarah Ferguson's babysitter. At the time, she did not yet know that young Sarah would one day become the Duchess of York. 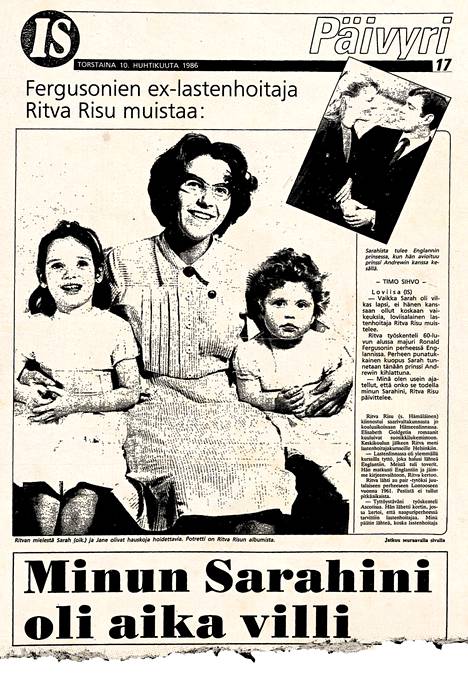 When Ritva Risu enrolled in the English family of Ferguson in 1961 as a babysitter, she did not guess that the family pit would later become royal, Duchess Sarah of York.

- Sarah was a lively and humorous child, Risu, 82, recalls.

The walls of the old salt barns glow red at the Loviisa summer oasis in Laivasilla.

The delicious smell of smoked salmon hovers over the beach restaurant.

After more than 35 years, IS has returned to interview Ritva Risu from Loviisa, who is amazed at the rapid passage of time.

The story, published in IS in April 1986, attracted widespread attention, and a version of the story even ended up on the front page of the Daily Mail, England’s second-read newspaper.

IS first interviewed Ritva 35 years ago.

Earlier that year, Risu had experienced the biggest surprise of her life after reading about IS from Prince Andrew and Sarah Ferguson of England and getting engaged a little later.

- I never would have believed that.

Somehow the girl still thinks of herself as Sarahina, Risu described at the time.

Ritva Risu (nee Hämäläinen) was already interested in England as an early child.

Her favorite readings were Elisabeth Goudge’s novels like The Heart of the Family.

After high school, Ritva studied to be a babysitter at Lastenlinna in Helsinki.

- I decided that before I go abroad, I would get a profession for myself.

Ritva became friends with Aira Lanteeala, who was in the upper course.

Aira then traveled to work in England and the young women remained in correspondence.

- My butler mother, Aulango, had a colleague whose daughter worked for a Jewish family in London.

He was leaving the family and I got that place.

Although Sarah became a duchess, for Ritva this was always “her Sarah”.

Ritva was not suspected of leaving for England, even though her language skills were frivolous high school English.

I was so stupid that I couldn't be afraid, Loviisa smiles.

The family to which Ritva went as an au pair lived in Hendon.

The couple had two younger daughters and a teenage son.

- The lady was very kind, I just didn't know the Lord.

I took care of the laundry, kept the rooms clean and got the girls out of school.

His career in Hendon was short, as Ritva received a card from Aira Lanteala from Ascot.

- Aira announced that a babysitter is needed in the neighboring family.

Ritva decided to express her interest.

He then traveled with the cabbage about 50 miles to Ascot, where the Ferguson family lived in an area called Sunninghill.

- I remember when I came to the gate of the house.

It didn't excite me at all.

She and her husband, who worked in the Royal Guard, Major Ronald Ferguson, had two daughters: Jane, who soon turned four years old and Sarah, a couple of years younger.

Ritva received a warm welcome from the family.

He got a room with his own TV as a luxury.

- My bedroom was next to the Children's Room.

The children had a private bathroom with a small bath.

The staff of the Ferguson House, Lowood, also included a chef and a gardener.

The family also had a horse caretaker.

I was with breakfast and tea.

I didn't make any food.

Outdoors for girls was also the responsibility of the babysitter.

After a day’s sleep, Ritva often went for a walk with Jane and Sarah.

Nearby lived an Indian Maharadi with horses.

- Horses were allowed to watch, but not fed.

There was a pony in the house's own yard.

Then there were two dogs: Puff and Kerry, Ritva remembers.

Today, Sarah Ferguson is a duchess known to all.

He mainly deals with Susan Ferguson.

Majuria was rarely seen, as he lived mainly in barracks.

Due to his polo hobby, Ronald Ferguson was also involved with the royal family.

He later even worked as a pool manager for the Prince of Wales.

Ritvak also went to follow the polo in Windsor and he saw Prince Philip and Princess Anne on the field.

- I went carefully towards Prince Philip.

I didn’t dare go very close, but still got the picture.

The Royal Ascot is an annual milestone in the community.

During the rides, Ritva took Jane and Sarah to their grandfather, Colonel Andrew Ferguson.

The colonel's magnificent rose garden remained in the Finnish mind.

Susan Ferguson had a huge Ascot hat adorned with many flowers.

Ritva jokingly asked if the flowers should be watered to maintain the look of the hat.

When the Ferguson couple traveled to the United States and France, the girls were left in the care of a babysitter.

Susan Ferguson remembered Ritva from her travels with many cards.

A babysitter was also involved when visiting London for a royal guard parade or taking a holiday on the Channel coast.

- The babysitter is highly valued in the family, almost a family member, Ritva Risu characterizes.

He generously received thanks from Mrs. Ferguson.

The rebuke only came when the babysitter had forgotten Jane’s riding gloves home.

The term tomboy refers to a girl who was excited about the boys ’games.

Sarah had enough humor when she was little.

For once, he left the Thanksgiving prayer at the end of the meal halfway and thanked only for the strawberries offered.

Ritva was employed by the Fergusons for about a year.

Ritva returned to work in England, but no longer in Ascot.

- I just went to greet them.

I already had another job.

Ritva went to the family near Northampton.

A Finnish nurse was married there with the count.

The couple had a little daughter who was cared for by Ritva.

He later worked at two hospitals in the London area.

In another, Ritva saw how, the surgeon opened the patient's chest and gave a heart massage.

- I made sure the hair didn't fall there.

It stuck in my mind.

Ritva was in England for a total of three years and four months.

He was not only dedicated to work, but, like other young people, went to Ascot, for example, to dance.

- Twist was danced there.

I also had delights, but I was a kind girl.

Ritva recalls the time she spent with her family with warmth.

Ritva also managed to work as a babysitter for an American family in Tehran.

- From there I still had to go to India.

I knew that it was Midsummer and I felt so homesick that I returned to Finland.

Ritva married Matti Risu, whom she met in Helsinki during KY's dances, in 1965. Soon the young couple headed for the man's engineering work to the state of Georgia.

The family’s firstborn, Liisa, was born three weeks after arriving in Albany.

- I was there for a while working at the hospital.

Five years later the family gave birth to a son.

Risu's daughter, dancer and choreographer Liisa Korpiniitty, 55, is currently the director of the Dance Theater Hurjaruuthi.

After returning to Finland, the family's journey passed through Hyvinkää to Loviisa in 1973. Matti Risu worked at the nuclear power plant and Ritva as a babysitter for the city, where she retired at the age of 58.

Risui's home is right in the center of Loviisa.

Prince Andrew and Sarah Ferguson were consecrated in July 1986. Sarah was awarded the title of Duchess of York.

Ritva Risu sent a congratulatory letter to Sarah with pictures of her childhood.

The Royal Letter of Thanks is one of his greatest treasures.

The royal couple had two children: Princesses Beatrice and Eugenie.

The couple divorced in 1996, but they are still very close.

Ritva Risu has not followed the latest stages of her former foster child very closely.

However, he is glad that Sarah and Andrew are at least friends again.

Admittedly, Ritva is confused about the prince's sexual uproar.

Yes, I know from Sarahini's picture, Ritva commented on the fresh portrait of the Duchess of York.