European Volleyball, the Azzurri beat Germany 3-0 and win the semifinal

It will be played on Saturday against Serbia, the reigning champion. Live on Rai 2 at 9pm 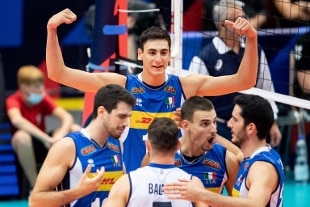 The exultation of the Azzurri (Ansa)

15 September 2021 Italy is in the semifinals of the men's volleyball European Championships. Ferdinando De Giorgi's national team beat Germany 3-0 (25-13, 25-18, 25-19) coached by Andrea Giani in the quarterfinal match that was played in Ostrava, in the Czech Republic.

The Azzurri in Katowice ( Poland) on Saturday 18 September they will face Serbia, the reigning champion (live on Rai 2 at 9 pm). The other semifinal will see Poland as world champion and Slovenia, finalist for the last Europeans.

Italy thus returns to the top 4 of the Old Continent six years after the last time (bronze in 2015 with finals in Sofia, after the first phase co-organized by Italy and Bulgaria), while it was eliminated in the quarterfinals in 2017 (Belgium) and 2019 (France).

De Giorgi and his boys, thanks to seven consecutive victories at Ostravar Aréna, have thus achieved a truly sensational goal for a team that presented itself at the starting line with eight rookies in the event, after the disappointment at the Olympics.

De Giorgi: Serbia is happy for the journey made

"We are clearly happy also for the path we have made by playing a really good match. A coach at the end of a match like this can only be satisfied, we are happy not only for us but also for the same blue jersey that returns to the top four. in Europe".

Thus the Italvolley coach, Ferdinando De Giorgi, comments on the Azzurri's access to the semi-finals of the European Championships. "The boys know that in our heads now nothing must change, but we must go there trying to play our best volleyball and see if it will be enough to reach important goals - explains the former blue setter - Today was not easy, but we were good at limiting their strengths and at containing them by keeping our pace always very high. It is important the growth of some guys in terms of personality during the competition and during the whole tournament. They are solving some difficult situations as a team. awaits Serbia - concludes De Giorgi - and it will certainly not be easy but we will have to go there and express ourselves as best we can.Then we'll see what happens. "