Putin voted online - the wristwatch erupted: Why does voting day seem to have been a week ago?

On Friday, September 17, the Kremlin released a video in which Vladimir Putin is exercising his voting rights over the Internet. Shortly afterwards, press secretary Dmitry Peskov was able to explain why, on the basis of the president's wristwatch, the vote seems to have taken place a week earlier. 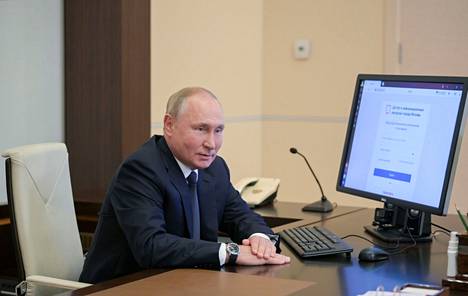 For the first time, Russian President Vladimir Putin took the opportunity to vote online in the Duma elections.

Putin, who is in voluntary coronary quarantine, was photographed at the computer as he tapped the keyboard for a moment, after which Russian text appeared on the screen:

- Thank you, your voice has been taken into account.

Putin then gave a short speech in which he urged the Russians to vote.

- As you noticed, I fulfilled my civic duty in electronic form, in on-line format, because I comply with quarantine and health safety restrictions, Putin explained to the cameras.

Putin's video of the vote appeared on the Kremlin's website on Friday, September 17, at 4:30 PM Moscow time.

However, it didn’t take long for close-eyed viewers to pay attention to Putin’s wristwatch.

The clock seems to have been around 3:24 p.m. at the time of the vote, meaning the video would have been posted just over an hour later for everyone to see online.

The problem, however, is the date: instead of reading the date at 17 on the dial, it has the number 10.

In other words, there was a suspicion that Putin had filmed the voting video as early as a week ago on Friday, even though the Russian Duma election vote did not begin until September 17th.

Vladimir Putin was photographed at the computer when he first took the opportunity to vote in the election via the internet.

Putin traditionally holds his watch in his right hand.

The news site Podjom got to ask Putin's press secretary Dmitry Peskov why Putin's watch has the wrong date.

The date does not match simply because the president does not set a date on his watch.

He doesn't pay attention to it.

Peskov's explanation was that Putin simply does not take advantage of the full date feature in his watch.

- The date does not match simply because the president does not set a date on his watch.

He doesn't pay attention to it.

He doesn’t use a date on his watch, so yes, he has a different date, Peskov announced.

(The video below includes part of Peskov's explanation of the clock.)

Peskov’s explanation of the clock doesn’t necessarily go full to the Russians, as Putin is known as a passionate wristwatch enthusiast.

Read more: Putin's watch stole attention right out of the box - this is the lavish "Putin-Blancpain"

Read more: More expensive stayed home - Did you notice what kind of clock flashed on Putin's wrist in Savonlinna?

In other words, if Putin collects rare precious watches and uses them in general, wouldn’t it be natural for him to take advantage of the many features of watches as well as the date feature?

On top of all that, the Kremlin says Putin doesn’t use a smartphone at all for security reasons, so it could therefore be assumed that the date on the clock could be beneficial to Putin.

The Kremlin eventually also had to explain how Putin managed to vote online, even though he doesn’t have his own smartphone.

Namely, the online application of the Russian Duma elections requires authentication using a mobile phone, the telephone number of the Russian operator and a verified account on the state Gosuslugi service pages.

- The president himself really doesn't have a device, but his aides have. The telephone of an assistant was used during the vote. It was all perfectly normal, Peskov explained to the news agency Govorit Moskva radio station.