MotoGP / San Marino: Bagnaia, on pole, stands up to Quartararo Misano Adriatico (Italy) (AFP) He does not give up: Francesco Bagnaia (Ducati), second in the championship 53 points behind Fabio Quartararo (Yamaha), will start again from pole position, at the Grand Prix of San Marino, and intends to slow down the French on his road to the world title in MotoGP. Can Bagnaia make Quartararo doubt? By securing his second consecutive pole, as at the GP of Aragon 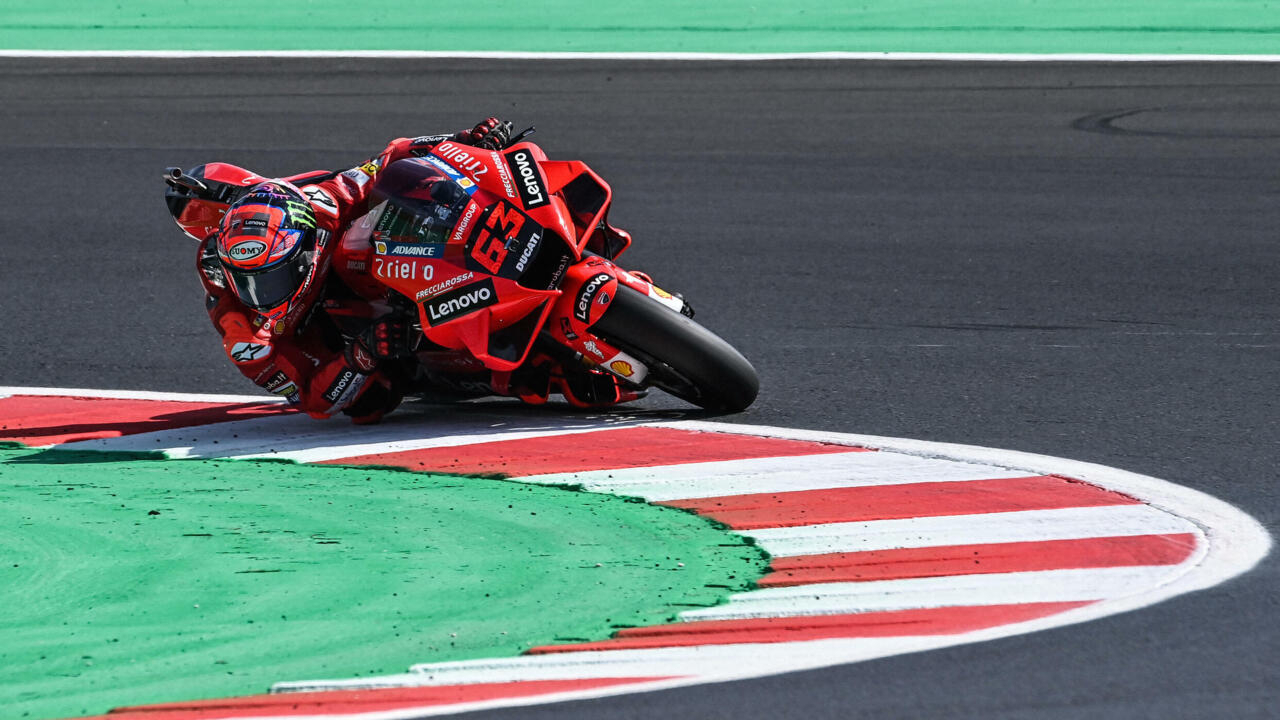 He does not give up: Francesco Bagnaia (Ducati), second in the championship 53 points behind Fabio Quartararo (Yamaha), will start again from pole position, at the Grand Prix of San Marino, and intends to slow down the French on his road to the world title in MotoGP.

By securing his second consecutive pole, as at the GP of Aragon (Spain) last week, the Italian Bagnaia is the ultimate resistance against the French Quartararo, who will start 3rd Sunday at 2:00 p.m.

Between the two, Jack Miller (Ducati) will be in 2nd position to complete the first row on the Misano circuit.

Winner of his first GP in Aragon, Bagnaia is on a cloud.

A performance that pushed Quartararo to the ropes, until the fall in the last seconds of qualifying.

"I tried everything, I braked very late at turn 1, beyond the limit ... it was pole or nothing, and there was nothing!", Smiled Quartararo.

"But the first row was the main goal, our pace is very good so we can't wait to see you tomorrow to fight for the victory".

For this, Quartararo will have to fight alone against the Ducati armada, at home in Italy.

In addition to the factory Ducatis of Bagnaia and Miller, those of the Ducati-Pramac satellite team of Jorge Martin and Johann Zarco will stick him, starting 4th and 5th.

Pol Espargaro's Honda will complete the second row of this 14th Grand Prix out of 18.

Frenchman Fabio Quartararo during qualifying for the Grand Prix of San Marino, in Misano, Italy on September 18, 2021 ANDREAS SOLARO AFP

Bagnaia, winner at 24 for the first time last week, signs the third pole position of his career, the third this season.

"It's a circuit where I feel very good," he explains.

"Since Aragon, I feel really great at all levels, the bike is working perfectly. This weekend it's a little more complicated with the weather changes, but we worked well. Fabio has a good pace too, but I think we are very efficient ".

With only five races remaining, Quartararo, 22, remains the favorite with his comfortable lead.

And if Bagnaia, freed from the weight of victory, will want to relive his drunkenness again, Quartararo will aim for a 6th victory this season.

The Niçois, who has the opportunity to become the first French world champion in the premier category, has so far been able to nip any lasting competition in the bud.

Because if they are eight to have won at least one GP this season, he is the only one to have won more than two.

The 2020 season had also been very uncertain, with a world champion, Joan Mir (Suzuki), winner of a single Grand Prix.

Third current behind Bagnaia, Mir will only start on Sunday 11th.

Meanwhile, former class master Marc Marquez (Honda) is still trying to regain his best level after missing all last season due to injury.

The Spaniard, six-time world champion in the premier category, will start 7th.

The other multiple world champion Valentino Rossi (Yamaha-SRT) has long been no match for the younger generation.

In front of his fans, limited to 23,000 per day due to the health crisis, the current 21st in the standings, who fell twice without gravity, will only be 23rd on the grid.

The MotoGP legend lives his last five races before retirement at 42.