"The next appointment is in Indonesia in a year: if we do nothing in between, the planet will not wait for us" said the Minister of Agricultural and Food Policies at the final conference. 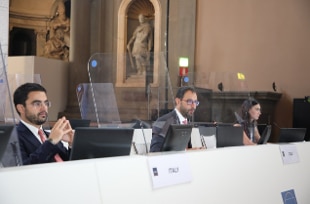 September 18, 2021 "We have approved a final statement, the Charter of the sustainability of the food systems of Florence. Now the ball is in our field. The next appointment is in Indonesia in a year: if we do nothing in between, the planet will not awaits us ". This was stated by the Minister of Agricultural and Food Policies Stefano Patuanelli at the closing conference of the G20 on Agriculture in Florence. "We must be able to implement policies that definitively reverse the course without looking at consensus and immediate repercussions - he added - everything we do will have an effect in many years".

There are passages in the document, the minister continues, "important with respect to the objectives of the 20-30 agenda", including "one of the most important objectives, objective two with respect to the zero hunger goal, because it is clear that each country lives a piece of the problems. Although we are aware that still too often in our country children have their only full meal at school, and therefore the issue of food safety also concerns Italy, it is evident that there are areas of the world where this is the main problem, "said Patuanelli.

"So the goal on this point is to increase the multilateralism of relations and cooperation between countries to avoid waste and allow the production of healthy food even in countries where this does not happen despite having the possibility to do so", explained the minister. The Florence Charter "is definitely a document that despite the obligation to reach compromises, because when there are many countries that sign a document, all with different production systems and different problems, the compromise cannot be missing to have the satisfaction ; it is however a document which, compared to other texts, has some concretities ".

"Stop on plastic tax and sugar tax due to consensus risks"

Finally, on the 2030 agenda, Patuanelli says "I see hesitation because very often making choices means dividing the field and therefore it can increase or cause the loss of consensus. There are two actions that our country has found itself facing but that we have not yet managed to carry on: the sugar tax and the plastic tax ".

"The issue of illegal hiring and the exploitation of workers in the agricultural sector has not been addressed - he specifies again - But it is at the center of my political agenda, we have finally completed the mapping of labor needs because we know the request for workers in each period of the year is essential ".

"On the sidelines of the G20, in some events with trade associations" we talked about the issue of wheat prices, "the dynamic that is taking place, particularly in some production sectors, is under the eyes of all - the minsitro said. - That spiral must also be seen with an eye to the speculations that are developing on the stock market, which are international. If there is no plateau reaching, and then returning to lower levels, some intervention on a global level will have to be taken ".