A unique memorial for joining the army: Recruits from Lishui, Zhejiang receive the "Sword of Congrong"

China News Service, Lishui, September 18 (Shao Yanfei, Fan Yubin, Ge Mingrui) "Bright sword!" "'Sword of Congrong", out of the sheath!" ... On the evening of the 17th, Longquan City, Lishui, Zhejiang hosted the 2021 Fall Recruit Farewell and "Sword of Congrong" "The main venue of the sword donation ceremony. At the event site with the theme of "Strengthening the Rong with the Sword and Strengthe 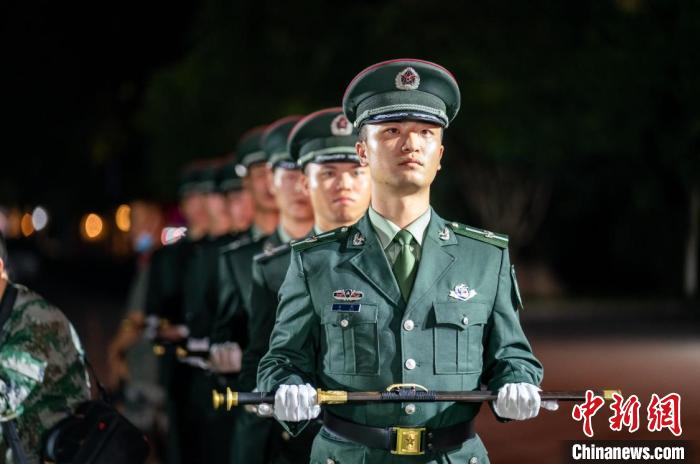 At the event site with the theme of "Strengthening the Rong with the Sword and Strengthening the Country", representatives of the recruits in Lishui City in the fall of 2021 received the "Sword of Congrong" engraved with an exclusive number.

"Gifting swords to you is both a heritage and a sustenance." Wu Xiaodong, deputy secretary of the Lishui Municipal Party Committee and Mayor of the Communist Party of China, said that he hoped that the recruits would be loyal to their mission, make new contributions, repay their hometowns, and promote the "loyal mission, seeking truth, advancing, and rooting in the people" of Zhejiang. The spirit of the Southwestern Revolution, fulfilling the goal of "obeying the party's command, being able to win battles, and having a good style of work", and using practical actions to add luster to Lishui.

Photo by Cheng Ziqi at the sword donation ceremony

Longquan is one of the old revolutionary areas in southwestern Zhejiang. Its sword-making history can be traced back to the Spring and Autumn Period and the Warring States Period.

Combining the well-known Longquan sword with the tradition of donating swords to soldiers in ancient China, in the first half of this year, Longquan City's spring 2021 recruits farewell and the "Sword of Congrong" sword donation ceremony came into being.

After the ceremony was successfully "out of the circle", the cumulative number of online hits on related topics exceeded 210 million times, and it played a role in boosting the autumn conscription in Lishui City.

In order to consolidate the results of Lishui’s conscription work and encourage more outstanding young people to join the army, on the occasion of the 21st National Defense Education Day, the Lishui Municipal Party Committee, the Municipal Government and the Lishui Army Division first advocated the promotion of the farewell of recruits and the "Sword of Congrong" in Lishui. Sword ceremony.

All counties (cities, districts) of the city enlisted recruits in different places in the autumn and received the "Sword of Congrong".

"One side has the military sword and the life of the military. We use the Longquan sword as the medium to connect the military, the military and the military to the close relationship. Through the whole process of care, service and management, the value of respecting the military and caring for national defense is formed in the whole society. Orientation." Legend of Ge Ji, Minister of Human Resources and Military Affairs of Longquan City.

Photo by Cheng Ziqi from the sword of Rong

It is understood that the "Sword of Congrong" given to the recruits adopts the Han sword standard, and each sword is engraved with a unique number corresponding to the recruit's enlistment approval letter.

"Cong Rong's Sword" is simple and tough, representing the spirit of loyalty, perseverance and bravery of Chinese soldiers. The length of the sword is 81 cm, meaning that the Chinese People's Liberation Army was born in the "August 1st" Nanchang Uprising.

After the sword donation ceremony, the "Cong Rong Sword" of each recruit will be sent to the recruit's home by the staff of the Lishui county (city, district) recruitment office and service station for veterans, and in accordance with the "Cong Rong Sword" "Guide Sword Guide" for maintenance and management.

"The sword donation ceremony made me feel the care of my hometown. The moment I took over the sword, my mission was glorious." Ji Jiayi, a 21-year-old recruit from Longquan, dreamed of becoming a soldier since he was a child. After graduating from university this year , He chose to sign up to join the army and became a member of the People’s Navy.

"My parents and I have unanimously decided to place the'Congrong Sword' in the most conspicuous position in the living room of our home. This will be the testimony of my lifetime honor and military career." Ji Jiayi said.

In addition to sending off recruits and encouraging them to fear difficulties in their military career and win glory for their hometown, as an important carrier of ideological and political education for young people, the "Sword of Congrong" sword donation ceremony also invited 90 student representatives to participate, and launched a new song "Zhang "Sword from the Army" to further stimulate the enthusiasm of the broad masses of school-age young people to join the army and serve the country and the public's patriotic feelings of supporting the army.