With the Aden demonstrations entering their sixth day, political forces in solidarity with the protesters and international concern over the collapse of the Yemeni economy

Two Yemeni components announced their support for the popular protests condemning the deteriorating living conditions in Aden and Hadramawt. For their part, the ambassadors of Britain, America, Saudi Arabia and the UAE expressed concern about the collapse of the economic and humanitarian situation in Yemen. 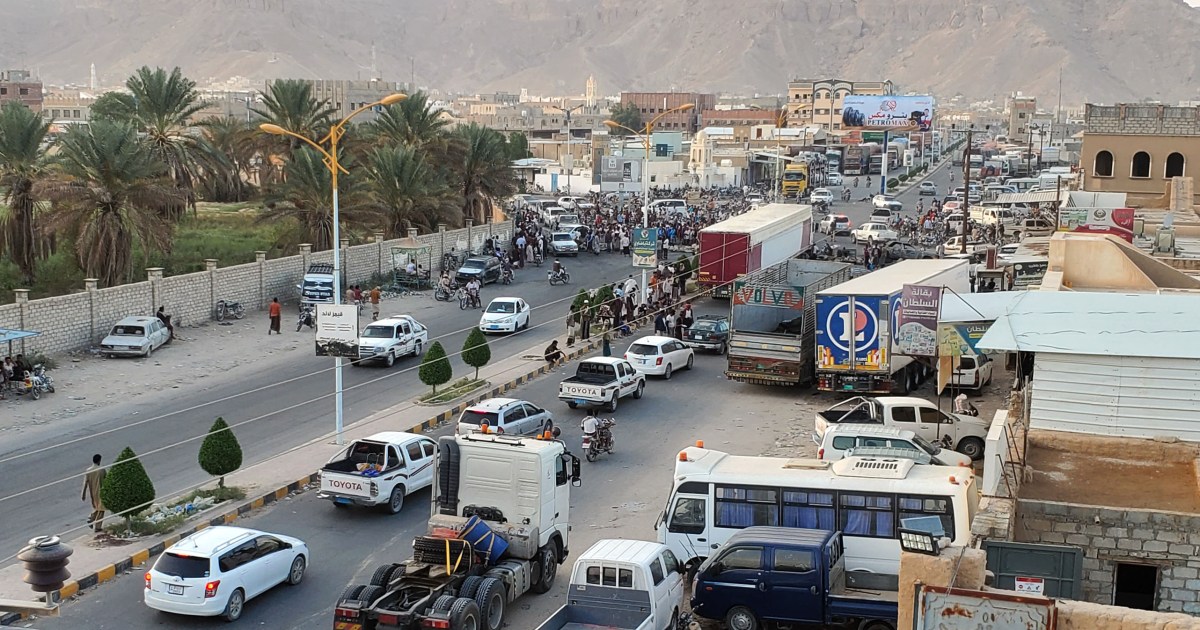 Two Yemeni components announced their support for the popular protests in the governorates of Aden and Hadramout (south), condemning the deteriorating living conditions and the collapse of the local currency. For their part, the ambassadors of Britain, America, Saudi Arabia and the UAE to Yemen expressed their concern over the collapse of the economic and humanitarian situation.

A few days ago, the governorates of Aden and Hadramout have witnessed angry protests denouncing the deterioration of services and the significant rise in food prices due to the unprecedented deterioration in the history of the riyal, as the price of one US dollar exceeded one thousand of this local currency.

With the decline of the riyal, the suffering of the population worsened, and the value of the salaries of many groups reached less than $100.

In a statement, the Southern National Coalition expressed its full solidarity and absolute support for the peaceful demonstrators in the governorates of Aden and Hadhramaut in their legitimate demands.

He considered the situation in Aden and other cities, including security chaos, the collapse of the currency, the high cost of living and the deterioration of basic services, as an inevitable result of the failure to implement the military and security aspect of the Riyadh Agreement.

The statement held the party obstructing the implementation of the military and security part (meaning the Transitional Council) of the Riyadh Agreement, responsible for the bad situation, calling for enabling the government and state institutions to carry out their duty to normalize the situation, provide services and pay attention to the economy.

In a related context, Fouad Rashid, head of the Supreme Council of the Southern Revolutionary Movement, called on Thursday the leaders and rules of the council to interact with societal issues related to the lives of citizens.

Rashid confirmed - in a statement published by the council's official account on Facebook - support for the uprising of the free youth against the deteriorating economic conditions and poor services.

In a related context, local sources reported that clashes erupted between security forces affiliated with the UAE-backed Transitional Council, and gunmen in Khor Maksar, Aden, in the south of the country.

The sources confirmed that the demonstrations were renewed in the cities of "Crater" and "Al-Tawahi", where the participants chanted slogans calling for the necessity of reforming economic conditions, controlling prices, and stopping the deterioration of the local currency.

The people of the city of Aden buried the body of the first person killed in the popular protests after he was shot by forces affiliated with the Southern Transitional Council, and 5 others were wounded on Thursday evening.

Mourners buried the body of the young Ziad Zaher (18 years), amid chants condemning the Transitional Council.

They also demanded that decisive measures be taken to stop the deterioration of living and service conditions in the country, and to stop acts of repression against protesting citizens.

Local sources said that dozens of trucks transporting goods had piled up in the city of "Tarim" in the Hadhramaut governorate in the east of the country, after protesters closed the international road linking the border crossing with the Sultanate of Oman.

These sources added that the protesters closed the main road in protest against the deteriorating living and economic conditions in the country.

For his part, the Governor of Hadhramaut, Major General Faraj Al-Bahsani, announced a partial curfew in the governorate from 8 pm until 6 am.

Meanwhile, the ambassadors of Britain, America, Saudi Arabia and the UAE to Yemen expressed their concern about the depreciation of the Yemeni riyal and the rise in food prices, and its impact on the economy and the humanitarian situation.

During their meeting in Riyadh, the four ambassadors called on the Yemeni government to take the necessary steps to achieve economic stability.

They stressed the provision of support to the Yemeni government, in addition to the importance of implementing the Riyadh Agreement, the government's return to Aden and its commitment to a political solution.

In turn, Stephane Dujarric, spokesman for the Secretary-General of the United Nations, said, "The humanitarian situation in Yemen is deteriorating, and the fighting in Marib is driving more civilians to flee."

Dujarric added that the Yemeni economy is on the verge of collapse, and the riyal has depreciated by more than 80% since the beginning of the crisis.

And he added, "As for the deteriorating humanitarian situation in Yemen, our humanitarian colleagues warn of the increasing casualties among civilians due to the fierce fighting in Marib, which led to the displacement of more than 1,800 people last week only, raising the total number of new displaced people in the governorate to more than 27,000. since the beginning of the year."

For nearly 7 years, Yemen has been witnessing a war that has killed 233,000 people, and 80% of the population - numbering about 30 million people - has become dependent on aid to survive, in the worst humanitarian crisis in the world, according to the United Nations.

On November 5, 2019, the Riyadh Agreement was signed between the legitimate government and the Transitional Council, under Saudi sponsorship and UN support, with the aim of resolving differences between the two parties.

Among the most prominent provisions of the agreement is the formation of a 50-50 government between the north and the south, in which the Transitional Council (formed on December 18) will participate, in addition to resolving the military situation in Aden and other areas that witnessed confrontations between the two parties, such as Abyan Governorate (south).

Despite the formation of a 50-50 government on December 18, no significant progress has been made in implementing the military part of the Riyadh Agreement, especially the integration of the army and security forces affiliated with the government and the Transitional Council, under the leadership of the Ministries of Interior and Defense.

The Transitional Council is still in security and military control of the temporary capital, Aden, since August 2019, and the delay in implementing the military part of the Riyadh Agreement has restricted the government’s movement in its temporary headquarters in Aden, according to observers.