His Highness Sheikh Mohamed bin Zayed Al Nahyan, Crown Prince of Abu Dhabi and Deputy Supreme Commander of the Armed Forces, yesterday visited the Zayed Center for Research in Rare Diseases in Children, on the sidelines of his visit to the United Kingdom. Upon his arrival at the center, His Highness was received by the Minister of Health and Affairs. 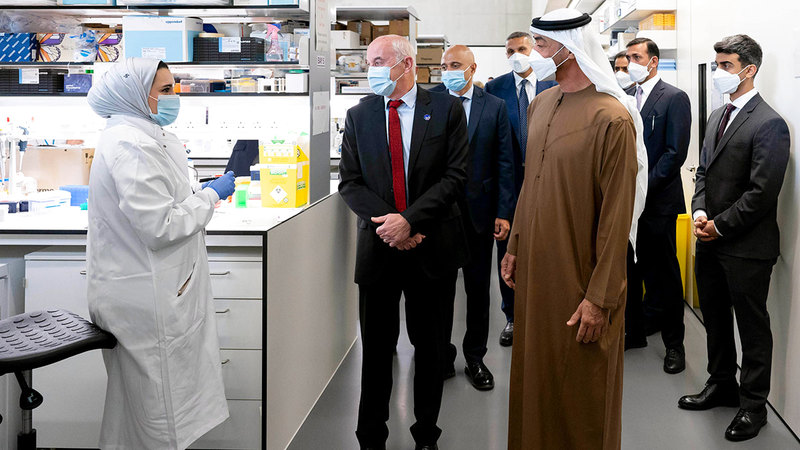 He thanked the doctors, researchers, nurses and staff for their dedication to helping sick children

His Highness Sheikh Mohamed bin Zayed Al Nahyan, Crown Prince of Abu Dhabi and Deputy Supreme Commander of the Armed Forces, yesterday visited the Zayed Center for Research on Rare Diseases in Children, on the sidelines of his visit to the United Kingdom.

During his meeting with the doctors, professors and researchers working at the center, His Highness Sheikh Mohamed bin Zayed Al Nahyan was acquainted with the center's research, and the innovative treatments it offers to save the lives of sick children from different countries of the world.

His Highness was briefed on the unique model of pediatrics adopted by the center, the first of its kind in the world, which combines advanced research and world-class medical care under one roof, which contributes to accelerating the diagnosis and treatment of rare diseases that affect children.

His Highness toured the main laboratory, which includes 140 test benches that accommodate researchers to conduct studies and research, and the laboratory of the genomics team.

His Highness was briefed on the center's specialized facilities, which played a vital role in the global response to the challenges of the "Covid-19" pandemic.

His Highness said in a tweet on Twitter, posted after his visit to the center yesterday: "During my visit to the Zayed Center for Research in Rare Diseases in Children, I was informed of the innovative treatments and pioneering research that the center is conducting to save the lives of patients.

I extend my thanks and appreciation to the doctors, researchers, nurses and staff for their dedication to helping sick children from all over the world.”

The disease-causing gene study unit had recorded the sequence of 15,500 genome samples that cause the “Covid-19” virus, in order to inform scientists about the changing nature of the virus, and the effect of new and reused drugs and drugs in treating serious viral infections in children.

His Highness also learned from those in charge of the Zayed Center for Research in Rare Diseases in Children the importance of specialized and advanced research rooms, which represent the largest academic unit for the development of gene therapy and cell therapy in the United Kingdom, and one of the largest facilities in the world for the production of materials used in pioneering gene therapy experiments.

During the tour, His Highness met the researcher at the Zayed Research Center, Mohammed Al-Amiri, a candidate for a PhD in epigenetics for the diagnosis of leukemia in children from University College London.

He praised him for his valuable research on how to modify the DNA of cancer cells in the patient's body to treat cancer patients.

His Highness Sheikh Mohammed bin Zayed Al Nahyan, during his tour of the center's facilities, also met the 10-year-old child Ali Al Ketbi, who is currently undergoing treatment at Great Ormond Street Hospital, and his health condition is constantly improving.

His Highness expressed his best wishes to the child Ali for a full recovery, and his sincere thanks and appreciation to the hospital staff for their good care of the children.

It is noteworthy that the Zayed Center - which celebrates the second anniversary of its opening next November - was established thanks to a grant of 60 million pounds sterling provided by Her Highness Sheikha Fatima bint Mubarak, President of the General Women's Union, President of the Supreme Council for Motherhood and Childhood, and Supreme Chairwoman of the Family Development Foundation.

The center is the result of a partnership between Great Ormond Street Hospital, University College London and Great Ormond Hospital Children's Charitable Foundation.

• Mohammed bin Zayed praised Mohammed Al-Amri's research on how to modify the DNA of cancer cells.. He met the child Ali Al-Ketbi, who is undergoing treatment at Great Ormond Street Hospital.