The first observation·moment丨Two gazes on the Loess Plateau 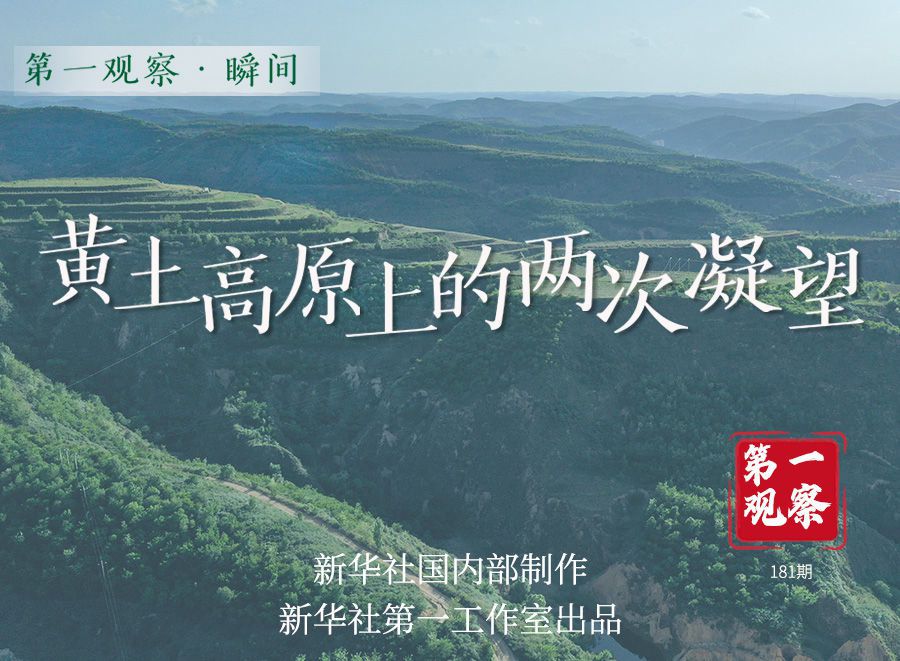 The shot of Xinhua News Agency reporters freezes such a moment--

On a hill in Gaoxigou Village, the general secretary raised his eyes and stared.

Under the blue sky and white clouds in autumn, the ditches and ridges of the Loess Plateau are draped in green, full of vitality.

Nowadays, not only Gaoxigou Village, but the entire Loess Plateau is becoming green.

This is the second time since the 18th National Congress of the Communist Party of China that the General Secretary has come to the Loess Plateau in northern Shaanxi.

On the eve of the Spring Festival in 2015, he returned to Liangjiahe to visit his father and villagers.

On a section of the mountain road in Liangjiahe, the general secretary stopped and looked up.

He pointed to a row of cave dwellings in a ravine in the distance and said, that is where I lived. "It is these cliffs that temper my will."

On the night when he returned to Yan'an from Liangjiahe, he presided over the Shaanxi-Gansu-Ningxia Revolutionary Old Area Poverty Alleviation and Enrichment Symposium, deployed poverty alleviation and development work in the old area, and emphasized ensuring that the people in the old area join the people of the whole country to enter a well-off society in an all-round way.

This is a true love that deeply cares about the Yellow Earth.

In 1969, Xi Jinping, who was under 16 years old, came to the Loess Plateau and spent 7 years as an educated youth here.

Together with his fellow villagers, he digs wells, repairs silt dams, repairs terraces, and builds biogas digesters to improve production and living conditions.

In more than 2,400 days and nights in northern Shaanxi, Xi Jinping and his fellow villagers mined together, forged a deep relationship, increased their knowledge and skills, and tempered their will and character.

In a reminiscence article, Xi Jinping said: "Northern Shaanxi Plateau is my root, because here has cultivated my unchanging belief: to do things for the people!" "No matter where I go, I will always be the son of the Yellow Land." ."

The journey is thousands of miles, dependents and time.

After leaving the Loess Plateau, Xi Jinping has always been concerned about the plants, the ditch and the fork, and the ridges and beams here.

From 1975 to 2015, Xi Jinping returned to Liangjiahe in 1993 to visit his father and villagers. He wrote back to Liangjiahe Village 4 times in 2007, 2008, 2011, and 2014, expressing his thoughts and encouraging the villagers to spend their lives. It's getting more and more prosperous.

Time flies, the original intention is the same, and the firm will to do practical things for the people will last longer.

Since the 18th National Congress of the Communist Party of China, General Secretary Xi Jinping has spent the most time and energy on poverty alleviation. He is very concerned about the poverty and prosperity of the people in the old Soviet areas, including northern Shaanxi.

In May 2019, with the withdrawal of Yanchuan and Yichuan counties from the poverty-stricken counties, Yan'an bid farewell to absolute poverty, and the Yellow Land witnessed another miracle in the history.

The folks have already realized the simple dream of "eating fine grains if you want to eat fine grains, and eating meat often".

What kind of development will be achieved?

In May 2020, during the National Congress of the People’s Republic of China, General Secretary Xi Jinping revealed his heart in this way: “Our generation has such a complex, we must support our people, especially our peasants, and there is no shortage of them on the road to socialism. , Common prosperity, comprehensive well-off, let us walk this path together."

History has opened a new chapter.

This year is the 100th anniversary of the founding of the party, and General Secretary Xi Jinping once again set foot on this yellow land.

From the mountains and the green to the people's pockets, from getting rid of poverty and being well-off to starting a new journey of building a socialist modern country in an all-round way, the yellow land is bred with vitality, and a more splendid picture is unfolding in the new era.