Pediatricians are generally positive that children between the ages of 12 and 15 should now be offered a vaccine against covid-19. At the same time, the message could have come earlier, some say. - It would have been even better if we started before school started, but it is not too late, says the Swedish School Medical Association's chairman Josef Milerad. 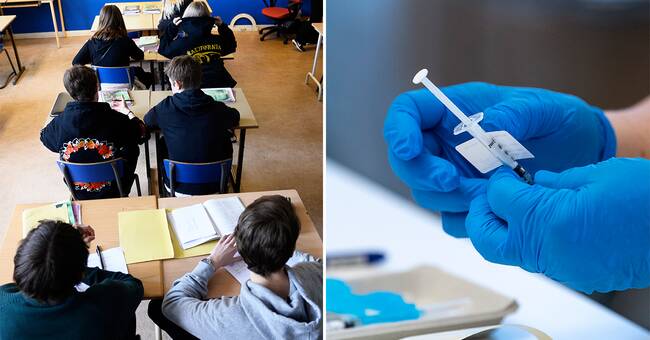 The vaccination of the younger age group will start after the autumn holidays in early November, the government and the Public Health Agency (FHM) announced at a press conference on Thursday.

- We look at this with satisfaction because the decision has about the same motivation as our letter that went to the Public Health Agency two weeks ago.

Hellström-Westas also says that they have not pursued the issue themselves, but that they have received many questions from, among others, authorities, parents and colleagues, and that there are many and long discussions within the organization about advantages and disadvantages.

- The advantages of vaccinating children are that fewer children become ill and that they can then complete school, which has been a problem.

- The vaccination is a recommendation.

Children should be vaccinated for their own sake.

"Wise, even if it took a while"

Josef Milerad is chairman of the Swedish School Medical Association and senior lecturer in pediatrics.

In June, he wrote a debate article in Svenska Dagbladet together with two professors of medicine, where they criticized what they described as belated action by the government and FHM's side during the pandemic.

Milerad also welcomes today's message, but maintains that it could have come earlier.

- It is a very wise decision, even if it has been a while.

At the same time, I can see the positive that we had such a debate.

It may have been necessary for it to take time for everyone to get on the boat, he says.

Want to see cooperation with the schools

According to Josef Milerad, it will take time to get the vaccination started.

An earlier message could have given those involved more time to prepare, he says.

He sees it as crucial that regions cooperate with the schools, something that also the Minister of Education Anna Ekström (S) raised during today's press conference.

- I do not think it is possible to implement this without collaboration with student health and schools.

This is where the children are, but also great experience of mass vaccinating children.

It was good that Ekström mentioned it right away, says Milerad.