The curtain came down on New York Fashion Week for the spring and summer of 2022, and witnessed the resumption of the shows in the presence format with the presence of an audience, after an interruption of 18 months due to the “Covid-19” pandemic. 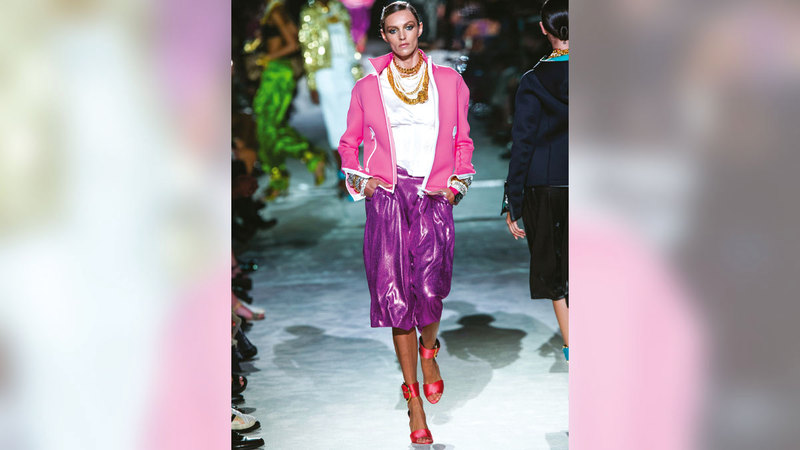 The curtain came down on New York Fashion Week for the spring and summer of 2022, and witnessed the resumption of the shows in the audience format with the presence of an audience, after an 18-month hiatus due to the “Covid-19” pandemic.

After the virtual shows dominated two editions of Fashion Week due to the pandemic, fashion houses reported the richness of the decorations provided by New York to hold shows in the presence of the audience, as did Laquan Smith, one of the most prominent emerging black designers, who set up on the roof of the Empire State Building a presentation of a collection that was overshadowed by dresses Short and bare shoulders.

But the green nature was the most prominent framework for embracing this week's shows, and it is the first that has been held almost naturally since the pandemic.

Colina Strada, whose designs are sustainable through the use of recycled materials, put on a show marked by joyful chaos in a rooftop orchard in downtown Brooklyn.

As for Ola Johnson's show, which was held at the Botanical Garden in Brooklyn, it seemed more traditional.

And the Tory Burch show was held on Sunday in front of the American designer store in Soho, one of the most prestigious neighborhoods in New York City, but the place was turned into a fruit and flower market.

Between apple stalls and booksellers' tables, Burch has launched a collection that pays homage to American designer Claire McCardle, fitting in the House's tradition of elegant and ambitious women.

Although designer Tom Brown has preferred for years to hold his shows in Paris, this time he wanted his designs to land in New York, explaining that his choice of the city is a way to support the American Fashion Show, which opens tomorrow at the Fashion Institute at the Metropolitan Museum of Art, which coordinates Shows him his life partner Andrew Bolton.

The presentation of his collection was a musical tale, and the participants in it, whether women or men, were not just models, but each embodied one of the characters of the story.

In a magical garden, against the background of the sound of a music box, the sober color of the collection's outfits, including coats, jackets, skirts and trousers, prevailed, but this sobriety in color was pierced by flowers painted on the faces of the models or pinned to their hair.

The return of Altuzarra

Joseph Altuzarra also returned to New York, after performing in Paris, where he grew up.

Doubtful flowers and lace necklaces dominated most of the designs at his New York show, which was opened Sunday by star Gigi Hadid.

"I wanted to be a part of bringing life back to the New York catwalks, and also to the city itself," he said.

He considered that the return through a fashion show «is the best way to be to participate in this return».

The Metropolitan Museum opens tomorrow the first chapter of its major retrospective on American fashion.

In this context, the Metropolitan Museum's Gala Dinner will be held on Monday evening and is a great social event in New York, and an opportunity for fashion houses to dress up the stars who show off their designs on the red carpet.

This dinner was canceled last May due to the “Corona” virus.

The tradition of the celebration dictates that the clothing be related to the theme of the upcoming Metropolitan Museum exhibition. This year's celebration aims to renew the museum's image.