When the People's Party, now the Liberals, proposed a language test to obtain Swedish citizenship, it was a "magnet for xenophobic voters", wrote Minister of Justice and Migration Morgan Johansson (S) in his blog in 2008. Today, the language requirement is part of the Social Democratic government's own migration policy. - I have changed my mind, says Morgan Johansson in SVT's "30 minutes". 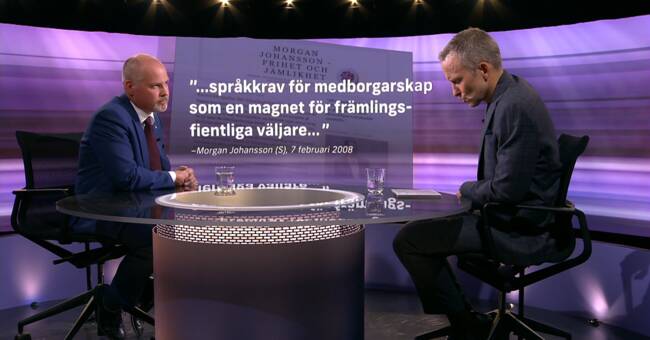 This summer, the Riksdag hammered through the government's proposal for a future migration policy.

The changes mean, among other things, that requirements must be set for knowledge of Swedish and social studies in order to obtain a permanent residence permit.

In "30 minutes", Morgan Johansson admits that his opinion on the issue has fluctuated over the years.

- I have changed my mind.

The opportunity to speak the language that most others do in our country is a key to integration.

And it is reasonable to set that requirement if you are to have a permanent residence permit, says Morgan Johansson.

When the then Alliance Government with Fredrik Reinfeldt in 2008 wanted to introduce the same requirement, Morgan Johansson wrote in his blog that the proposal was a "magnet for xenophobic voters".

The proposal, which originally came from the then People's Party, was "deplorable in its studied misery".

- It is clear that it was hard to say when you see it like this almost 20 years later, says Morgan Johansson.

Hear Morgan Johansson about his swing in the question of language requirements in the clip.