Former US gymnastics team doctor's sexual assault case: the victimized Olympic athlete denounces the FBI for "do nothing"

China News Service, September 16 reported that the U.S. Senate Judiciary Committee is investigating the FBI's negligence in handling the sexual assault of the gymnastic team doctor. On the 15th, four gymnasts including McKayla Maroney and Simone Biles attended the hearing. They reprimanded the FBI for doing nothing during the investigation, which allowed the abuse of criminals to continue. Data 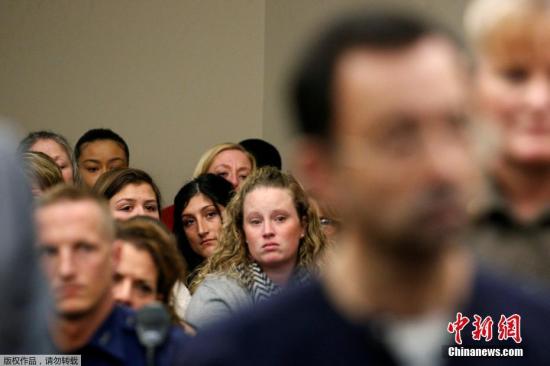 China News Service, September 16 reported that the U.S. Senate Judiciary Committee is investigating the FBI's negligence in handling the sexual assault of the gymnastic team doctor.

On the 15th, four gymnasts including McKayla Maroney and Simone Biles attended the hearing.

They reprimanded the FBI for doing nothing during the investigation, which allowed the abuse of criminals to continue.

Data map: On January 25, 2018, the former team doctor of the US Olympic gymnastics team was sentenced to 175 years and more than 100 women accused of sexual assault.

Before the sentencing, Nassar apologized to his victims in court, including Olympic gold medalist Byers and others, as well as many female athletes from Michigan State University where he worked.

According to reports, Maroni told members of Congress that after she reported to FBI agents that she had been sexually assaulted by gymnast doctor Larry Nassar, the FBI did not take any investigation.

She believes that the detective involved should be prosecuted.

She recalled that in 2015, she spent hours on the phone telling the FBI about her victimization, and her mother had never even heard her say it, including a statement about the sexual assault by Naxal during the London Olympics.

"And they allowed a child molester to go unpunished for more than a year. This inaction directly allowed Naxal's abuse to continue."

Byers, one of the victims of the Naxal case and an Olympic champion, also complained at the hearing that he felt "betrayed by the FBI, and we should get an answer."

In this regard, the chairman of the Senate Judiciary Committee and Democratic Senator Richard Durbin of Illinois pointed out that the FBI’s handling of the case was a “stain” of the bureau. “During the 15 months that FBI officials shirk responsibility, Nassar abused At least 70 young athletes."

He worked at Michigan State University from 1997 to 2016 and served as a team physician for the US gymnastics team in four Olympic Games.

The FBI was accused of failing to deal with the complaint against Naxal in a timely manner.

The FBI accepted the investigation of the Naxal invasion in July 2015 after Penny, the president and CEO of the United States Gymnastics Association, reported to the Indianapolis office of the FBI.

However, the Indianapolis office of the FBI, which was headed by W. Jay Abbott, did not initiate an investigation. Only one witness was interviewed in September 2015, and the content of the interview was not officially reported until The official report numbered 302 was only released in February 2017.

However, Nassar was accused of possessing child pornography as early as December 2016.

In 2018, Nassar was sentenced to up to 175 years in prison and admitted to sexually assaulting hundreds of girls and women.

On July 14, 2021, the Inspector General of the U.S. Department of Justice stated that the FBI made a "fundamental" error in investigating the sexual assault case and did not handle the case "seriously."

The FBI admitted at the time that this error was "unforgivable" and was a "shame" to the agency.

According to US media, the US Department of Justice has not yet filed charges against the two former FBI agents most closely related to the case.

Among them, Ai Boot had previously resigned, and another agent was fired.