1,400 dolphins were slaughtered - now the Faroe Islands are reviewing the hunt

The Faroese government will review the rules for dolphin hunting around the archipelago, the country's government announces. The news comes after photos and clips from the hunt provoked anger and protests this week, not least on social media. 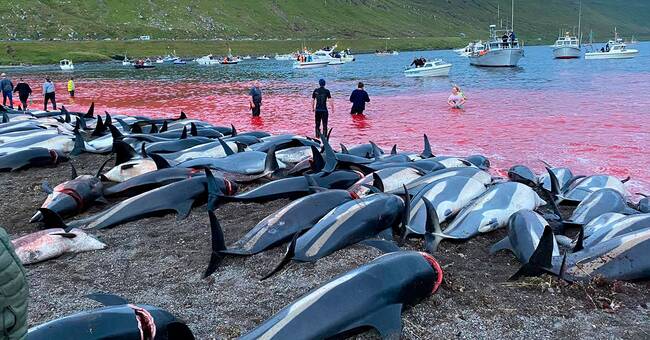 The incident that led to the government's stance occurred on Sunday.

Hunters on the island of Eysturoy then used boats to drive a large herd of white-tailed dolphins into a bay.

At the shore it stopped and the slaughter began.

1,428 dolphins were killed, according to the Faroe Islands' whaling association.

Since then, images from the hunt have been widely circulated.

The pictures were published by the environmental organization Sea Shepherd, and show how slaughtered dolphins were lined up on a beach while the sea was colored red by the blood.

"Should have known better"

The approach itself is not unusual in the Faroe Islands.

Vitsidingen is not threatened with extinction either.

What provoked reactions is rather how the slaughter itself took place.

The Faroese government describes how the herd was several times larger than during previous hunts, which led to "great difficulties" when it reached land.

Other assessors draw the same conclusion.

- The herd was too big, and there were too few people on the beach who could receive them.

As I see it, there were so many that it was impossible to slaughter them in a reasonable way, says the Faroese Storting member Sjurdur Skaale to DR.

Someone should have known better.

Most people are shocked by what happened, says Olavur Sjurdarberg, chairman of the Faroe Islands' whaling association, to the BBC.

The government wants to differentiate between species

The criticism has now found its way all the way up to the Faroe Islands government, which announces that they will review the rules for the hunt.

"We are taking this seriously.

Even if the hunt is considered sustainable, we will take a closer look at what role it should play in our society ", writes the Prime Minister Bardur a Steig Nielseni in a statement.

At the same time, there is public opinion that the hunt should continue under current rules.

Hunting for smaller whales is a tradition that stretches far back in the history of the Faroe Islands.

It is also an important part of the country's food supply, as one of the few foods that do not have to be imported.

The government also emphasizes this image, but also wants to distinguish between whales and whales.

“The gate whale hunt is an ancient and important part of the Faroe Islands' food culture.

The pursuit of white supremacy has not been part of our tradition in the same way ", the government writes.