"The Cold War is still going on": why does the candidate for US ambassador to NATO consider Russia the main threat

Russia in the next ten years will be the main military threat to the countries of the North Atlantic Alliance. This was announced in the US Senate by the candidate for the post of the country's permanent representative to NATO Juliana Smith. She stated that "Russian aggression continues" and that Washington should hold Moscow accountable for its actions. Experts note that the American political establishment is promoting the model of behavior in relation to the Russian Federation that was used during the Cold War. 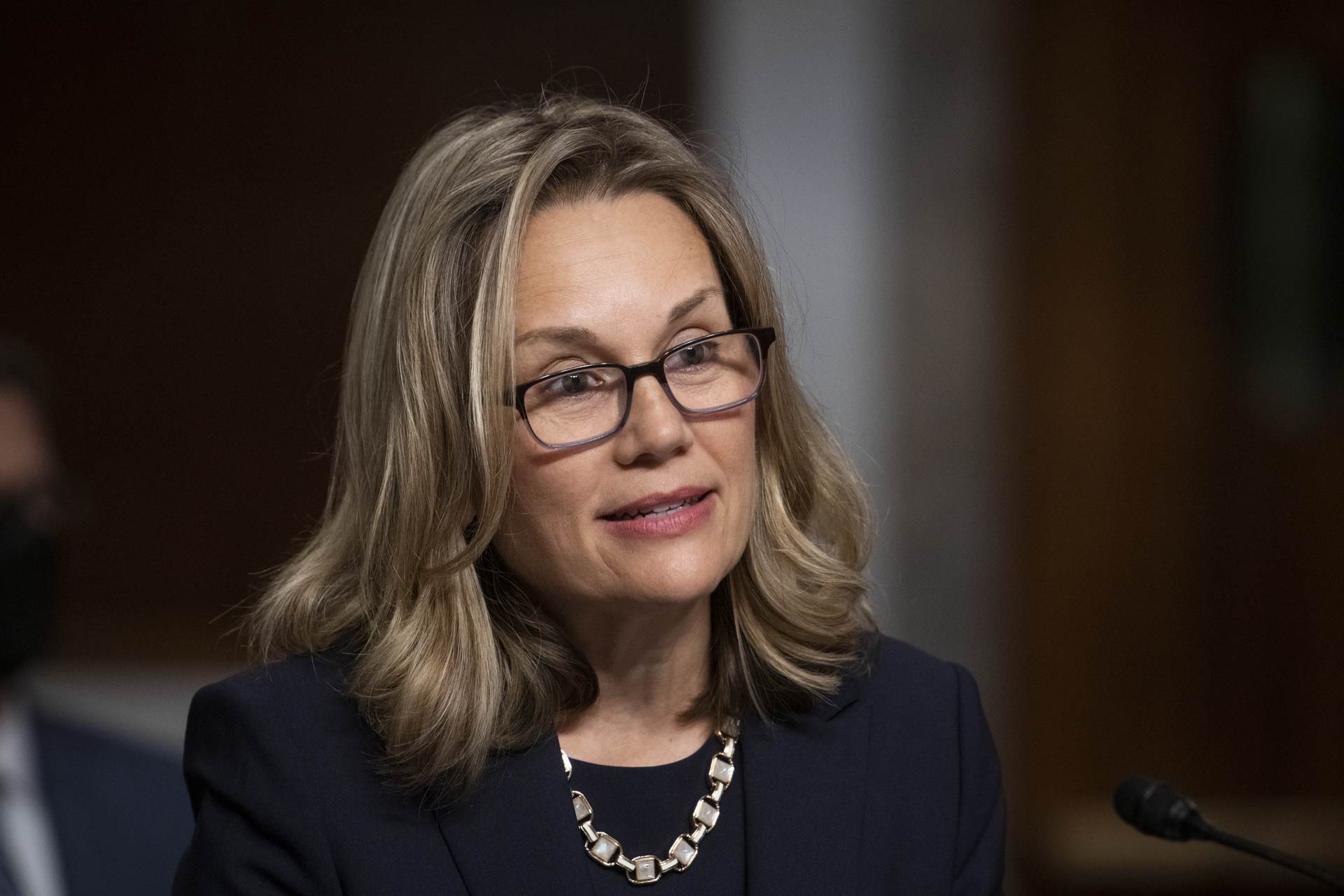 Russia will pose the main military threat to NATO over the next decade.

This was stated by Juliana Smith, a candidate for the post of US Ambassador to the North Atlantic Alliance.

“Russia is still the largest geopolitical threat to the Euro-Atlantic region and will certainly remain the biggest military threat to the NATO alliance for the foreseeable future and, of course, for the next decade,” Smith said.

With such a statement, she made a hearing at the Senate Foreign Relations Committee, where her candidacy was confirmed.

When asked by a senator about Russia, Smith added that "since the Russian invasion of Ukraine in 2014, NATO has done a lot to strengthen its deterrence and defense strategy," but "there is still a lot of work to be done."

We must hold Russia accountable for its actions taken using all of its tools, whether it is about conventional capabilities, incursions into NATO airspace, acts of intimidation or cyberattacks, ”said Juliana Smith.

During the Barack Obama administration, she served as director for Europe and NATO at the Pentagon, and was also Biden's national security adviser when the latter was US vice president.

Smith has repeatedly made policy statements in which she singled out Russia as a threat to the interests of Washington and NATO.

For example, in her speech to the Senate Foreign Relations Committee at a hearing on Russia in 2017, she stated that Moscow allegedly wants to undermine the basis of the entire Euro-Atlantic system of the world order.

“Russia is pursuing a complex long-term strategy aimed at undermining the rules-based order that the United States and its allies created after World War II.

Russia's tactics are aimed at undermining our democratic institutions, sowing a split in NATO and the EU and establishing its own sphere of influence, ”she told the senators.

According to Smith, "President Putin will only be satisfied with the split of the alliance and the undermining of the transatlantic unity, and this has been very clearly manifested in recent years."

“We should deprive him of the opportunity to succeed in this and interact with Russia from a position of strength,” the politician said.

Looking for a strategy

At the hearings on her candidacy for the post of US Permanent Representative to NATO, Smith said that, if approved, she would seek to ensure that threats allegedly connected with the Russian Federation, including in cyberspace, were noted in the strategic concept of the alliance.

“This document should reflect today's changing security environment, especially Russian aggression, threats in cyberspace, as well as malicious actions of the People's Republic of China in the Euro-Atlantic region,” she said in her opening address to the committee members.

NATO's Strategic Concept is a basic document that defines the goals and objectives of the alliance's development for the next 10 years.

The current strategic concept was adopted in 2010 at the summit of the bloc in Lisbon and defines relations with Russia as a strategic partnership.

“NATO's cooperation with Russia is of strategic importance as it contributes to the creation of a single space of peace, stability and security.

NATO poses no threat to Russia.

On the contrary, we want to see a truly strategic partnership between NATO and Russia, and we will act accordingly, expecting reciprocity from Russia, ”said the concept review published on the alliance's official website.

It also stated that the relationship between NATO and Russia is based on the goals, principles and commitments contained in the NATO-Russia Founding Act.

“Despite differences on certain issues, we remain confident that the security of NATO and Russia is closely intertwined and that a strong and constructive partnership based on mutual trust, transparency and predictability would be in the best interests of our security,” the document said.

According to this concept, the leaders of the alliance were "determined to expand political consultations and practical cooperation with Russia in areas of common interest" and "to use the full potential of the NATO-Russia Council for dialogue and joint action with Russia."

We will remind that the Deputy Foreign Minister of Russia Alexander Grushko said earlier that the developed strategic concept of NATO, which will replace the adopted in 2010, will return the security situation in Europe to the state of the Cold War.

The Russian diplomat announced this at the IX Moscow Conference on International Security, held in June.

“We see that NATO countries have decided to develop a new strategic concept.

If all those philosophical postulates that were fixed in the last document become the basis of this strategic concept, then, in fact, we will get a situation in the field of military security in Europe, which resembles in its basic approaches the situation of the Cold War, which we all tried with joint efforts overcome, "- quotes the words of Grushko TASS.

The Deputy Foreign Minister of the Russian Federation noted that in the latest declaration of the bloc member states, Russia was mentioned 63 times.

“If we remove all these paragraphs from this declaration, it will turn out that the real tasks of the alliance in the field of security are not visible.

The only new element is China, which has been declared a strategic challenge for the United States.

As one of the former high-ranking NATO officials said, Russia is close, and China is far away, therefore the Russian threat, or the threat from the East, should remain the main purpose of the alliance, ”Alexander Grushko stressed.

In an interview with RT, Andrei Sidorov, head of the department of international organizations and world political processes at the Faculty of World Politics at Moscow State University, emphasized that the Biden administration intentionally and deliberately returns the world to the situation that was created by the strategic confrontation between the United States and the USSR in the 20th century.

“The Cold War is still going on, and Biden and his team are returning the US to this pattern of behavior.

It assumes that there is a kind of free world dominated by the United States, and outside of it - global opponents of American politics.

Unfortunately, today Europe through NATO follows in the mainstream of the United States, therefore, the new concept of the alliance will undoubtedly spell out the threat that Russia allegedly poses, ”the expert emphasized.

In turn, leading researcher at the Center for Security Studies of the Russian Academy of Sciences Konstantin Blokhin, in a conversation with RT, noted that bureaucrats from the Washington establishment continue to promote this position in order to maintain the status quo of the new Cold War, in which they feel as comfortable as possible.

“Moreover, given that politicians of the Cold War era are now in power, the White House administration will resort to algorithms and models well-tested in the second half of the 20th century,” the political scientist explained.

If in the Euro-Atlantic direction Russia was designated as the main threat, then, globally, China is the main rival for the United States, Konstantin Blokhin emphasized.

This line of behavior towards Russia again gained relevance in the United States after the reunification of Crimea with the Russian Federation, since in Washington it was considered a signal that Moscow had regained power after the collapse of the USSR, the expert added.

"In general, for American politicians, any country that tries to pursue its sovereign foreign policy line and, accordingly, does not follow the path of US foreign policy, is a challenge and a certain problem," the interlocutor of RT concluded.