The Environment Agency in Abu Dhabi has launched an ambitious project, implemented for the first time, aimed at counting and numbering the old and threatened trees in the natural environments and habitats of Abu Dhabi, through a dual program, which includes giving each tree an identification plate, carrying serial numbers, classified according to the type of tree. 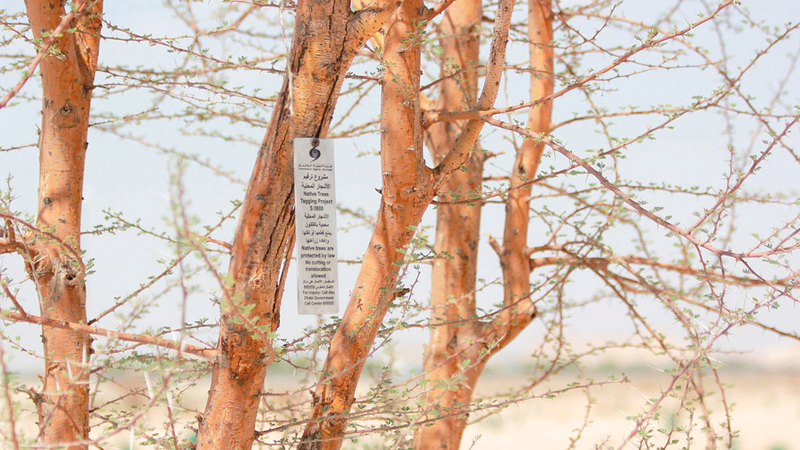 In order to protect and preserve the natural heritage

Numbering trees and linking them to geographical databases.

The Environment Agency in Abu Dhabi has launched an ambitious project, implemented for the first time, aimed at counting and numbering old and threatened trees in Abu Dhabi's natural environments and habitats, through a dual program, which includes giving each tree an identification plate, carrying serial numbers, classified by tree type, and numbering Electronically, identifying them with serial numbers and symbols linked to geographical databases.

The Secretary-General of the authority, Dr. Sheikha Salem Al Dhaheri, said that the project aims to number local trees of important environmental and heritage value, including Ghaf and Samar trees, explaining that the authority has begun counting the targeted tree species through satellite and aerial images, taking coordinates for each tree and storing them, within databases. Geographical, followed by an actual numbering of the perennial trees.

She indicated that the program will start from Jebel Hafeet National Park in Al Ain, in which the authority is implementing an integrated project to rehabilitate the habitats of spruce trees in areas affected by climatic changes and illegal encroachments, and the encroachment of infrastructure development projects on natural habitats, adding that the authority plans to number 1500 A perennial Samar tree in the park as a first stage, in addition to another 1,500 Ghaf trees scattered across the emirate, by the end of the year, where specially designed metal panels will be used for this purpose.

Al Dhaheri stated that the authority seeks to achieve its environmental and cultural goals, which are to protect local trees from illegal encroachments, as the project contributes to enhancing the quality of available data on local trees in natural habitats, because the project will document a detailed assessment of the condition of each perennial tree, and detailed measurements of the tree dimensions. their heights, and evaluating their vegetative group to find out the extent of their positive impact in resisting desertification and improving air quality.

The Acting Executive Director of the Terrestrial and Marine Biodiversity Sector, Ahmed Al-Hashemi, stated that the numbering of perennial trees is one of the main pillars from which the authority will set out to develop long-term protection plans for local trees, to ensure their sustainability, as they are a symbol of natural heritage and distinguished cultural heritage.

Al Hashemi pointed out that the samar and natural ghaf trees are among the important components of the plant biodiversity in the country, as these two species have been classified among the threatened plant species in the Emirate of Abu Dhabi, noting that the authority has prepared detailed maps of the spread of both ghaf and saffron in Abu Dhabi, which are considered For the first time in the country, documenting the locational spread of Ghaf and Samar trees, and each of them, was completed using satellite image analysis.

Al-Hashemi added that the authority is checking the number of trees that were monitored through aerial image surveys in the field, through which, for the first time at the state and regional levels, a site survey of about 100,000 wild trees was carried out, and the extent to which they relate to natural habitats, soil salinity and groundwater, and their availability. Within the network of nature reserves in the emirate.

Al-Hashemi stressed that analyzing this information contributes to understanding the environmental requirements of these species, and determining the extent of the dangers they are exposed to, whether due to human, natural or climatic activities, and thus providing protection for these trees, and working to monitor them within their natural habitats to ensure their sustainability.