Led by Philip Rosenthal, Somebody Feed Phil is one of Netflix’s most popular food programs. Now the series has finally arrived in Finland. 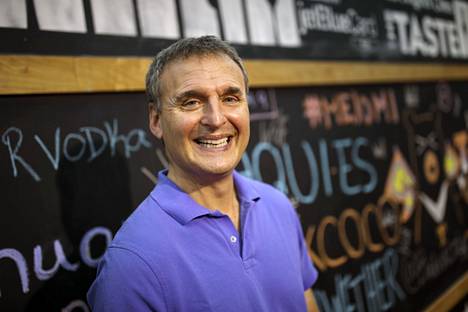 In the food tourism-based program, Philip Rosenthal from the United States will tour different cities around the world to learn about new tastes and different food cultures.

During the four production seasons, he has already visited Bangkok, Lisbon, Venice and London, among others.

Helsinki will be next in the spotlight.

Philip Rosenthal, more commonly known as Phi, is also known as the creator of the Everyone Loves Raymond comedy series.

Rosenthal got to taste Finnish flavors at the cheese shop Juustoansa, where he was helped and served by the store's owner Laura Salonen.

The trader found out about the production group's result only two days earlier.

- On Monday, we planned what delicacies we could offer Phil.

Then on Wednesday they came to visit, Salonen says.

The production team visited the Old Market Hall at least in cheese, meat and fish stores.

In addition, the food traveler got to experience rye bread with Mustaleima Emmental as well as Christmas pepper with aura cheese and apple.

- The whole production team went wild with a pair of Christmas peppers and asked for it for many more rounds, Salonen says with a laugh.

And it didn’t sink badly either.

- He looked a little confused as he dipped it in coffee, but politely said he liked it.

Fried, he took it even more.

Salonen opened his Cheese store in the Old Market Hall in January 2020, just before the corona, and the young entrepreneur was immensely warmed by the world star's interest in his small cheese shop.

- He asked a lot about my shop and was terribly impressed that I spontaneously became a cheese trader.

I was really glad that they just chose us for the program.

According to Salonen, in addition to his cheese shop, Rosenthal's filming team visited the meat and fish shops in the Old Market Hall, where the program is known to have tasted at least gravy fish and leather goods.

- I could guess that you could also taste the reindeer, Salonen says.

- I don't often perform on TV, but when I perform it comes to Netflix around the world, Laura Salonen wrote on Twitter on Wednesday.

Getting into Neflix production was a memorable experience for Salonen, also because he is a big fan of that series and has seen every episode of the program.

- It was a really fun experience.

The cheese merchant was subjected to a corona test before filming began, but he was nevertheless prepared for a short distance due to the prevailing disease situation.

He immediately came to hug and after the filming he himself suggested joint pictures.

He was very familiar and immediately captured his armpit, Salonen says with pleasure.

The film crew could not yet tell Salonen when the Helsinki episode would be seen on Netflix.

However, it is part of the fifth production season of the program, which is currently being done.

There are currently four previous seasons on Netflix.

- I am really proud of how he praised Finland and Finnish tastes.

It's a really hard thing for Helsinki to have its own episode, Salonen glows.

Laura Salonen is happy with the attention she has received from her small cheese shop. - I am proud that we have survived this Korona period, Salonen says. Photo: Laura Salonen