Pope Francis returns to the Vatican: "Marriage is a sacrament, it is only between man and woman"

"Abortion is murder but bishops are pastors and not politicians", says Bergoglio on the flight that brought him back to Rome from Bratislava 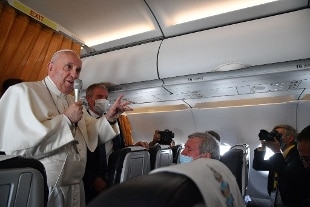 September 15, 2021 An intense journey, the first since the surgery last summer. It is on the plane that takes him back to the Vatican that the Pontiff takes stock of the days spent between Hungary and Slovakia. Addressing issues that involve politics but also the lives of millions of faithful.

Marriage is between a man and a woman

During the press conference on the flight from Bratislava to Rome, Pope Francis addressed the question of union between homosexuals. "I was clear: marriage is a sacrament and the church does not have the power to change the sacraments as the Lord has instituted them. There are civil laws that try to help the situation of many people of different sexual orientation. It is important that they help each other, but without imposing things that in the church by its nature do not go. If two homosexuals want to spend their lives together, States have the possibility civilly to support them, to give them security of inheritance and health. But marriage is marriage and does not mean condemning them, please, they are brothers and sisters and we must accompany them but it is clear, marriage is man and woman, we must respect everyone, but church does not deny its truth.Many approach to ask priests for advice that helps them to go on with their lives ".

Abortion is murder but bishops are pastors and not politicians

"Abortion is murder" but the bishops must be "pastors" and not "politicians". So again Pope Francis on the return flight from Slovakia to journalists regarding the debate within the US Bishops' Conference, whether to deny communion to Catholic politicians in favor of the positions of the 'pro-choice', including President Joe Biden. The Pontiff reiterated that those who practice abortion "kill" but criticized the position of some Catholic bishops who want to deny communion.

The interview with Orban

"Orban came to me, he had this kindness, this kindness is the third time I meet him". In the meeting in Budapest with the Hungarian premier, he said, "the president spoke. The first theme was ecology, a hat for you Hungarians, with a really great ecological conscience. Then I asked about the average age, I am worried about the demographic winter. In Italy the average is 47 years and I think that in Spain it is even worse, so many villages are empty it is a serious concern. The president explained to me the law to help young couples with children. immigration nothing, we have not talked about the family, in the sense that we see that there are many young people, many children, even in Slovakia.Now the challenge is to look for jobs so that they don't go out looking for work. It was good weather, it lasted quite 50 minutes. "

On the last day of the trip to Slovakia

"In front of Jesus one cannot remain lukewarm, with 'the foot in two shoes'": Pope Francis said this during the mass at the sanctuary of Sastin (where 60 thousand participated), encouraging the faithful to spread "the good scent of welcome and solidarity, where personal and collective selfishness often prevails". The President of the Republic, Zuzana Caputova and Prime Minister Eduard Heger were present. It was the Pope's last day in Slovakia. After mass, Bergoglio drove to Bratislava International Airport and took the flight that brought him back to Rome in the early afternoon.

"Faith cannot be reduced to sugar that sweetens life. Jesus is a sign of contradiction. He came to bring light where there is darkness, bringing darkness out into the open and forcing them to surrender", warned Jorge Mario Bergoglio. . "This is why the darkness always fights against him. Whoever welcomes Christ and opens himself to him rises again; whoever rejects him closes himself in the darkness and ruins himself. Jesus told his disciples that he did not come to bring peace, but a sword: in fact his Word, like a double-edged sword, enters our life and separates the light from the darkness, asking us to choose ".

"In front of Jesus one cannot remain lukewarm, with 'the foot in two shoes'. To welcome him means to accept that he reveals my contradictions, my idols, the suggestions of evil; and that he becomes for me resurrection, the one who always lifts me up , who takes me by the hand and makes me start again. And it is precisely these prophets that Slovakia needs, you - Francis said to the pastors present at the Mass - bishops prophets who go down this path. It is not a question - he continued - of being hostile to the world, but to be 'signs of contradiction' in the world. Christians who know how to show, with their life, the beauty of the Gospel. Who are weavers of dialogue where positions become rigid; who make fraternal life shine, where often in the society divides and is hostile; which spread the good scent ofwelcome and solidarity, where personal and collective selfishness often prevail; who protect and guard life where the logic of death reigns ".

A firm church is a sick church

A firm church is a "sick" church, then remarked the Pope off the cuff while celebrating mass.

#PapaFrancesco: "It is not a question of being hostile to the world, but of being signs of contradiction in the world. Christians who know how to show, with their life, the beauty of the Gospel; weavers of dialogue, who spread the good scent of welcome and solidarity "#Slovakia pic.twitter.com/EirtWeKXI1