Observing summer grain and watching autumn grain, why did the general secretary inspect the grain growth twice during this year's inspection

First Observation丨Observing summer grains and watching autumn grains, why did the general secretary inspect the grain growth on the spot twice during this year's inspection   On September 13, General Secretary Xi Jinping visited Yulin, Shaanxi. He went to Gaoxigou Village, Yinzhou Street, Mizhi County, and went into the fields to observe the growth of crops. The green fields are full of vigorous 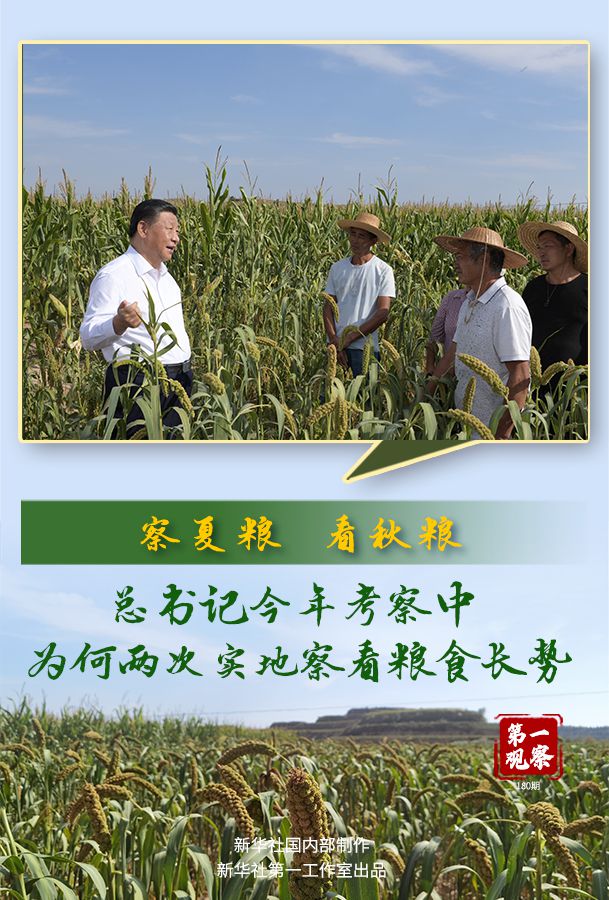 First Observation丨Observing summer grains and watching autumn grains, why did the general secretary inspect the grain growth on the spot twice during this year's inspection

He went to Gaoxigou Village, Yinzhou Street, Mizhi County, and went into the fields to observe the growth of crops.

The green fields are full of vigorous hope.

In May of this year, General Secretary Xi Jinping went into a wheat field to observe the growth of wheat during his inspection in Nanyang, Henan.

Seeing that a bumper harvest is in sight, the general secretary said that the summer grain harvest has been harvested, and the economy for the whole year will be underpinned.

On the afternoon of May 13, 2021, Xi Jinping, General Secretary of the CPC Central Committee, President of the State and Chairman of the Central Military Commission, inspected the South-to-North Water Diversion Project in Xichuan County, Nanyang City, Henan Province.

This is on the way, Xi Jinping temporarily got off the car and walked into the wheat field to observe the growth of wheat and understand the production of summer grains.

The main body of summer grain is wheat.

This year, my country’s summer grains have been harvested abundantly. Overcoming the effects of low temperature, drought, heavy rainfall, pests and diseases, the output of summer grains reached 291.6 billion catties, an increase of 5.93 billion catties over the previous year and a new record high.

The output of summer grain and early rice accounts for about 25% of the annual grain, and the bulk of the grain is still in autumn.

The importance of the autumn grain harvest is self-evident.

At present, the main autumn crops have entered the late stage of maturity, and the farmer says that "the 15th of July will determine the drought and flood, and the 15th of August the harvest."

This year's autumn grain production base is good, especially the area of ​​high-yield crops such as corn has increased significantly. Except for Henan, the disasters in most parts of the country are lighter than the previous year, and the autumn grain growth is better.

Agriculture is stable and the world is safe.

This year is the first year of the "14th Five-Year Plan". The comprehensive promotion of rural revitalization requires a good start, a good start, and stable food, to provide strong support for starting the new journey of building a socialist modern country in an all-round way.

In the context of epidemics and meteorological disasters that have exacerbated fluctuations in world food production, it is even more necessary to ensure domestic food security and consolidate and stabilize the fundamentals of agriculture.

"We must firmly grasp the initiative in food security, and we must pay close attention to food production every year." At the Central Rural Work Conference held at the end of last year, General Secretary Xi Jinping said.

The general secretary also put forward clear requirements such as "to strictly guard against the red line of 1.8 billion acres of arable land", "to make good use of the black land," and "accelerate the advancement of key agricultural key technologies."

Focusing on ensuring food security, from ideas to measures, we will make full efforts and speed up deployment——

The Central Economic Work Conference held in December last year regarded solving the problems of seeds and arable land as two key points, and pointed out that the key to ensuring food security lies in the implementation of the strategy of storing grain on the ground and storing grain on technology.

This year’s No. 1 Central Document further focused on implementing the same responsibility of the Party and government for food security, expanding the scope of pilot programs for complete cost insurance and income insurance for the three major food crops of rice, wheat, and corn, and launching food conservation actions.

In July of this year, General Secretary Xi Jinping emphasized when presiding over the 20th meeting of the Central Deep Reform Commission, “to raise the safety of provenance to a strategic height related to national security, concentrate on solving problems, make up for shortcomings, strengthen advantages, and control risks. ".

The food problem in a country with a population of more than 1.4 billion is an "eternal subject."

In a few days, our country will usher in the fourth "Chinese Farmers Harvest Festival".

Going to the fields to "see the grain" at this special time point shows the heavy weight of food security in General Secretary Xi Jinping's mind.

Nowadays, people's yearning for a better life has generally shifted from "has it" to "good or not", and the supply of food and other agricultural products should also be developed to high-quality, green and characteristic, and to achieve the transition from full food to delicious and healthy food.

Whether it is bulk food crops or small miscellaneous grains, all efforts must be made in variety cultivation, quality improvement, brand building and standardized production, so that the Chinese rice bowl is not only stable, but also able to taste a good Chinese taste of rice.