Message from many university presidents in China: Be a "pioneer" but not a "watcher", become a "dreamer" and become an "actionist"

China News Service, Hefei, September 15 (Reporter Wu Lan) At present, it is the beginning of the semester of major universities in China. The "First Lecture" of "Golden Sentences" by the university presidents at the opening ceremony of the 2021 freshmen became the focus of attention. Become an "action sect" before seeking knowledge   On September 15, at the 2021 freshmen opening ceremony and m 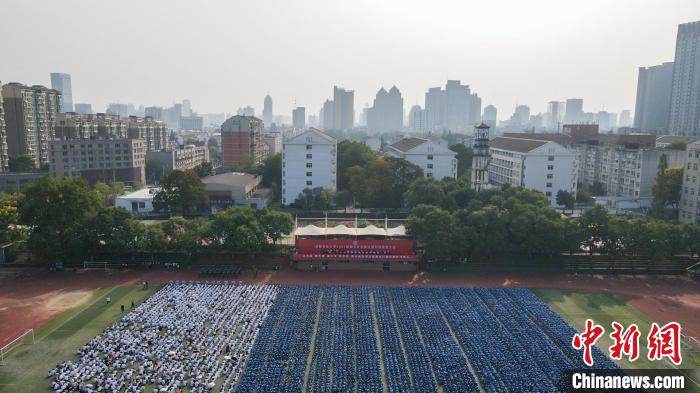 China News Service, Hefei, September 15 (Reporter Wu Lan) At present, it is the beginning of the semester of major universities in China.

The "First Lecture" of "Golden Sentences" by the university presidents at the opening ceremony of the 2021 freshmen became the focus of attention.

On September 15, at the 2021 freshmen opening ceremony and military training mobilization meeting of Anhui Agricultural University, Xia Tao, the principal of the school, encouraged more than 7,000 freshmen to stand out at critical moments and rush into danger. In the era of "Lou Cheng Yitong", "watchers" are striving to be newcomers of the era who can be the task of national rejuvenation.

Xia Tao hoped that the students would "go to the library and study room more, practice more, learn knowledge, and increase their talents." "Go to Internet cafes less, and use the circle of friends." "He said: "Especially graduate students, we must focus on the key technologies of agricultural science and technology innovation, do true scientific research, do scientific research, and produce innovative results to help science and technology become self-reliant and serve the revitalization of the countryside."

"I hope that students will not only become'dreamers', but also'actionists'." Bao Xinhe, president of the University of Science and Technology of China, raised hopes in the face of more than 1,900 freshmen from the school-to find the right era in the exploration of the world's scientific and technological frontiers Positioning to achieve self-reliance and self-reliance in solving national strategic problems.

Qiu Yong, president of Tsinghua University, hopes that the new students will maintain a vigorous vitality, abundance of life and a strong will to life under any circumstances, so that the vitality will always be fresh and prosperous.

Li Shushen, Secretary of the Party Committee and President of the University of the Chinese Academy of Sciences, said: “I hope that students will cultivate both academic ethics and morality; they are both vigorous and enterprising, but also tolerant. The road to scientific research is full of thorns. You must have the courage to break the boat and have the courage to go for it. The perseverance, the tenacity to hold on to the green hills, and the tenacity to hold on to the “initial aspiration”, to find the right “direction”, to endure the “loneliness”, and to endure the “loneliness”, to use hard work and abundance of righteousness to make the country prosperous and strong. Social progress, write down the footnotes of youth."

President Li Yanrong of Sichuan University told 9,137 new students that university is a turning point in life "from excellence to excellence".

Only by continuously expanding the boundaries of one's own knowledge and truly being precise and broad can one "the beauty and talents fly together, and the temperament can be cultivated together."

On the 15th, the opening ceremony of the 2021 freshmen of Anhui Agricultural University and the site of the military training mobilization meeting.

Bravely break into no man's land to be a "power generation"

At the opening ceremony of the 2021 undergraduates of the University of Science and Technology of China, Bao Xinhe praised Cao Yuan, alumni of the school's junior class.

Cao Cao discovered that the superconductivity of graphene has made a sensation in the international academic community and opened up a new field of research in condensed matter physics. He has become the youngest Chinese scholar to publish a paper as the first author in the 149 years since the founding of Nature. He recently won the 2021 Condensed Matter Physics award. The highest award for young physicists in the field.

Bao Xinhe said, Counting Cao Yuan's academic career, "opening up life" is not just about luck, it is full of choice, perseverance and hard work.

He encouraged the freshmen to plan their studies carefully, bravely enter the no-man's land and deep water areas for scientific research, pick up heavy burdens in struggle, and pursue excellence in exploration.

Li Shushen said: "I hope that the students will establish the consciousness of leading technology as soon as possible, be pioneers and not be spectators. On the platform of the fusion of science and education of the National University of Science and Technology of China, they will make real efforts, learn true skills, practice true skills, be mindful of the overall situation, and abide by the right way. Distinguish right from wrong and become the'power generation' who will solve the country's problems as soon as possible."

Zeng Yong, the president of the University of Electronic Science and Technology of China, reminded more than 5,000 freshmen not to care about the gains and losses of each test, and to learn to be generous; not to be "involved" in the so-called "competition" for profit, let alone become "exquisite egoists." .

Li Yuanyuan, President of Huazhong University of Science and Technology and Yin Yin urged 7088 undergraduate freshmen, as contemporary young people who are walking in the same direction in the new era, to pass the "faith barrier", "character barrier", "academic barrier", "cooperation barrier" and "emotional barrier", and strive to become Can be a great talent who can take on important responsibilities.

He said: "I hope that Tongji students will live up to their youth and youth, strengthen their ambition, backbone and confidence to be Chinese, and strive to grow into the optimistic pillar and pillar of the country and the nation." (End)