Hypersonic bureaucracy: why the Pentagon announced the "incredibly slow" modernization in the US military sphere

Because of bureaucracy and fear of risks, Washington is extremely slow to act in the military sphere in the face of competition with Moscow and Beijing. This was stated by the American General John Hayten. According to him, it would be possible to build up combat power at such a pace if the United States did not have potential adversaries. However, according to Hayten, this is not the case. He believes that China poses the greatest threat to the country, but there is also a danger allegedly emanating from Russia, which has significant nuclear forces. According to experts, America is lagging behind the Russian Federation and the PRC, primarily in the field of hypersound and the modernization of nuclear potential. Moreover, the United States will not be able to catch up with these two powers, since Washington does not have the necessary technologies, analysts say. 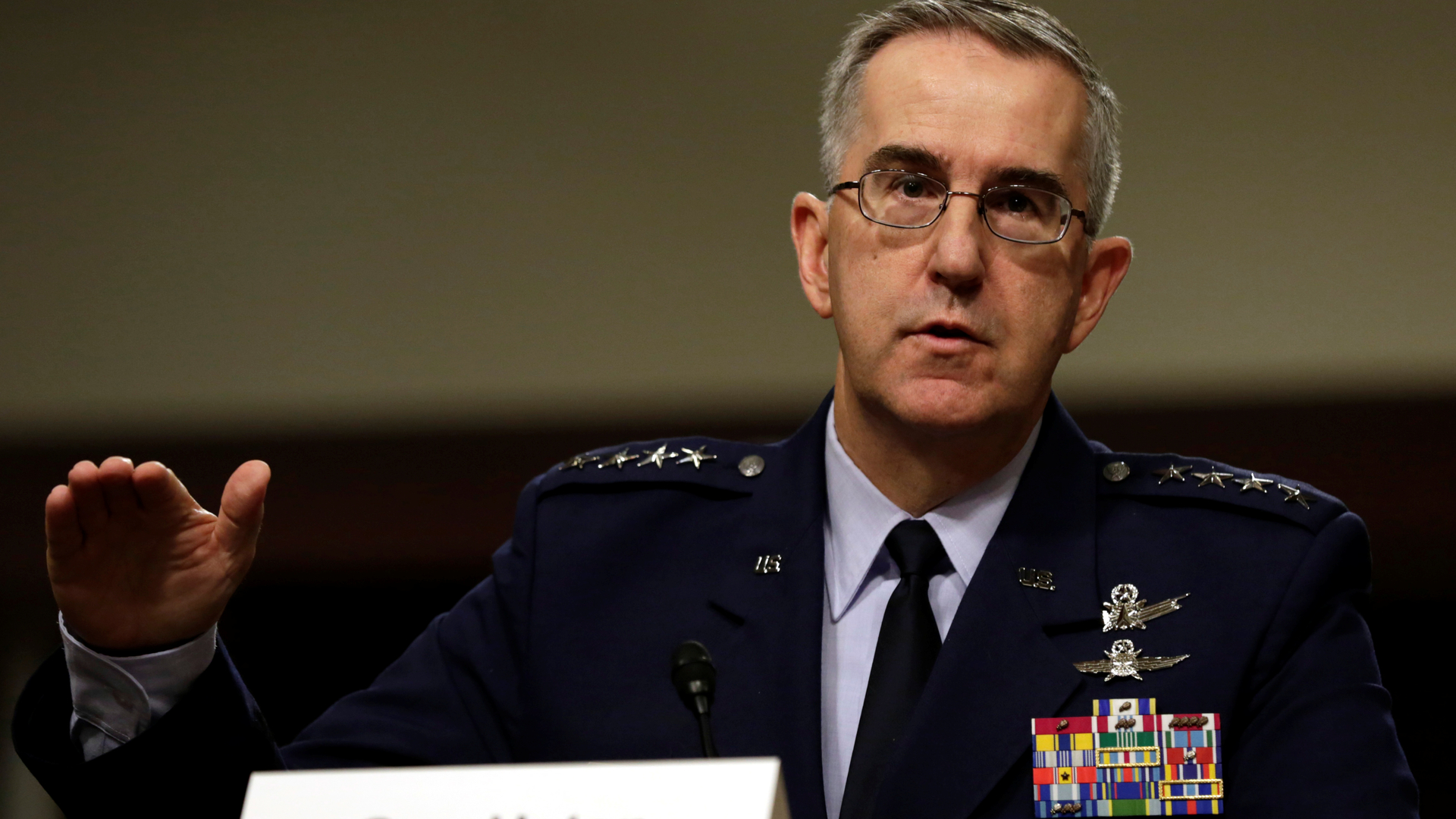 The United States, due to bureaucracy and fear of risks, is extremely slow to modernize its combat capabilities in the face of competition with Russia and China in the military sphere.

This was stated by the deputy head of the Joint Chiefs of Staff of the US Armed Forces, General John Hayten, speaking at a videoconference organized by the Brookings Institution in Washington.

“The problem is that we are still moving incredibly slowly,” the National Defense edition quotes Hayten as saying.

"Everything is bureaucratic and we avoid risks."

The military leader also stressed that if there are no potential opponents, then you can "eliminate all risks and move slowly," but if "there is a rapidly developing competitor like China and Russia, then we need to move more actively."

"And China builds almost so much per day."

The American military leader noted that the system in question will reach initial operational readiness no earlier than 2030, and full operational potential, possibly only after 2035.

He also stressed that China poses the greatest threat to the United States, however, he said, one should not discount the potential danger allegedly emanating from Russia, which has significant nuclear forces.

When asked how the Pentagon can accelerate the modernization process, Hayten replied that the department needs to make efforts to attract the private technology sector in order to benefit from its innovative solutions.

“The second point is to give people the opportunity to make decisions.

Oftentimes, those who manage programs and actually create something are deprived of such authority.

And to get any permission, they have to go all the way to the Pentagon.

When we moved fast, authority was transferred downward and people were able to take risks, fail, and work faster.

This allowed us to develop faster.

Therefore, we need to release the authority and again give people the opportunity to make risky but well-considered decisions, ”said Hayten.

According to experts, the United States is indeed very slowly improving its combat capabilities.

This is especially clearly seen, according to analysts, in the field of hypersound and the modernization of nuclear potential.

“These are the industries that Americans have the most problems with.

In them, they lag significantly behind Russia and China.

And now Hayten summarizes and states that, in general, the United States is only catching up with the Russian Federation and the PRC.

And since hypersonic weapons are a new global trend, it is important for the United States to go in this direction.

But Moscow holds the leading positions here, Beijing has also succeeded in many ways, "military expert Ivan Konovalov said in a conversation with RT.

In turn, Nikita Danyuk, deputy director of the RUDN Institute for Strategic Studies and Forecasts, a member of the Public Chamber of Russia, said that now the US nuclear shield is even incomparable in terms of level and potential with what the country had during the confrontation with the USSR.

"This lag in the modernization of the nuclear triad is not only due to the bureaucracy that Hayten is talking about, but also because of corruption in the American military-industrial complex," the analyst explained in an interview with RT.

However, the fact that it is in these areas that the Pentagon is having difficulties was admitted by the American military themselves.

In February, the same Hayten at a virtual symposium of the US Air Force Association stated that Moscow was already completing a program to improve its nuclear arsenal, and Washington was just beginning it.

In his opinion, this is a problem for the United States, so they should continue to invest in the nuclear triad and "closely monitor all the possibilities" of opponents.

He also said that the American side should have low-yield nuclear weapons that can be deployed on submarines to counter Russian armaments.

After that, the March report of the US Audit Office reported that the implementation of the program for the deployment of hypersonic weapons could be completed with a delay, since the United States to this day does not have the sufficiently developed technologies that are needed to create hypersonic weapons.

“Past experience has shown that programs that begin development before the full adoption of critical technologies is more likely to face problems such as increased costs or postponements, or do not achieve their goals at all,” the document said.

It also cited as an example the situation around the program for the development of the AGM-183A ARRW aeroballistic hypersonic cruise missile, all four planned flight tests of which were overdue. It was assumed that this will "further complicate the task of ensuring the performance of the rocket until the end of the 2022th fiscal year. As clarified, the delay was due to the fact that the program Tactical Boost Glide ("Tactical acceleration - planning"), "aimed at reducing risks and supplying scheduling technology for ARRW, was behind schedule by almost a year."

The document of the US Accounts Chamber also reported on problems in the implementation of the Long Range Hypersonic Weapon program ("Long-range hypersonic weapons").

As stated, “even the most optimized approach will not allow the goal of achieving limited working capacity by FY2023 to be achieved”.

Later in June, Undersecretary of Defense Mike White, senior director of hypersonic weapons programs at the Directorate of Defense, announced technological and engineering problems in the hypersound field, including "related to materials and heat."

According to him, it is also important for the American side to properly organize the "supply chain".

“We can make one copy of almost anything, but the point is to be able to put such a production on stream and at the same time ensure the reliability of the final product.

This is an area where we need to focus our efforts if we want to go beyond experimenting, ”White said during a videoconference hosted by the Washington-based Center for Strategic and International Studies (CSIS).

According to analysts, Haiten and other high-ranking US military officials do not voice the Pentagon's problems by chance - this is how they broadcast the position of the US arms lobby.

However, the allocation of huge funds to the Pentagon, which we observed earlier, still does not allow the United States to compete at a decent level with Russia and China in many military spheres, including hypersound and the nuclear triad, ”Nikita Danyuk believes.

Ivan Konovalov also believes that the statements of Hayten and other Pentagon representatives about the slow modernization of the United States' combat capabilities are connected, among other things, with the desire to increase the department's expenses.

“The struggle for the budget never stops there, and the military are always afraid that they will lose money, so they come up with horror stories in advance, primarily about the Russian Federation and the PRC.

There is a lobby for which it is important to create myths about Moscow and Beijing as opponents of the United States, so that against this background it would be easier to declare the need for additional investments in the military-industrial complex, ”the expert said.

At the same time, Konovalov, like Danyuk, believes that money on defense in the United States is spent extremely ineffectively, including due to the presence of a complex decision-making system.

The Pentagon has a huge number of protocols that must be followed.

Ultimately, this can affect the effectiveness of a project.

The sluggish bureaucratic machine of the American military department often makes it impossible to act promptly, ”he said.

Analysts agree that the United States will not be able to catch up with Russia and China in the field of hypersound and modernization of nuclear weapons.

“As Hayten himself said, the Pentagon has just begun to develop hypersonic weapons programs and modernize its nuclear triad.

The United States itself came to the conclusion that the lag in these industries is serious.

They need a powerful technological breakthrough, but with a system like the Pentagon, it shouldn't be expected in the foreseeable future.

Moreover, the United States now does not have the necessary technologies.

Washington will not be able to bridge the gap anytime soon.

And then Russia and China will go even further, ”concluded Konovalov.