Caregivers are mobilizing in France on the eve of compulsory vaccination

A few hundred caregivers refractory to vaccination demonstrated in large French cities, on the eve of the entry into force of the vaccination obligation. As of Wednesday, the ... 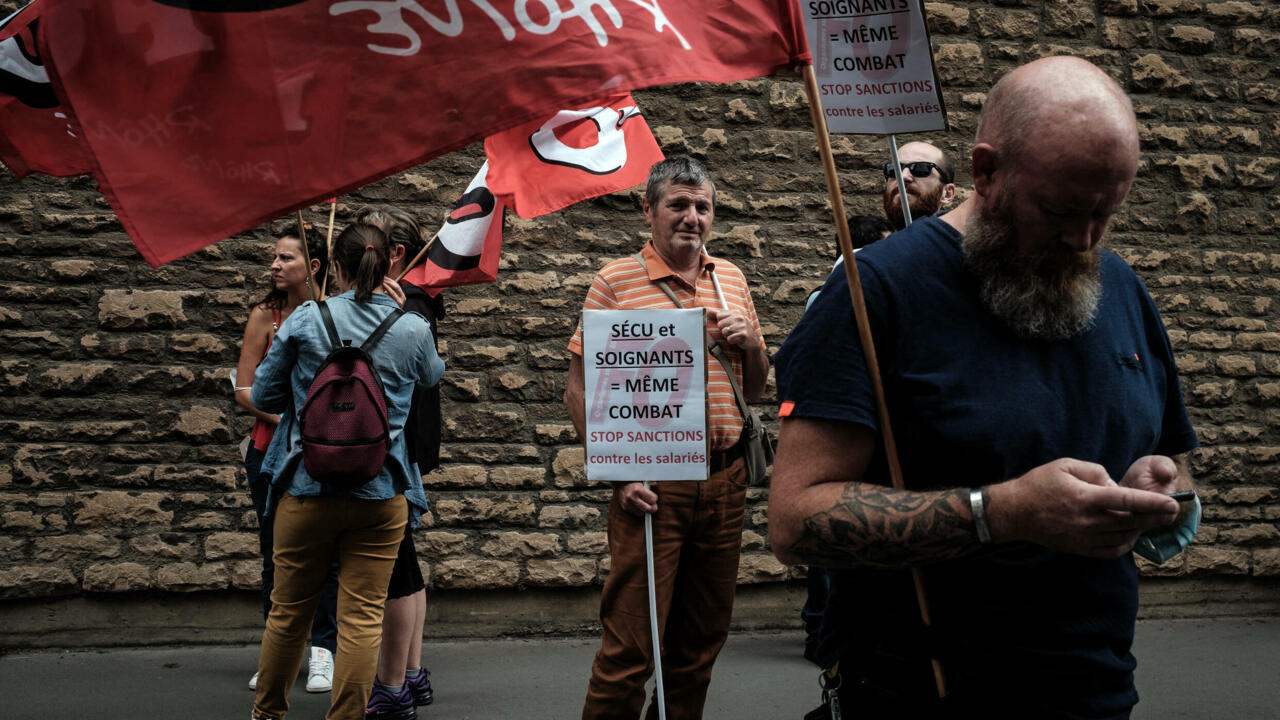 They did not take off.

Caregivers opposed to compulsory vaccination once again expressed their position, Tuesday, September 14, while the vaccine obligation against Covid-19 comes into force on Wednesday.

They were about 200 in front of the Ministry of Health in Paris, noted an AFP journalist, an official of the CGT-Health estimating their number rather "between 300 and 400".

There were 200 demonstrators in front of the Regional Health Agency (ARS) of Occitanie in Toulouse and that of Auvergne-Rhône-Alpes in Lyon, 80 in Orléans and several dozen in front of the Rennes University Hospital.

In Paris, the participants came "to express a rather intense anger against this authoritarian injunction" which will "generate tension and chaos", affirmed the secretary general of the CGT-Santé, Mireille Stivala.

"We can no longer allow ourselves to lose caregivers", she added, fearing "bed closures" and "degraded care for the population".

As of Wednesday, employees of hospitals and nursing homes (as well as firefighters, paramedics and home helpers) may be suspended, without pay, if they have not received at least one dose of vaccine against Covid-19 .

Today in Céret, the #caregivers say no to compulsory vaccination which comes into force tomorrow.

The media do not talk about it but we are starting to get used to it ...

"This vaccine worries me too much"

Amel Benothman, 41, nurse at the public mental health establishment of Saint-André, in the Lille metropolis, demonstrated last Saturday in a white coat: "I will find myself without pay, with three children. This vaccine worries me. too much, I would like my choice to be respected. I have already had the Covid, not serious, and I think the risk-benefit ratio is too important. I am an excellent nurse, I think it is the thing that I do the best in my life and today, I am deprived of my job (...) We are shot at work every day, we are psychologically and physically over-solicited, and today harassed in relation to vaccination ... it's too much, we are being pushed to resign. "

"I refuse to play Russian roulette with my health"

Nathalie Della Giustina also demonstrated on Saturday by waving a yellow sign: "I will soon no longer be able to work ... But I will always remain standing and free". This 47-year-old psychologist working in an association in the Auvergne-Rhône-Alpes region refuses to be vaccinated because she has had bad experiences with vaccines. "My manager warned me that Wednesday I will no longer be able to work. We will first settle the days of leave and afterwards, there will be suspension of the employment contract. But he told me that in two months, it would be the dismissal or conventional termination. We are thrown like dogs, it's undemocratic. I refuse to play Russian roulette with my health and today, I choose my health even though I love my job. "

"We are a grain of sand"

Tatiana Leclerc is a life support worker in Lille: "It is very unfair, because at the start of the crisis, we were not even considered as priority employees, we had no mask, no protection, and today Hui we are put in the lot of caregivers! For me, it is suspension of contract, I will not be vaccinated. My husband is a truck driver, he has no vaccination obligation, nor need a pass to enter the restaurants Why? Because they are afraid that the truckers will block everything. But we are a grain of sand. When we go on strike, they do not care. "

"For now, I am resisting"

Lauriane Cott, 42, is a liberal physiotherapist in Mérignac (Gironde): "For the moment, I am resisting but I have already received an email and a threatening letter from the ARS", the regional health agency .

"I have charges, pensions, rent, insurance to pay each month so unfortunately I will be faced with a financial problem. But September 15, that's not where I will give up, it would be too easy, so we will hold on as long as we can ", she assures, refusing to be vaccinated with" a vaccine which has a temporary authorization and for which we have only six months of follow-up ".

"Adulated yesterday, today they spit in our mouths"

Marianne, a 48-year-old liberal nurse in Bordeaux, plague: "Adulated yesterday, today they spit in our mouths".

"Vaccination is offered as the only cure, but if we were at war, we would have really used all the weapons", such as "boosting the immune system" and "better taking care of people with comorbidities", she argues.

As the fateful date of September 15 approaches, "we are in permanent stress" but "we will try to resist as long as possible".