China News Service, Fuzhou, September 13 (Reporter Long Min) How to effectively stop the spread of the epidemic? Will the epidemic spillover? How to strengthen school epidemic prevention? Facing the "extra-long incubation period", how to protect yourself? ...In the past few days, the local epidemic in Fujian has aroused widespread concern. On September 13, residents of Xianyou County, Putian Ci 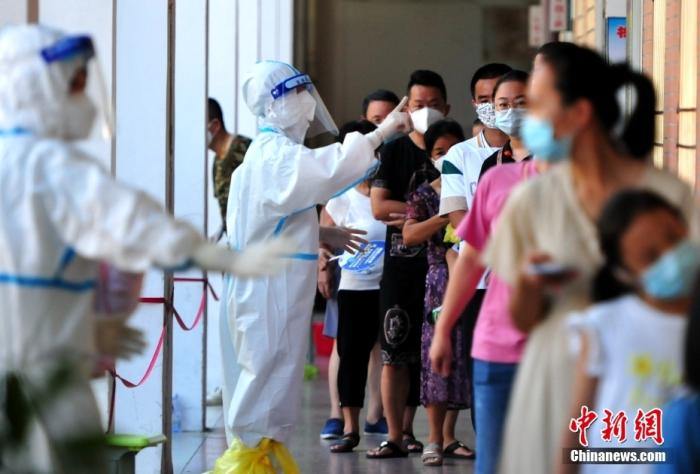 Will the epidemic spillover?

How to strengthen school epidemic prevention?

Facing the "extra-long incubation period", how to protect yourself?

...In the past few days, the local epidemic in Fujian has aroused widespread concern.

On the same day, Xianyou County carried out nucleic acid testing for all employees throughout the county.

Following the emergence of imported cases in Putian’s high-risk areas in Quanzhou, the Xiamen Municipal Health Commission notified on the 13th that on September 12, the Tong’an District of Xiamen City passed the screening of people coming to Xiamen from high-risk areas such as Fengting Town, Xianyou County, Putian City. In the investigation, it was found that Wu XX, a person who came to Xiamen, tested positive for the new coronavirus nucleic acid.

After verification, Wu Moumou was a close contact of the reported case Wang Moumou in Putian City.

Since September 10, Fujian Province has reported a total of 43 local confirmed cases, and 43 hospitalized cases (1 in Xiamen, 7 in Quanzhou, and 35 in Putian). There are no deaths; there are still asymptomatic local infections. Thirty-two cases were under centralized isolation medical observation (32 cases in Putian City).

Experts from the National Health Commission to Fujian work group judged: The current situation in Putian is severe and complex, and there is a high possibility that cases will continue to be found in communities, schools, factories and other populations, and there is a risk of spillover of the epidemic.

According to the delineated scope of the medium and high risk zone, Putian City has done its best to do various prevention and control work and resolutely prevent the outflow of personnel.

At present, Putian implements traffic control over the city’s 20 high-speed entrances and exits, 9 national provinces, county and township roads, and inter-city entrances and exits; 12 expressway intersections are subject to closed management (no entry and no exit), and 8 are subject to inspection and traffic management; strictly restrict personnel Gathering; suspension of operations in related indoor public places such as chess and card rooms, theaters, Internet cafes, billiards halls, karaoke halls, bars, museums, libraries, fitness venues, training institutions, etc.; in principle, people in Pu do not leave the city unless necessary, if due to If you really need to go in and out for medical treatment, specific official duties, etc., you must hold a certificate of negative nucleic acid test within 48 hours.

Yin Li, secretary of the Fujian Provincial Party Committee, said that it is necessary to work together to do a good job in external defense export and internal non-proliferation work, and resolutely curb the spread of the epidemic.

From August 26 to September 10, preliminary calculations of the number of people leaving the province from Putian were about 30,000. After the outbreak, a letter of assistance was issued to all provinces, and investigations were carried out immediately across the country.

According to incomplete statistics, Chengdu, Meishan in Sichuan, Zhuhai in Guangdong, Foshan, Huizhou and other places have successively issued emergency reminders. Recently, personnel from Xianyou County of Putian City should take the initiative to report and obey the arrangements for epidemic prevention and control measures in their jurisdictions.

The epidemic was first discovered in schools, and lower-age children had more infections.

Ling Longmei, director of the Putian Center for Disease Control and Prevention, said that the local area will routinely carry out a 10% nucleic acid sampling test every half month for students in school after the beginning of school.

Subsequently, the 20 students involved were subjected to apheresis testing. At 7 o'clock on September 10, the test found that two students from the school were brothers. The test results were positive, which was the first positive case of the epidemic.

What is even more worrying is that on the morning of the 13th, the Information Office of the People's Government of Quanzhou City held a press conference to report that as of 24:00 on September 12, Quanzhou City had confirmed 6 confirmed cases.

Among them, Case 7, male, 10 years old, is a student of a primary school in Quanzhou, the son of a confirmed case reported in Putian City, and the nucleic acid test result was positive on September 12.

According to incomplete statistics, among the reported positive cases in Fujian, 19 cases were 3 to 12 years old.

How to strengthen school epidemic prevention has become a focus of attention from all walks of life.

In Putian, offline teaching in the city’s primary and secondary schools (except for senior thirds with accommodation and fully enclosed management conditions), kindergartens and various education and training institutions will be suspended from September 13 to online teaching.

Many schools, including Sanming College and Zhangzhou City Vocational College, have requested that teachers, students and staff who are still in Putian City be deferred from returning to school.

The Fujian Provincial Department of Education and the Fujian Provincial Health Commission require that, in principle, all schools at all levels and types of schools in the province organize all teachers, students and employees to complete a new round of nucleic acid testing before September 19.

The Mid-Autumn Festival and National Day holidays are coming soon, and many people originally planned to travel.

However, in the face of the resurgence of the epidemic, does the "Double Festival" stay in place or go out?

Some people sigh, so it seems that they are going to run the soup.

At present, it is not yet known how large the epidemic will be in the future.

But a fact that cannot be ignored is that epidemic prevention cannot be relaxed.

On September 7, Wang Huaqing, chief expert on the immunization program of the China Centers for Disease Control and Prevention, said at a press conference held by the Joint Prevention and Control Mechanism of the State Council to remind the public that they must still tighten the string of epidemic prevention and control during travel and maintain a certain degree of vigilance. ; As for gatherings and gatherings, it is not recommended, especially large-scale gatherings are not allowed.

It is very important to take personal protection during travel, including wearing masks, washing hands frequently, maintaining hand hygiene, maintaining social distance, not getting together, and not gathering.