A celebration like those of a lifetime. No bouncy castles, no entertainers, no clowns, no similar inventions. This is how the First Communion of Bianca, the daughter ... 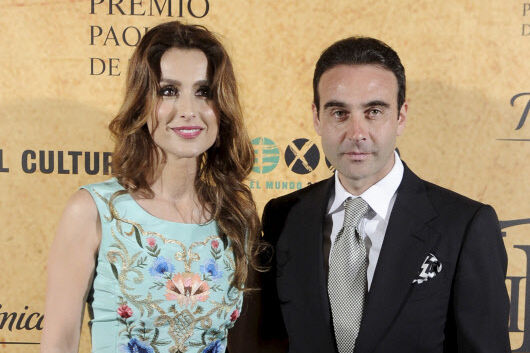 No bouncy castles, no entertainers, no clowns, no similar inventions.

This is how the

the youngest daughter of Paloma Cuevas and Enrique Ponce, took place this weekend at the

, the family property that is already for sale.

had been aroused with what some considered the reunion of the already ex-marriage.

Nothing could be further from the truth, since Paloma and Enrique are seen regularly every time the right-hander goes to pick up his daughters, apparently both maintaining a cordial relationship.

Slightly less than a hundred people gathered for this special moment, taking into account the restrictions due to the pandemic, something that in turn led to a celebration aimed at children.

Bianca was accompanied by many of her friends from school

, who came accompanied by their parents. They all behaved normally; There were no indications to restrict the use of mobile phones and even so the guests forgot their

and dedicated themselves to enjoying the party, which was what it had to be: celebrating that Bianca received for the first time the sacrament of Communion with a later party for a girl.

On his part, some cousins ​​and his brother, among others.

It was not Ana Soria

, the young woman with whom the right-hander maintains a well-known and widespread relationship;

Perhaps they have found the sense that they forgot, for example, on top of an inflatable crocodile.

the right-hander's mother broke an arm

and was operated on in Valencia.

Despite the fact that Paloma had put all her love and determination that they did attend, since they are her in-laws and her daughter's grandparents.

On the side of Paloma, her sister Verónica and her parents, Victoriano Valencia and Paloma Díaz

They say about him that when his granddaughters are close to him, he crashes.

But it was a moment, perhaps the last, in which he could be surrounded by all his own.

His daughters, his granddaughters and his son-in-law.

Everyone was very aware of Victoriano

at all times, very smiling throughout the celebration and excited to see his granddaughter so happy, a very happy girl.

and their children - the eldest, Eugenia, is a close friend of Ponce and Cuevas' daughters.

Paloma and Enrique have a good relationship

all for the children.

During the religious ceremony, they sat together

Parents united by the happiness of their daughters.

And Ponce, calm, happy, without avoiding situations, attending to all the guests, talking and doing his best to be with everyone, also with his ex-wife's family.

It was the Communion of a girl, not Bianca Ponce.

designed by Paloma together with Rosa Clará

, in white, made of plumetti tulle with simple lace, topped by a medal of the Virgin.

Her hair was tied back in a wide braid with a floral ornament.

Paloma chose a dress from her own collection in turquoise and with a midi cut, below the knee.

To decorate the altar, white flowers and a walking cape embroidered with the Virgin of Guadalupe and the Immaculate Conception, and with the

image of the Fallen Jesus

, of whom the family is very devoted, to preside over the moment.

After the ceremony, which began at around seven thirty in the afternoon, a pre-dinner cocktail took place - this was done to avoid the hot hours in the field of Jaén.

After the aperitifs, the guests were distributed in round tables, all the same, without there being a main table.

outdoors, which included a light starter, a second fish, and dessert.

There was also a cake, because Communion coincided with Paloma Cuevas' birthday.

Happy birthday was sung to her, she was congratulated and little else.

Because Paloma did not want to deprive her daughter of prominence.

A party that lasted beyond one in the morning, which was when Enrique Ponce started singing accompanied by the group hired to liven up the evening.

As for the gifts that Bianca received, they have not transpired at the moment, since some arrived in advance, and others, those received the same day, were being left on a table.

Bianca would open them later with greater tranquility and time to thank her guests for so much detail, because at those times she was dedicated to being with her friends and enjoying their big day.

Paloma and her daughters have already returned to Madrid,

the girls have already started classes at school

And in the meantime, she is preparing the presentation of her first collection as a designer with Rosa Clára, which could take place next December.

Since Enrique Ponce and Paloma Cuevas signed the divorce, they have put personal issues aside;

life goes on and on.

The intention is not to continue encouraging comments and publications about their separation, as Paloma has done since the right-hander's relationship with Ana Soria came to light.

Better to put out fires than to generate them.

And it seems that they are getting it.

Families Cuevas and Ponce: uncomfortable posed after the divorce and the numerazo with Ana Soria

Astray Royals The beach where Margarita held the horns

The Yotuel Romero Thermometer: "Freedom in Cuba would be better than an orgasm"