Ex-Minister from maternity leave to chair the Committee on Economic Affairs: "Admittedly, I wonder a little bit what this will be like"

Grahn-Laasonen admits that responsibilities will continue to be of interest. Member of Parliament Sanni Grahn-Laasonen (Coalition Party) is the new chairman of the Parliamentary Finance Committee. Ex-Minister Grahn-Laasone, 38, has not heard anything for a long time, and the reason is natural. Grahn-Laasone became a mother for the second time in early December, and she returned from work on maternity leave now at the beginning of the autumn parliamentary term. "Today, th 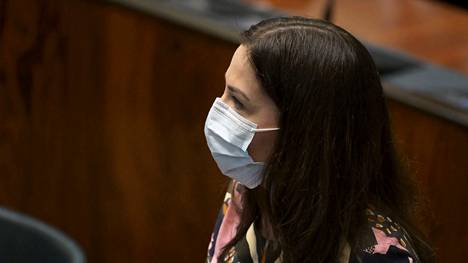 Member of Parliament Sanni Grahn-Laasonen (Coalition Party) is the new chairman of the Parliamentary Finance Committee.

Ex-Minister Grahn-Laasone, 38, has not heard anything for a long time, and the reason is natural.

Grahn-Laasone became a mother for the second time in early December, and she returned from work on maternity leave now at the beginning of the autumn parliamentary term.

"Today, there has been a baby boom in Parliament, which is a bright thing and would signal that demanding work and family can be combined," says Grahn-Laasonen.

- Admittedly, I wonder a little bit what this will be like.

In August, the first three weeks of otitis and gout, and I wonder what will come this fall.

That's how strangely everyday life goes smoothly and we're on the side of victory, he continues.

The chairmanship of the Finance Committee belongs to the Coalition Party during this parliamentary term.

The place was opened when Juhana Vartiainen (Coalition Party) became the mayor of Helsinki and the Coalition Party seated Grahn-Laasonen.

The Committee on Economic Affairs will not be the first to think of Grahn-Laasone.

Grahn-Laasonen has been a Member of Parliament for ten years.

Last week, he opened the door of the Finance Committee room for the first time and immediately got his hands on the chairman's gavel.

I have tried to learn new things in the roles and go towards the new.

Surprisingly, there are similarities with my previous work, Grahn-Laasonen says.

Grahn-Laasonen was the Minister of Education of the last election in Juha Sipilä's (central) government and he had less than a year as Minister of the Environment in Alexander Stubb's (Coalition) government.

- Energy issues and emission reduction issues are close to the term of the Minister of the Environment.

The first major entity in committee is the EU climate package, and I have been negotiating climate agreements at climate meetings.

- The interface with the duties of the Minister of Education is the innovation system and research funding.

The theme of sustainable growth has followed my work throughout my career, Grahn-Laasonen says.

The Finance Committee deals roughly with matters belonging to the Ministry of Employment and the Economy and from the administrative branch of the Ministry of Finance with financial market matters.

This year, the committee has drawn up reports on, among other things, the Electricity Market Act, the promotion of biofuels, the Competition Act or the Emissions Trading Act.

During the Corona period, the committee has included, for example, cost subsidies and restaurant closures.

- We have more than 50 meetings in the fall, practically four days a week.

There are so many things, especially EU issues, Grahn-Laasonen says.

Grahn-Laasonen was the Deputy Chairman of the Coalition Party in 2014–2020.

The Coalition Party has an unwritten rule that the vice-chairman can be for three terms, six years, ie Grahn-Laasonen's time in the party leadership came to an end a year ago at the Pori party meeting.

When the Greens left the government seven years ago in September 2014, Prime Minister Alexander Stubb nominated Grahn-Laasonen as Minister of the Environment.

The Coalition Party is in opposition this term.

Grahn-Laasonen has now taken over the chairmanship of the Parliament's Finance Committee, and he admits that positions of responsibility will continue to be of interest.

- I had the opportunity to be three vice presidents of the party, and I have now been on maternity leave.

It is now a good and charged feeling to be back to work and a new one.

Responsibilities have always been of interest in working life, and the tasks that happen are handled well.

- The purpose of the 2023 parliamentary elections is to be a candidate.

The Coalition Party, as the Prime Minister's party, aims to reverse Finland's direction.

The left-wing government, where the center is the guarantee party, is driving Finland on a path of inconsolable indebtedness, which lacks structural reforms and growth depends on the business cycle, Grahn-Laasonen says.

Grahn-Laasonen lives in both Forssa and Helsinki, and the family's daily life with a child aged 8 and under is in Helsinki.