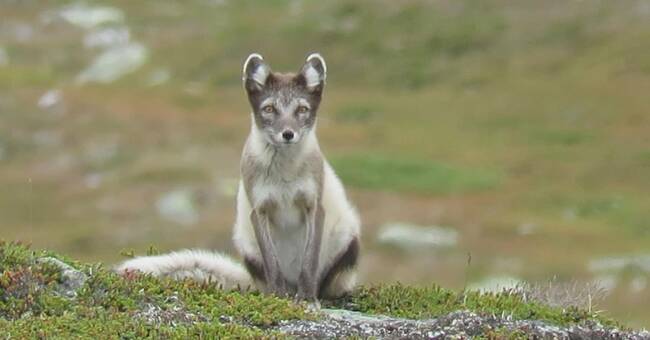 This year, 17 mountain fox litters have seen the light of day in the Västerbotten mountains, which is more than the year before when only six pairs of mountain foxes had young.

- We have not really completed the inventory so there may be another litter this year, says Sonja Almroth nature conservationist at the County Administrative Board.

The number of lemmings usually varies in a four-year cycle with so-called peak years and bottom years, as the lemmings often suffer from food shortages.

2019 was a peak year and then as many as 27 mountain fox litters were born in the county.

2020 was a bottom year and during the bottom years no mountain foxes are usually born, but with the help of support feeding, six mountain fox pairs still managed to have young.

Scabies was discovered thanks to increased tourism

This spring, mountain foxes in Stekenjokk were affected by fox scabies.

The infection came from red foxes that migrated up into the mountain area.

The county administrative boards in both Jämtland and Västerbotten began to medicate the affected foxes and this has yielded results.

- During the summer, we have not seen any new cases of fox scabies.

Pictures from game cameras show that the mountain foxes are healthy, so the medication seems to have succeeded this time, says Sonja Almroth nature conservationist at the County Administrative Board

According to Almroth, a case of scabies was discovered after tourists tipped off the County Administrative Boards.

- Thanks to the increased tourism, we got more eyes on the roads and if you see something, you are welcome to tip us, she says.

Baby happiness throughout the country

The happiness of the baby was also great in the rest of the country. The preliminary figures show that as many as 60 mountain fox litters were born this year. In Norway, 46 litters have been noted.

- It's great fun. We all who work with this are very happy when it is so. The dream scenario is to have a litter in every mountain fox nest we know of, but that is not likely in the next few years, says Sonja Almroth.