The UAE surpasses the global average of organ donors

The head of the National Committee for Organ and Tissue Donation and Transplantation in the country, Dr. Ali Al-Obaidli, stated that the UAE exceeded the global average of donated organs from each donor after death, reaching 3.9 compared to 3.5 members globally, stressing that 169 people benefited from transplants. 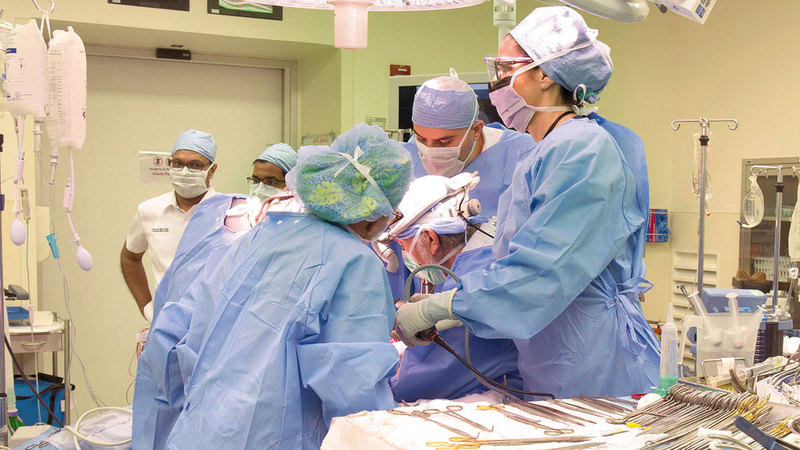 169 people benefited from organ transplants in the country

The UAE surpasses the global average of organ donors

The UAE is a pioneer in multi-organ transplantation.

The head of the National Committee for Organ and Tissue Donation and Transplantation in the country, Dr. Ali Al-Obaidli, stated that the UAE has exceeded the global average of donated organs from each donor after death, reaching 3.9 compared to 3.5 members globally, stressing that 169 people have benefited from organ transplants in the country since The issuance of the organ transplant law began in 2016, stressing that the committee seeks to organize initiatives to increase the number of donors in the country during the coming period.

Al-Obaidli explained to "Emirates Today" that the most organs that were transplanted in the country were the kidneys, with 78 kidneys.

It is noteworthy that more than 4000 people in the country suffer from organic failure in kidney function, and dialysis centers recorded visits at an average of 144 visits annually for each patient suffering from kidney failure. According to Al-Obaidli, the patient has to sit three times a week, for up to four hours On the dialysis machine, dialysis drains patients 576 hours of time each year, and a kidney transplant provides an alternative in terms of quality of life and reduces the financial burden on patients and the government.

Al-Obaidli stated that 10 different nationalities took the lead in organ donation after brain death to save the lives of others, as 129 of the donated organs were transplanted in the UAE, and 40 organs were transplanted in Saudi Arabia, where about 19 nationalities benefited from them, noting that 28 children (16 males) 12 females) and 141 adults (95 males and 46 females) benefited from kidney, liver, lung, heart and pancreas transplants.

Al-Obaidli stressed that the UAE is a pioneer in multi-organ transplantation, as it is only available in the Arab countries in two countries, the UAE and Saudi Arabia, which encourages a culture of organ donation, and has also worked to build competencies in this specialty, highlighting and highlighting achievements in the health sector, especially in Donation and organ transplantation, which was positively reflected on the performance of health institutions in the country, as the UAE exceeded the global average of donated organs for each donor after death, as the rate in the UAE reached 3.9 members in 2020, while the global average is 3.5, pointing to Recently, many medical achievements have been achieved in the country, including heart transplantation, lung transplantation, liver transplantation from related donors and post-mortem donors, as well as the expansion of kidney transplantation, including children and adults.

And on how the UAE topped the list of the best country in the Middle East in the field of organ transplantation and transplantation, he stressed the need to invest in modern and innovative technologies that enable the transfer of organs over long distances, and thus expand partnership-building and cooperation in the field of organ transplant exchange between the programs that were licensed in The recent period, and cooperation between countries, even distant ones, in the exchange of organs and reciprocal donation for kidney transplantation, to increase the chances of obtaining identical kidneys, in coordination with the Insurance Authority and insurance companies, to discuss the requirements for covering the costs of donation and organ transplantation, as well as providing and developing the necessary technical cadres in the intensive care departments at the emirate level. By 2021 to encourage donation, and cooperate with the best specialized centers in the global field to develop scientific and educational foundations.

The head of the National Committee for Organ and Tissue Donation and Transplantation in the country, Dr. Ali Al-Obaidli, drew attention to developing plans to encourage community members to register in the "Hayat" program, most notably holding several community awareness campaigns to spread the culture of donation, and social media to reach the largest community segment, and the success of Workshops and community events related to the National Program for Organ and Tissue Donation and Transplantation, and the development of sports programs to improve the sports aspects of both donors and patients receiving organs, similar to other countries, and support activities in support of hosting the World Games in the category of donors and organ transplantation.

The UAE has worked to build competencies in the field of donation and organ transplantation.