At first there was only a gray dot on the window - it was death: now speaks Stanley, who survived when the plane hit directly

Stanley Praimnath is reportedly the only one to survive the hit when terrorists piloted planes into the towers of the World Trade Center. 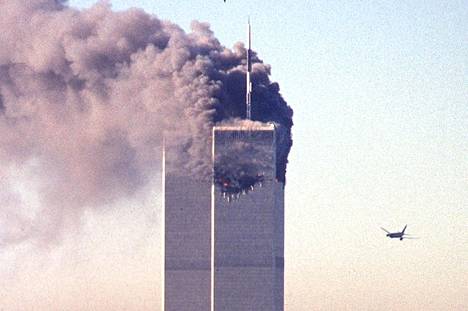 An estimated 12,000 people were rescued from the twin towers of the World Trade Center in New York on 9 September 2001 by terrorists.

Stanley Praimnath did it twice.

He had already left the south tower for evacuation, but returned to work.

He is believed to be the only survivor at the point of impact of the second passenger plane.

After this, he still escaped along the only lifeline of the tower, the intact stairs, past and down the destruction.

Another passenger plane approached the WTC's south tower on September 11, 2001.

Praimnath’s day at work at the WTC’s south tower began at 8:45 a.m. when he jumped up the elevator.

Praimnath was blissfully ignorant of the events.

He held management positions at Fuji Bank, whose office was located on the 81st floor of the South Tower.

In the adjoining tower, just over ten floors above, a huge inferno roared, and soon Praimnath also saw fireballs falling from the tops of the northern tower towards the ground.

"Let's get out of here now," Praimnath told the secretary.

- I stepped out of the elevator downstairs, and the guard asked me where I was going.

I replied that home.

He said the building is safe and I can return to my office.

At the same time, there was also an Announcement from Central Radio: your office is safe and guarded.

Come back to your seats.

Read more: Patricia only had time to say “oh god” on the phone - a ruthless death line divided the WTC’s north tower at 8.46

Praimnath thought for a moment what to do.

He then hurried the secretary who was with him to leave - and took the express elevator back to his office.

He has later stated that he certainly would not have returned if he had known that an airplane had collided with the north tower.

There were other returning colleagues in the elevator.

In the office, the phone rings.

A colleague from Chicago called.

This had been watching television.

Praimnath assured that everything is fine.

- I stood at my desk in front of the window and held the phone in my hand when something caught my attention.

It was small at first, gray in color, but every second it grew bigger and bigger.

The plane stared at me, came towards.

The machine began to tilt.

I just remember saying, Lord, I can't do this, take the lead.

I dived under my desk and it has everything I remember.

The second wing of the plane also smashed the roof and partitions in Fuji Bank's office.

The explosion was dizzying.

- The only object that remained intact in the office was my desk, under which I would hide.

It must have been because I had my Bible on the table, Praimnath believes.

Praimnath had moved from Guyana in 1981 as a migrant to the United States.

His family was religious, but he himself had rebelled against him.

Later, however, she had begun to worship again, married the pastor’s daughter, and was involved in founding a church in the Queen of New York.

Now Praimnath had to witness how the co-workers who had returned to the office in the same elevator had died, but he clumsy came alive from under the table in the midst of destruction.

Flight UA 175 had hit between the 75th and 82nd floors of the South Tower.

According to Praimnath, part of the wing of the plane was stuck in a doorway less than ten meters away from him.

It was as if someone had emptied a huge sack of concrete powder into the floor.

The fire roared further away.

A United Airlines plane exploded in the south tower.

Part of the roof had collapsed, and hanging electrical wires hung from the sprinklers' extinguishing water.

Praimnath set off crawling towards the other side of the office, fearing he would get the rest off the roof.

That someone was Brian Clark.

The deputy director of Euro Brokers, who worked on the 84th floor, was descending the stairs and just encountered people on the 81st floor who came up.

The group discussed on the stairwell which direction would be right.

Others wanted to stay away from smoke and fire, Clark preferred to try to get out of the building.

- Suddenly I heard a bang and a suffocated cry.

I went from the door to the 81st floor, it was dark and black smoke was hovering in the air in the light of my flashlight.

The sound I heard came from somewhere less than ten feet away, Clark said.

Between Praimnath and Clark there had been a broken plasterboard wall at the top.

- One unworthy wall stood in front of me, Praimnath remembers.

- The flashlight man told me to climb over it, and he would receive it on the other side.

I was hammered, bruised and bloody.

The man went to stand on the table and grabbed a neckline from me.

I meandered, he pulled, and flew to the other side.

Before I realized where I was, I lay on top of him.

I hugged him and stabbed him in the forehead, Praimnath recalled.

Brian Clark had accidentally made a choice on the 84th floor that turned out to be a real life lottery win.

He had gone down the stairway A.

It was the only one of the three staircases to remain navigable.

The plane had hit the tower a little diagonally, and the farthest staircase had remained intact also because it was protected by a large elevator machine.

However, Staircase A did not become a common way of salvation for those still at the top of the tower, for in chaos the message did not flow and its existence was not known.

That is why hundreds of people died.

Only 18 people have been counted escaped along the stairs.

Praimnath and Clark made their way down the stairs for a long time.

When they reached the street, there is chaos ahead.

Scrap fell into the street, and the men left at the urging of the firefighters to run.

As they looked back for a moment, the top of the tower nodded.

I looked at Brian and said: it will collapse.

The south tower collapsed less than an hour after being hit.

Since their salvation, the men have been like brothers and have supported each other.

Praimnath lost 23 co-workers, Clark 61. Praimnath has said he has subsequently experienced guilt for his own salvation.

He saw guidance in his salvation and became a preacher.

On each anniversary of the attack, he performs in church, telling about what he experienced, especially his belief that God had his fingers at play in his story.

- God already kept his share of the covenant and saved me.

Now it’s my turn to keep my part of the deal.