Covid and recovery, at the start of the Eurogroup. Gentiloni: "Building consensus on tax reform"

In view of the Ecofin in the afternoon, eight finance ministers of 'frugal' countries said they were opposed to the idea of ​​loosening the rules on deficits and public debt&nbsp; 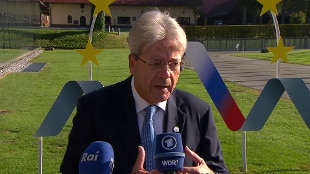 September 10, 2021 "We start with a certain degree of optimism and it is important to discuss among ministers how to better coordinate the phase ahead. This is the right time, recovery is coming to the member states. This was stated by the EU commissioner for the economy , Paolo Gentiloni, joining the Eurogroup. "We are not just looking for recovery but sustainable growth, this means that we must continue to support fiscal policies and open the debate on the future of governance in order to have this sustainable growth", he explained .

"The work of the Commission is to build consensus and we will try to do so respecting the opinion of all but with the aim of making our rules suitable for lasting and sustainable development," he continued. For Gentiloni it is "a positive fact that some countries have already started the comparison". The reference is to the eight frugal who wrote a letter to the Commission in which they ask to respect the common goal of reducing the debt.

The Eurogroup is underway. In Brdo in Slovenia, finance ministers from the 19 euro area countries are meeting to discuss the economic situation and how to manage the uneven impact of Covid-19 in the euro area. Ministers will also examine corporate solvency and ability to adjust in the recovery period and will be briefed by the ECB on the latest steps relating to the digital euro project.

In particular, the director of the European Center for Disease Control (ECDC), Andrea Ammon, will update the Eurogroup on the epidemiological situation of Covid-19 given its importance for economic developments in the current situation. This will be followed by a debate on the economic situation and an exchange of views with the chairman of the European Parliament's Economic and Monetary Affairs Committee, Irene Tinagli. The Eurogroup will discuss the lessons learned from the uneven impact of Covid-19 in economic sectors and regions. Ministers will focus on the medium-term implications of the pandemic in terms of the policy actions needed to avoid divergences. The discussion will be supported by a note prepared by the European Commission which examines the issue of convergence in the euro area.

Ministers will discuss the solvency situation of the corporate sector and potential measures to facilitate corporate restructuring and economic adjustment in the euro area in the post-Covid recovery period. They agreed in previous meetings to monitor the solvency and restructuring needs of the corporate sector to support the recovery. The European Central Bank will inform the Eurogroup on the decision of the Governing Council of the ECB in July 2021 to start the investigation phase of the digital euro project.

"It is not the subject of today's meeting (Eurogroup and Ecofin) but the European Commission intends to resume public consultation on the future of EU tax rules and some defects were already identified before the crisis and are now even more pronounced". This was stated by the vice president of the European Commission, Valdis Dombrovskis, upon his arrival at the Eurogroup meeting in Kranj in Slovenia. "We need realistic debt relief for all Member States, we will need to balance our fiscal sustainability with the need to support the economic recovery," he explained. Valdis insisted on the "need to build a consensus on tax reforms".

Le Maire: "We have to invest and we need the money to do it"

"There is a need for investments in Europe, very large investments. For two reasons: the first is the battle against climate change, which will be expensive and will require a lot of new investments; we need money for the climate, we need the money to fighting climate change, we need money to access the technologies that will allow us to be the continent with the most success in reducing CO2 emissions. But we must be clear: we will need money ". This was stated by the French Minister of Economy, Bruno Le Maire, upon his arrival at the meeting.

Eight frugal countries, no changes to the stability pact

Meanwhile, the confrontation of the EU countries on the reform of fiscal policies is starting to rise. In a letter, addressed to Ecofin, eight finance ministers of 'frugal' countries said they were opposed to the idea of ​​loosening the rules on deficits and public debt while opening up to a possible review of the methods of application but "the treaties do not modify ". The initiative is led - once again - by Austria and has so far found support from Denmark, Latvia, Slovakia, the Czech Republic, Finland, the Netherlands and Sweden. "The reduction of the debt / GDP ratio must remain a common goal",

"We are open to the debate on the improvement of economic and fiscal governance", the letter reads, but only as regards "simplifications and adaptations that favor a coherent, transparent and better application, as well as the application of the rules". In other words, "the deactivation of the General Safeguard Clause and a possible reform of the Stability and Growth Pact should not be linked", argue the frugal. "Discussions on improving the current economic governance framework are time-consuming and should be based on extensive consultations by the Commission; quality is more important than speed," argue ministers. Ecofin will meet in Slovenia in the afternoon, after the Eurogroup meeting.