14-year-old Linnea Brattgrå from Svenstavik is doing her first season as a drag racing driver on a motorcycle and you can safely say that she got off to a flying start. She came second in the Swedish Championships and leads the European Drag Racing Series (EDRS) for juniors with only one competition weekend left. 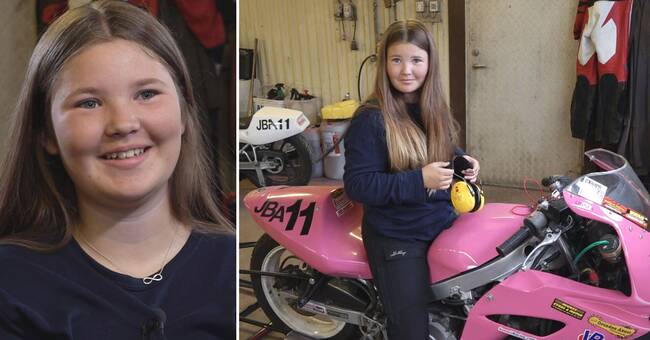 In a workshop in Svenstavik is the pink-purple motorcycle that Linnea, together with her father, rebuilt so that it can ride drag racing.

Linnea has previously competed in snowmobile cross, but last year she decided to change to drag racing and obtained a competition license.

And even though it is about 200 km for Linnea to Sundsvall Raceway, which is the nearest track where you can train and compete, she has made a really brilliant first season and she leads the Junior Bike class in EDRS big.

- I did not even think that there were SM or EDRS cups, I just thought it was fun to drive.

It came as a shock when dad said I led the cup, says Linnea.

Miss the end of the season

Due to the pandemic, the format is a little different this year and the season ends with competitions in both Norway and Finland at the same time, but Linnea unfortunately has no opportunity to go.

Now it can still be enough to win, so it will be a nervous wait at home.

- Of course it's nervous, but I can not influence so much.

There are bigger things in life but it would be cool to win, I will not deny that, says Linnea.

In the video above, you get to meet Linnea Brattgrå at home in Svenstavik, but also see her on the drag racing track.