A forest fire is raging in the southern Spanish resort of Estepona. Hundreds have been forced to flee the flames, reports Reuters. 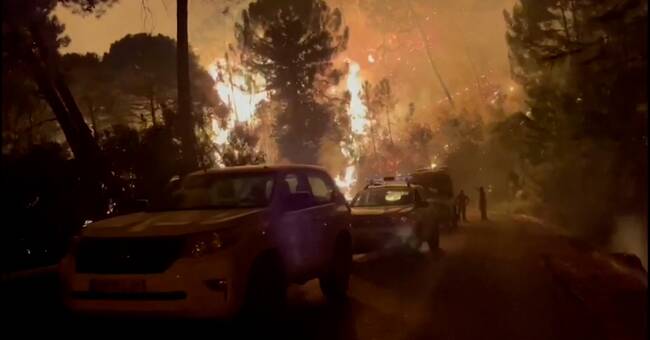 The fire broke out in the Sierra Bermeja mountain area in the province of Málaga and has forced about 800 residents to evacuate their homes, local authorities announced on Thursday.

- The winds are increasing in strength, but fortunately it is blowing from the west, which keeps the fire from built-up areas, says Manuel Marmolejo, fire chief in Malaga, according to TT.

The fire is suspected to have been started when it started in several places at the same time.

Furious forest fires have plagued several countries over the past year.

Since mid-August, the so-called Caldor fire is raging in the crisp woodlands around Lake Tahoe, which is a popular tourist destination on the border between the states of California and Nevada.

The fire has crept ever closer to the lake and forced increasingly extensive evacuations.

On September 1, TT reported that several villages have been completely emptied of people and along the roads are crowded motorists who in a panic leave the smoke-filled area.

In total, around 50,000 people are affected by current evacuation orders issued by the authorities, the news agency wrote at the time.

In the midst of an ongoing heat wave, devastating ground fires also broke out in Turkey.

In mid-August, 200 forest fires broke out around the country.

It has caused severe devastation, and several people have lost their lives.

Also in Algeria, tens of thousands of hectares of land have burned and at least 90 people have died in fires, of which over 30 soldiers, according to TT.

In Greece, huge fires have destroyed more than 100,000 hectares of forest and agricultural land.

The fires are the worst ecological disaster in the country in decades, but are now under control, according to the rescue service.