"Shifts responsibility for the loss": why Biden extended the emergency regime due to the threat of "interference" in the US elections

Joe Biden extended the state of emergency for a year due to the threat of foreign interference in the elections. This message was published on the White House website. An emergency decree was passed in the United States in 2018. It allows the country's leadership to extend sanctions to individuals and organizations that Washington suspects of interfering in American election campaigns. The document was first applied in 2019, when the United States imposed restrictions on several Russian citizens, stating that they allegedly tried to influence the course of the congressional elections in 2018. According to analysts, the topic of interference in recent years has become a favorite tool of American politicians who use it to explain their failures. Experts do not rule outthat in the event of the failure of the Democratic Party in the next congressional elections, the White House can again blame the Russian Federation or the PRC for everything. 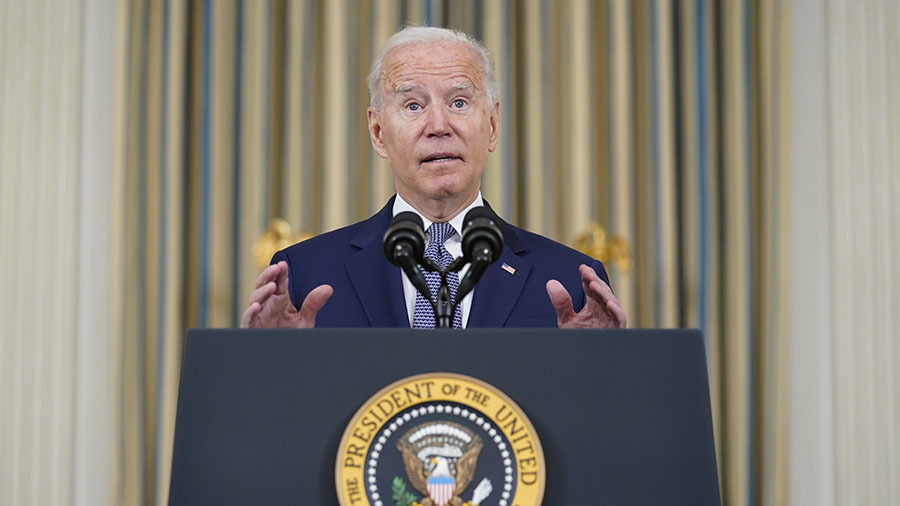 US President Joe Biden has extended the state of emergency for a year in connection with the threat of foreign interference in the American elections.

In a statement, the American administration states: “Despite the lack of evidence that any foreign power influenced the results (voting. -

As noted in the document, "in recent years, the proliferation of digital devices and communications based on the Internet has led to the emergence of significant vulnerabilities, as well as increased the scale and intensity of the threat of foreign interference."

“The ability of individuals who are wholly or substantially outside the United States to interfere with or undermine public confidence in American elections, including through unauthorized access to election and campaign infrastructure or the covert dissemination of propaganda and disinformation, remains special. and an extraordinary threat to national security and foreign policy of the country, ”the White House believes.

“Therefore, pursuant to Section 202 (d) of the Emergencies Act - 50 USC 1622 (d) - I am extending the national emergency regime declared by Executive Order 13848 by one year due to the threat of foreign interference in the US election or undermining public confidence. to them, "- noted on the website of the President of the United States.

Recall that decree 13848 was signed in 2018 by then President Donald Trump ahead of the midterm elections to the US Congress, which took place at the end of the same year.

It is worth noting that the document was adopted against the background of hysteria that did not subside in the United States about the alleged interference of the Russian Federation in the US presidential elections in 2016.

According to the decree, the director of national intelligence is obliged to assess threats of possible foreign interference in the elections.

The State Department and the Ministry of Finance, in turn, should provide the head of state with recommendations on the issue of imposing sanctions in response to such interference.

The decree also involves the use of additional measures against countries that undermine the US economy or interfere in it.

In 2019 and 2020, Trump has consistently extended the state of emergency for a year.

The first sanctions under the new decree were announced by Washington in September 2019.

The US Treasury then imposed restrictions on Russian citizens Denis Kuzmin and Igor Nesterov.

In addition, Autolex Transport, Beratex Group Ltd and Linburg Industries are subject to the restrictions.

The reason for these restrictions was reports that the Russian Federation allegedly intervened in the mid-term American elections in 2018.

At the same time, Washington did not provide any evidence at that time.

Despite the fact that the decree does not say from which countries the greatest threat of interference in the elections comes, experts note that it was directed primarily against the Russian Federation.

The first accusations against Russia of interfering in the American elections were made in the United States at the end of 2016.

At the same time, Washington imposed sanctions against a number of Russian citizens and companies, accusing them of organizing and carrying out cyberattacks on American political institutions.

In addition, sanctions were imposed against five Russian departments and organizations, including the FSB and the GRU.

To investigate "interference in the US elections" a special commission was created under the leadership of Special Prosecutor Robert Mueller.

She studied this issue for about two years, but she did not reveal any collusion between Trump's headquarters and the Kremlin.

Moscow has repeatedly denied accusations of meddling in American elections.

So, in 2020, speaking at the site of the Valdai discussion club, Russian President Vladimir Putin recalled that the United States was never able to establish the fact of interference.

“You said that Russia is actively working, actively interfering.

And I say: we do not interfere anywhere.

Moreover, all the investigations that were carried out officially in the United States, including with the use of such an institution as a special prosecutor, have led nowhere, ”Putin said.

According to analysts, the current extension of the emergency regime, as well as accusations of interference with the Russian Federation, are part of the American internal political struggle.

"This decree on the introduction of a state of emergency in connection with the threat of foreign interference in the US elections is a factor of domestic politics and a political game," American political scientist Dmitry Drobnitsky said in an interview with RT.

Experts state that the topic of interference in elections in recent years has become a favorite tool for US politicians, with which they explain their failures.

At the same time, political analysts believe, the Joe Biden administration has not yet decided whether it will play the card of interference in the upcoming congressional elections, but this option remains working, so the emergency regime was extended.

“The White House does not yet know whether to use the factor of foreign interference and, in general, how to hold midterm elections to Congress.

Considering that for the Democrats, to which Biden belongs, against the background of the events in Afghanistan, an unfortunate situation is developing, the factor of foreign interference in the elections may come in handy.

I do not exclude that the Democrats will accuse their opponents of collusion with a foreign state, ”says Drobnitsky.

Andrey Sidorov, head of the Department of International Organizations and World Political Processes at the Faculty of World Politics at Moscow State University, shares a similar opinion.

“Given that the Democrats' rating is falling after the Afghan events, Biden is now trying to take steps that will prevent Republicans from winning back both houses of Congress in the midterm elections.

If the balance of power unfavorable for the Democrats develops in the upcoming elections, as a result of which they will lose at least one of the houses of Congress, Biden will shift the responsibility for the loss to foreign interference, accusing Russia or China of it, ”the analyst said in an interview with RT.

In general, the experts interviewed by RT agreed that the topic of foreign interference in elections will play an important role in American internal political processes for a long time to come.

"What to talk about if the Democrats still accuse Trump of" collusion with the Kremlin. " They will juggle this idea for a long time to their advantage. So if they lose in the midterm elections, they will blame not their failed policy, but some foreign power, ”concluded Andrei Sidorov.