The UAE has achieved an inspiring global success story as a destination for growth, investment, comprehensive economic development and quality of life over the past fifty years in various fields. This success is the result of hard work for five decades, and as a result of the successful policy pursued by the government in developing the sector 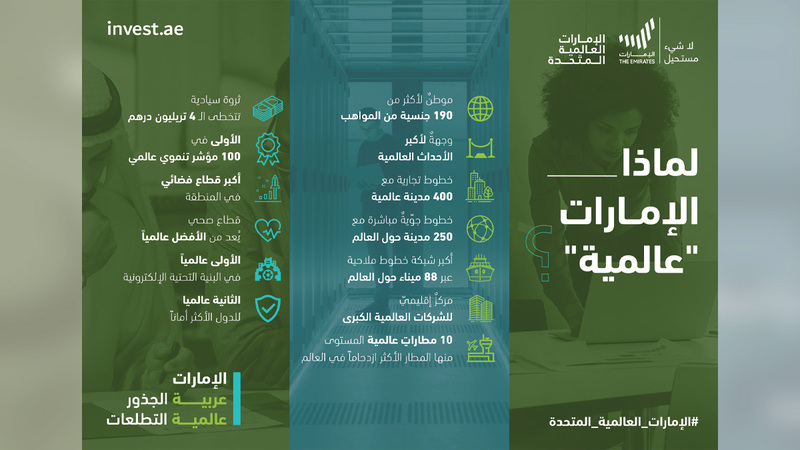 Thanks to its strategic location, strong financial reserves and sovereign wealth funds

The UAE has achieved an inspiring global success story as a destination for growth, investment, comprehensive economic development and quality of life over the past fifty years in various fields. This success is the result of hard work over five decades, and as a result of the successful policy pursued by the government in developing various sectors and the success of the country's economic system, so that the UAE has become a global economic center, the most developed and the fastest growing in the region.

Thanks to its strategic location, strong financial reserves, sovereign wealth funds, and government spending on major development projects, in addition to continuously updating public policies and achieving a sustainable competitive knowledge economy by encouraging innovation, research and development, strengthening the regulatory framework for key sectors, and encouraging sectors with high added value. The UAE has become a global model for developing the business environment, enhancing the country's attractiveness for investments, and creating a stimulating environment for innovation that brings the UAE to the first places globally on the Global Innovation Index.

The country is heading towards the next fifty years to be among the best countries in the world in the field of entrepreneurship, as it continues its role in unlocking the potential to accelerate economic development by encouraging small and medium-sized enterprises in the private sector and instilling a culture of entrepreneurship, to graduate generations with a spirit of leadership, creativity, responsibility and ambition.

Despite the United Nations estimates that foreign investment flows worldwide will decrease by 42% in 2020 due to the “Covid-19” pandemic, the UAE achieved a 44% growth in foreign investments incoming to the country in 2020, compared to 2019, to reach 73 billion dirhams. The UAE ranked first in the Arab world and 15th globally in terms of its ability to attract foreign direct investment, according to the results of the Global Foreign Direct Investment Report for the year 2021.

These investments included all sectors and economic activities.

The investments focused on sectors that serve the modern technologies that underpin the digital economy, such as artificial intelligence, the Internet of Things and Blockchain, innovative medical technologies, high-speed transportation, augmented virtual reality, robotics and self-driving cars, and renewable energy.

The flows of Emirati investments issued to the world during the year 2020 amounted to about $9.2 billion, equivalent to (33.8 billion dirhams), and they have proven highly efficient in regional and international markets in various vital economic sectors.

As a result of the national efforts exerted to support the economic renaissance, the UAE has become a global and regional headquarters for more than 25% of the world’s 500 largest companies and a primary investment destination for foreign capital that will continue to flow significantly in the coming years, as a result of giant projects led by the tourism, industry, transport and renewable energy sectors. The UAE is one of the most advanced countries in the world in enacting economic laws and legislation that protects the investor in a competitive environment characterized by transparency and in which all the necessary facilities are available to engage in any commercial activity.

The UAE provides legal advantages and facilities, within the most flexible and competitive legislative and procedural umbrella in the region, that stimulates the attraction of foreign investments and ensures the stability of the business community in the country, including the provision of tax exemptions, as the state does not impose income tax on companies.

The country's gross domestic product during 2020 amounted to about 421 billion dollars, which indicates the strength and stability of the economy in the country, despite the conditions faced by the global economy as a result of the repercussions of "Covid-19".

The UAE maintained its ranking as one of the highest countries in terms of GDP per capita in the world, as a result of the increase in per capita GDP to 160,000 dirhams last year.

The country's per capita GDP, according to World Bank estimates, exceeds that of many countries such as Britain, Spain, New Zealand and France.

The UAE has succeeded in being among the fastest responding in the world to the “Covid-19” pandemic crisis, dealing with its effects, and maintaining its position among the best economies and destinations for living and investment in the world.

It was one of the first countries to launch many initiatives and economic stimulus packages to upgrade the economy and help all sectors adapt to the requirements of this global shift in work patterns as a result of the exceptional precautionary measures imposed by the pandemic.

The UAE has the most advanced digital infrastructure in the region, and ranks first in the Arab world and at the level of countries in the region in the Digital Competitiveness Index for the year 2020, and provides advantages and legal and logistical facilities, within the most competitive legislative and procedural umbrella.

The UAE’s investments were not limited to the traditional energy sectors, as the country succeeded in achieving pioneering achievements in developing and enhancing the energy future, which paved the way for a strong entry into the field of renewable energy, as renewable energy has emerged as a fundamental pillar of sustainability.

The UAE is leading global efforts in the clean and renewable energy sector through its strategies and investments in this field. The Emirates Energy Strategy 2050 targets a mix of renewable and clean energy sources to ensure a balance between economic needs and environmental goals. The country will invest 600 billion dirhams until 2050 to ensure that the demand for energy is met. Energy and sustainable growth in the country's economy.

The UAE is connected to more than 250 cities around the world with direct lines, and it is a major player in international trade and shipping lines through shipping lines to more than 400 cities, and through a land, sea and air transport system that is the most efficient and the most geographically wide in the region and the fastest to reach anywhere in the world. the world given its geographical location.

The UAE is characterized by the presence of specialized and free industrial zones and its strategic distribution over the emirates of the country in accordance with all requirements.

The UAE is home to more than 28 business and logistics zones. These zones have global competitive capabilities and advantages that attract long-term investments from companies that are always looking for options to improve their competitiveness. They take the decision to establish a new facility in an industrial zone, whether for manufacturing or to meet logistics and distribution requirements to benefit From an enabling business environment system, access to markets and raw materials.

The UAE is an economic capital in the region and an ideal environment for incubating various economic activities and doing business, and the industrial sector in it enjoys an exceptional support system, thanks to several factors and advantages, foremost of which is the great economic stability, the environment, the strategic location and strong and continuous government spending.

The country is rich in traditional, vital and renewable energy sources, which are required for the industrial sector, such as chemicals, minerals, gas and raw materials. The UAE has the best and most integrated infrastructure of its kind in the region in transportation, communications and services, in which all the conditions and standards that ensure the growth and prosperity of the industrial sector are met. sustainably.

All these factors and other exceptional investment elements that tell the inspiring story of the UAE, a global destination for investment, talent and opportunities in various economic sectors and a destination for quality living in a vibrant community of more than 190 nationalities highlighted by the "50 projects", and the "50 projects" that establish a new development stage and leaps A comprehensive economic program to highlight the capabilities and privileges of international standards granted by the UAE to investors, entrepreneurs and talents of different nationalities and in various economic sectors, and to attract them to work in many qualitative sectors, and to invest in areas of added value for their money.

The UAE government is keen on strategic planning for the coming years and decades, as the UAE was one of the first countries to establish sovereign funds to invest surplus oil and non-oil revenues.

Foreign investments constitute an essential part of diversifying sources of income and contribute to the development of Emirati human resources and the refinement of national skills, through the work of many Emiratis in many companies and factories around the world. The UAE no longer imports skills, but rather begins to export them, to work in various countries of the world.

The UAE government is keen to implement best practices that will support its efforts in managing the economic file and enhancing its flexibility in dealing with the challenges created by the global pandemic in the medium and long term. modern applications and the applications of the Fourth Industrial Revolution, especially that the government is working with all concerned parties according to an ambitious vision to double the national economy over the next ten years to reach three trillion dirhams by 2031.

The comprehensive support plan announced by the Central Bank worth 100 billion dirhams, and other financial support packages approved by the federal and local governments, contributed to stimulating the UAE economy, ensuring the continuity and protection of consumers and companies.

The UAE ranked first in the Arab world and second globally in the list of the most flexible countries in dealing with and responding to the “Covid-19” pandemic, within the “Resilience to Dealing with Epidemics 2021” index, issued by the Consumer Choice Center, which represents the rights of consumers in more than 100 countries around the world. the scientist.

The Emirates is the investment front and the most developed and fastest growing economic center in the region.