The climate is tense in the majority in view of a Council of Ministers scheduled probably on Thursday. The vote of the League together with FdI has exacerbated the spirits 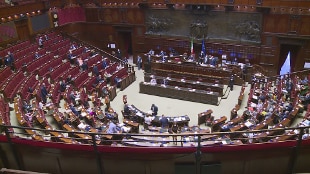 07 September 2021 Technicians at work on the Green pass, which could arrive in the Council of Ministers as early as Thursday this week, after a passage, as usual, in the control room to untie the knots left on the table.

The conditional is a must.

The dl, according to several sources, should be unique and involve public administration employees and private sector workers. While on the front free tampons, a theme dear to the League, these should only be provided for some narrow categories. But there are also tensions within the government.

Hard attack by the Pd and M5s on the League, after the vote in the chamber on the amendments to the Green pass decree. "Not some exponents but, as the numbers show, the whole League voted for the FdI amendment and therefore against the government. 134 votes are in practice the sum of their votes plus those of the opposition. Irresponsibility and inconsistency with the government. these are evidently the characteristics chosen by Salvini and his team when dealing with the most delicate issues for citizens ". This was stated by Emanuele Fiano of the Democratic Party referring to the vote in the Chamber of the Chamber on the norm relating to the Green pass in the Covid dl.

"Salvini says that the government does not risk, but here it risks consistency and for me it counts in politics, just like the numbers. If there is a majority party that in the CDM does not raise its hand on the Green pass and approve it, then vote for a suppressive amendment, there is a problem of consistency. We are here, not the League, to defend what the CDM voted for, others do not, I respect them, but I do not respect the inconsistency and out of here the Italians want to know if there is "Is it a coherent government majority or not. Staying in the majority is not a game, either on one side or the other", he concluded.

Even M5s, with the group leader Davide Crippa, observed: "For the first time today a vote of support by a majority force for an amendment presented by the opposition was revealed in the Chamber. But there is a question of consistency. : in the CDM you approved the measure and then in Parliament you supported an amendment calling for the abolition of the green pass. You must make it clear to the Italians which side you are on. It is the disavowal of the government's line: this is the line of Salvini or Giorgetti ? Can anyone explain it to us? ".

Salvini: No government risks, but tensions over the dl

While the examination and the votes on the measure continue, in the courtyard of Montecitorio there are several venting groups between deputies and managers. "It's an incomprehensible line. The overwhelming majority of Italians are in favor of vaccines and the green pass. Why should we threaten to vote against or abstain? Why keep chasing FdI for a handful of votes?".

The criticism does not explicitly affect the secretary but is told, with surprise, the dismay of many when Salvini, yesterday, during the meeting of the federal council, defended the choice to entrust this game to Borghi.

The League - says Salvini - votes on some amendments of the Brothers of Italy to the decree, but guarantees that this determines "zero" risks for the government. "I don't think - explains the secretary of the League - that the government depends on whether one wants to go to a restaurant to eat pizza with or without the green pass. I think the government has other challenges far more ambitious than these".

The League withdrew the amendments to the green pass decree, adds Salvini, "because otherwise the government would have put the trust and there would not even have been a debate in Parliament and therefore there would not even have been the possibility of discussing a single amendment, while now the amendments on restaurants, cultural activities and free swabs are being discussed ", especially" for families and schools ", where free quick tests" would be a guarantee, because I would not want schools to reopen and close shortly after " .

Letta: "The League does not care about the health of Italians"

"On the green pass we ask for clarity: you cannot stay in the majority and in the opposition at the same time. From the Lega I found a very serious, irresponsible attitude. The League has no heart for the health of Italians and is not a reliable government partner". Thus Enrico Letta, secretary of the Democratic Party, on the sidelines of an electoral meeting. "The green pass is essential, everyone's health is at stake".

The nodes of the Green pass

A compulsory green pass for dozens of categories of workers, including blue-collar workers, but the knot on tampon costs is not yet resolved. After having collected the certainty for the vote on the Covid emergency decree law without the need to place trust, the Government aims to extend the use of the certificate to public administration employees and companies. However, a series of questions remain to be resolved on a practical and political level, in view of a possible Cdm next Thursday: the idea is to reach the synthesis in a new law decree consisting of a single article, which should provide for the extension of the pass. to employees of the public administration and the private sector.

Despite the pressure of Confindustria, the government transpires that - excluding the fragile ones - the cost of tampons will not be covered by the state not only because the community will not have to pay for them but because this would constitute a strong disincentive to vaccination. All in anticipation of next Friday's monitoring that could announce the new tightening in Sardinia, increasingly poised between the white and yellow areas, given the high percentages on the occupancy of beds for Covid.

Even if the data are stable at the moment, the executive's gaze is turned to autumn and the risks of a new wave. Filed the issue on the vote in Parliament on the first decree at the end of July that introduced the Green pass - all the majority parties, including the League, have withdrawn the amendments to the legislative decree being examined by the Chamber - the Government is ready for the new provision, also in light of the agreements between trade unions and Confindustria in these hours: the green certificate, probably from October, will be necessary for state and private employees.

The examination of the covid decree law which contains the rules on the Green pass, extends the national state of emergency to the end of the year and reviews the health parameters for the passage of color in the regions of the country, will resume tomorrow at 9.30 in the Chamber. The text, which will also have to be discussed by the Senate, expires next September 21st. There are still about twenty amendments to be voted on, some by secret ballot.