Motorists in Dalarna may encounter an unusually large crew on Monday. A 220-tonne transformer will be transported from Falun via Orsa and Mora, to be finally placed at the Åndberg wind farm southwest of Lillhärdal in Härjedalen municipality. 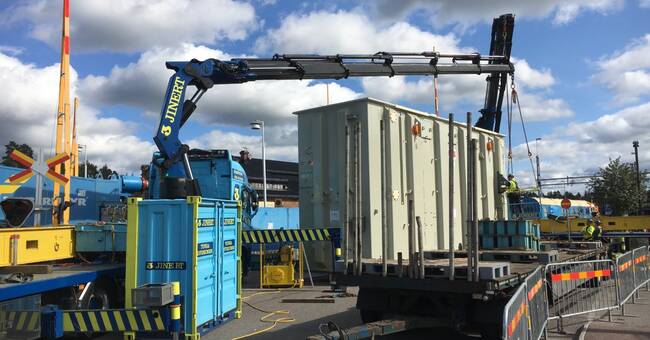 A giant electric transformer has begun its journey through Dalarna to Härjedalen.

The transformer has the dimensions 10.5 x 5 x 3 meters and has first traveled with a special freight wagon from Ludvika to Falun.

It was probably the simplest part of the transport, which will then go on a public road the little over 20 miles up to Åndberg in southern Härjedalen.

The transformer is manufactured by ABB in Ludvika and will be connected between wind turbines at Åndberg and the 400 kilovolt power line network.

Its job will be to transform the voltage from the 130 kilovolts that the wind turbines themselves produce.

The route has been planned for several years

It is a difficult operation to move the large transformer.

There are bridges on the stretch that can not handle the load.

The total weight with a special truck included will be 315 tonnes, and it has taken several years to investigate suitable routes and plan for car transport.

- The route we have chosen now is the fourth alternative we developed.

Previous proposals have had to be scrapped because the roads must be dimensioned to withstand the weight they are exposed to, says Jesper Liveröd, press manager at Ellevio.

The exact route is only nailed on departure

Despite this, the exact transport route is not determined at the moment, but depends on what permits you will receive when the entire crew is loaded and ready.

Planned departure from Falun is at 04 o'clock on Monday morning and it is likely that you try to avoid going through the roundabouts in Rättvik because the crew is not only heavy but also 45 meters long.

Therefore, the road from Bjursås to Övre Gärdsjö will probably be used, and then on to Orsa via Skattungbyn.

Then around Orsasjön on the north and west side and towards Mora, but then turn right towards Älvdalen.

From Rot, the road then goes towards Lillhärdal, but all the way there you do not have to go as Åndberg is closer to the valley border.

The truck journey is expected to take up the entire Monday.

The huge transformer was run on Saturday by train from Ludvika and loaded on Sunday to a specially built truck.

Once the transformer has arrived in Åndberg, it will ensure that approximately 160,000 households can be supplied with electricity from the wind farm.

See photos from the transhipment at the train station in Falun in the video above.

The transformer is being reloaded from a railway to a truck in Falun.