The obstacles to litigation are many

Swedish women who have been in IS camps in northern Syria will not be brought to justice here in Qamishli, as previously stated. Instead, they are now being deported to Sweden.&nbsp; 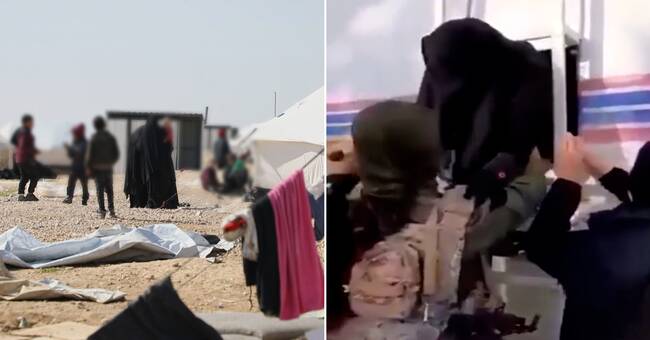 It was just over a year ago that the Kurdish self-government announced plans to hold trials against foreign IS women here in northern Syria, at a place where the crimes of the terrorist sect had been committed.

But the lack of resources and the fact that Kurdish autonomy is not an internationally recognized state are some of the obstacles that have stood in the way.

Now a group of women who have been locked up in prison camps in northeastern Syria are on their way to Sweden with their children.

In the near future, more women will be deported to Sweden.

Several have been smuggled out

Ever since the terrorist sect Islamic State lost the last remnants of its so-called caliphate here in Syria, Kurdish self-government has appealed to the outside world: “Bring home your citizens who traveled here.

We do not have the resources to judge and imprison them ”.

In March 2019, during the end of the offensive against IS, the Al Hol prison camp flooded its banks when thousands of IS terrorists and their families poured out of the IS stronghold Baghouz.

The men were imprisoned and women and children were put in concentration camps.

Among those detained were about thirty Swedish women and their children.

Several of the women have escaped over the years and some of them have returned to Sweden.

The crimes committed by the terrorist sect IS include genocide, torture, ethnic cleansing and sexual slavery - and the need for justice is great.

The UN has repeatedly called on the Member States to repatriate their citizens from northern Syria and try them in court.

But few countries have listened.

Instead, Sweden has backed a proposal for an international tribunal that will hold IS members accountable in the region, but that idea has not gained any widespread support.

The world around us is fragmented

France has proposed that detainees from Kurdish autonomy be relocated to neighboring Iraq and sentenced there, but that proposal has also been rejected by several EU countries, as legal certainty is being questioned in Iraq and the country is applying the death penalty.

And since Iraq and Syria are not affiliated with the International Criminal Court (ICC), the chances of prosecution of IS members are slim.

On the other hand, several countries have prosecuted for violations of international law against IS members in their national courts, which is possible even if the crime was committed outside the country's borders.

The camps are a breeding ground for new terror

The war in Syria has been going on for ten years, and the security situation in Kurdish autonomy is far from stable.

At the same time as the Kurdish SDF forces are fighting IS cells in the area, they are fighting against Syrian militias that have support from Turkey.

There have been a large number of escapes from the camps where 11,000 people from all over the world are sitting.

In an interview with SVT this spring, SDF spokesman Kino Gabriel likened the situation in the al Hol prison camp to a "mini-caliphate".

More than half of the inhabitants are children.

"The camp is a breeding ground for new recruitment to IS," he said.

At the same time, the humanitarian situation is difficult.

The fact that women are coming to Sweden now is a consequence of the Kurdish self-government expelling them.

The Swedish Ministry of Foreign Affairs states that it has an obligation to receive its own citizens and that this must be done in accordance with international practice.

Just outside Qamishli, the building where the trials were to take place is still half-finished.

News/Politics 2021-09-15T06:54:29.075Z
The person in charge of the Eighth Procuratorate of the Supreme People’s Procuratorate answers questions on typical cases of prosecution public interest litigation
Business 2021-08-16T22:15:49.369Z
It took 3 years for a domestic LED company to win the US "337 Investigation" for the first time
News/Politics 2021-12-24T11:38:53.128Z
my country amended the Civil Procedure Law to make it clear that online litigation and offline litigation have the same legal effect
ADS
News/Politics 2021-11-09T04:55:17.697Z
Opinions of the Supreme People's Court on Deepening the Rectification of False Lawsuits
News/Politics 2021-10-14T20:10:22.800Z
Blind way, why not help "blind"? Blind people report that the blind track is occupied and difficult to travel
News/Politics 2021-11-09T04:55:05.201Z
Supreme Law: Fictitious house purchases should be deemed invalid for the purpose of circumventing regulatory policies and other purposes
News/Politics 2021-12-08T20:52:52.298Z
How to promote clean justice with precise supervision and better safeguard fairness and justice?
Business 2021-11-12T12:01:25.516Z
The person in charge of the relevant department of the China Securities Regulatory Commission answered reporters’ questions on the judgment of Kangmei Pharmaceutical’s Special Representative Lawsuit
News/Politics 2021-09-02T06:20:57.791Z
China’s highest inspection system is issued as a high-speed rail "prevent disease prevention" and other guiding cases