Taiwan youth holding a guitar to enter the mainland: using music to hold the two sides of the strait

Chinanews.com, Chongqing, September 3, title: Taiwanese youth holding a guitar to enter the mainland: using music to hold the two sides of the strait   Author Zhong Yi Zhao Xiaoyu   With his beloved guitar in his arms, Hua Qiyang from Taipei became the first master of classical guitar performance at the Sichuan Conservatory of Music in September 2008. After graduating, Hua Qiyang founded the W 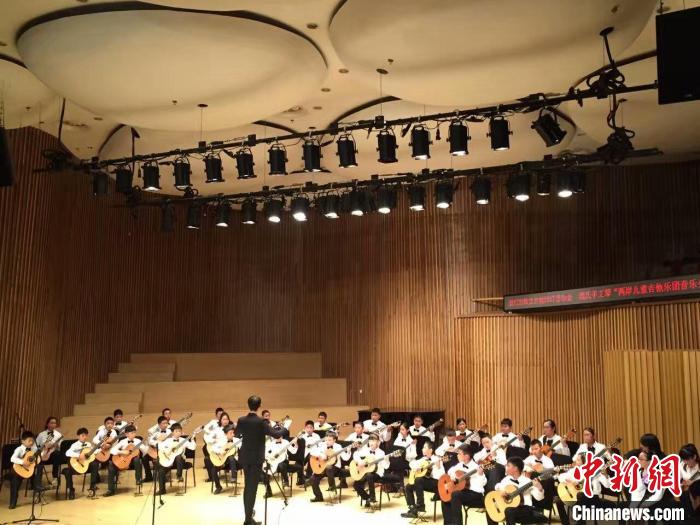 Chinanews.com, Chongqing, September 3, title: Taiwanese youth holding a guitar to enter the mainland: using music to hold the two sides of the strait

With his beloved guitar in his arms, Hua Qiyang from Taipei became the first master of classical guitar performance at the Sichuan Conservatory of Music in September 2008.

After graduating, Hua Qiyang founded the Wuxian Children's Guitar Orchestra in Chongqing to popularize classical guitar in the southwestern part of the mainland, and use music to hold both sides of the strait.

On the 3rd, in an exclusive interview with a reporter from Chinanews.com, Hua Qiyang said frankly that after 13 years of living in the mainland, he not only saw the rapid development of the city, but also smelled the broad prospects of the art market.

The picture shows the exchange between Chongqing and the Taipei Children's Orchestra.

The guitar is one of the three major musical instruments in the world, but it is relatively late to enter the mainland. Many people understand that guitar is through popular music.

Hua Qiyang believes that classical guitar music is the essence of guitar performance. "It has a complete historical system. Classical music, like ancient poetry, has a unique structure in each era, which is contemporary and classic."

Compared with the mainland, Taiwan’s guitars started earlier and the market is more mature.

After graduating from Tainan Normal University in 2007, Hua Qiyang originally planned to go to Paris, France to study the classical guitar research institute.

However, his teacher, Xie Qianlong, a well-known guitarist in Taiwan, recommended him to visit the Sichuan Conservatory of Music for further studies.

After graduating from a master's degree, Hua Qiyang decided to start his own business in Chongqing due to his love for Sichuan and Chongqing's "spicy life".

At that time, there was no children's guitar orchestra in Chongqing, so he opened a dance string guitar training school, organized an orchestra, and took root in classical guitar teaching.

Different from traditional music training, the dance string guitar training school integrates the music education methods of Taiwan's elementary schools and adopts the scientific training of the orthodox school of music. The environment, teaching plan, and performance mode are all unique, and it has won praises from many students in a short period of time.

At present, Hua Qiyang has opened 3 branch schools in Chongqing, and dance string guitar has become one of the classical guitar education institutions with strong folk professionalism in the southwest region.

"It is a wonderful thing to be able to accompany my family with music." Hua Qiyang believes that music should not only involve a small number of professionals, but must enter the family and integrate into life.

Music has nothing to do with business. It is like an ocean in which everyone can find their own possibilities of music, expand their fields, and start "treasure hunts and adventures."

In teaching, Hua Qiyang emphasized "equal emphasis on learning and practice", advocating to hone learners' perception of music through indoor concerts, outdoor flash mobs, rural studies, etc., not only teach students how to play music, but also teach them how to overcome timidity. , Express yourself bravely.

"I hope to create more opportunities for students to exercise, step by step from the small stage to the big stage." Hua Qiyang introduced that the Dance String Guitar Orchestra has successfully held eight sessions of "Our Music Dream" special concert.

Since 2015, Hua Qiyang has also used music as a link to open cross-strait music exchanges.

He has successively planned and organized activities such as "The Other Side of the Musical Department" and Cross-Strait Children’s Orchestra exchange concerts. He invited Taiwanese musicians and Taiwanese children’s music groups to perform and share in Chongqing. He also took the Dance String Guitar Orchestra to Taipei Zhengyi Primary School to meet with students in Taipei. Performing on the same stage and having classes in the same class allows children on both sides of the strait to increase their understanding.

The picture shows Hua Qiyang instructing the rehearsal of the Hundred Orchestra.

Facing the future music market, Hua Qiyang admitted that he has both confidence and ambition for the popularization of classical guitars.

Considering that “the national is the world”, he began to try to adapt and compose in his spare time, co-creating with young composers, and strive to realize the localization of classical guitar music as soon as possible.

He has performed charity performances in villages and hospitals, and has also performed in Jiangxi, Shanghai, Guangdong, Guiyang and other places.

Recently, Hua Qiyang, whose ancestral home is in Jiangsu, wants to embark on a "root-seeking journey" to trace the family context in the alleys in the south of the Yangtze River where his ancestors lived.

"After the college entrance examination in 1998, I visited my clan in Shanghai. I have a special affection for the mainland." Hua Qiyang said that although there is a bend in the strait, he will continue to use music as a link to promote cross-strait exchanges. The concept of "a family relationship between the two sides of the strait" is more deeply rooted in the hearts of the people.