Fire in Milan, searches to seize papers on the cladding panels 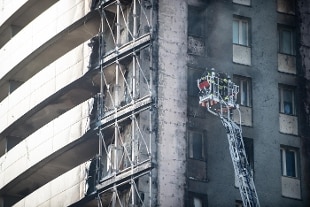 03 September 2021 Searches to seize documents relating to the panels of the external cladding of the Torre dei Moro in via Antonini, the 18-storey skyscraper that last Sunday burned into a glowing torch, are in the offices of Aza Aghito Zambonini in Fiorenzuola ( Piacenza). The operations 'with third parties' to collect the cards were arranged by the deputy prosecutor Tiziana Siciliano and by the prosecutor Marina Petruzzella as part of the investigation for culpable disaster still against unknown persons.

The team of investigators consisting of Fire Brigade and Judicial Police personnel at the Milan Public Prosecutor's Office is gathering in the company "specialized - we read on the company's website - in the design, production, installation and customization of facades for residential buildings, commercial, or for industrial use "commercial documentation and tenders, material data sheets and all that will be used to shed light on the external panels. Among the various knots to be solved, there is also the one on the role of Aza Aghito Zambonini in the realization of the external 'sail' shaped roof of the skyscraper in via Antonini. Basically we want to understand if he has produced the panels supplied or has only marketed them. In this case it will therefore be necessary toalso go back to the manufacturer.

Meanwhile, while the investigations continue with the hearing of many people, the owner of the apartment on the 15th floor, the one from which the fire developed, has been traced, which must also be heard.

From what has been reported, the Fire Brigade, who have already assembled the various videos on the fire into a single video in which what happened is reconstructed and are drafting a report to be delivered to the Prosecutor's Office, in just three days they carried out 110 access to allow tenants to recover personal effects in their devastated homes.