Mostra del cinema, at via Venezia78 in the name of Benigni

Golden Lion for Lifetime Achievement to the Oscar-winning director and actor Serena Rossi at the 78th Venice Film Festival (Ansa) Venice, Benigni: "I can't dedicate the Lion to my wife Nicoletta, it's hers" Venezia78, Almodóvar's "Madres paralelas" opens the race for the Lion Venice Film Festival, Benigni's day Share 01 September 2021 Venice 78 begins. In the presence of the President of the Republic Sergio Mattarella - warmly welcomed by applause and standing ovations 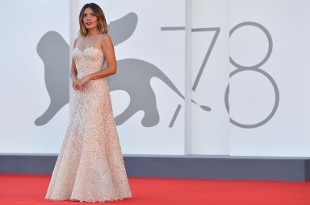 01 September 2021 Venice 78 begins. In the presence of the President of the Republic Sergio Mattarella - warmly welcomed by applause and standing ovations - and of the Minister of Culture Dario Franceschini, with Roberto Benigni Leone d'oro for his career as star performer, the Venice Film Festival kicked off on 11 September by a jury chaired by the Korean Bong Joo-ho, the Oscar director for "Parasite", will award the 2021 Golden Lion.

An edition of great expectations for the selection with highly anticipated films and for the atmosphere that reigns in the Lido, crowded with accredited people, 9 thousand from all over the world compared to the 'brave' 6 thousand of last year in full pandemic, which pushes to believe that cinema can really start again from here. '' I love Mattarella, I would like to hug her and stay a few more years ''. And again: '' Leo? I deserved a kitten '', jokes the unstoppable Benigni explaining that when he found out he "took rumba steps, naked though. '' Very excited, receiving the Lion for Lifetime Achievement greeted by a standing ovation from the public. '' It is not emotion is more - he says - what I feel is a feeling of love and that I would like to return, make it tenfold ''.Then the moving final dedication: '' I cannot dedicate the lion to Nicoletta: it is hers. I take my tail, the wings are your talent mystery charm femininity. You give off light. Love at first sight, indeed at eternal sight ''.

In short, a highly emotional opening for this festival. If they are two weeks of 'bubble' (as if the diehard fanatics of the hall were concentrated here while the box office languishes)

, it will be discovered later when the arrival in theaters of the films that everyone is waiting for will be the box office test. The fact is that the hopes from here are very high, a Venice of redemption and redemption, was defined in the Sala Grande at the opening ceremony. "It is a golden moment for Italian cinema and here in Venice it will do its part. From Venice there is a real restart! It is time for those who love cinema to prove it by returning to attend the cinemas", said the Minister of Culture, Dario Franceschini, entering the room.

Meanwhile, the first day started with an exciting and touching film: "Madres Paralelas" by Pedro Almodóvar with Penélope Cruz in what she herself defines as "my

". In the seventh film with the Spanish director she is an imperfect mother, willing but far from the rules in a powerful story that starts from the chance acquaintance between two women

in the hospital about to give birth (one Penélope is an established photographer, the other is the minor Ana played Milena Smith, bounced from parent to parent) to address the female universe in its contemporary contradictions.

And not only that: in "Madres paralelas" (in cinemas from 28 October) Almodóvar tackles a strong historical theme, that of memory and accounts with a past that his country has not yet achieved, those thousands of disappeared from the Civil War (the most famous of which is the poet Federico García Lorca killed by Francoists, thrown into a mass grave and whose remains have never been exhumed).

"After 85 years - declares the Spanish director - we have arrived at the generation of grandchildren and great-grandchildren who still do not know where the bodies of their ancestors are". Penélope Cruz, who is also in contention for the Volpi Cup with another film in competition, "Official Competition" with Antonio Banderas and Oscar Martínez directed by Mariano Cohn and Gastón Duprat, in Almodóvar's film offers an interpretation to Anna Magnani. "Each time is a gift, the departure for an intense and exciting journey. When he proposes a part to me I think: 'this man wrote another marvel. It goes without saying that his is the most awaited phone call," he says.