Israel, to the rescue of Abu Mazen and the Palestinian economy

After the formation of the heterogeneous Israeli coalition, in which the center, the left and an Arab party have a majority, the question in June was not whether it was going to take place ... 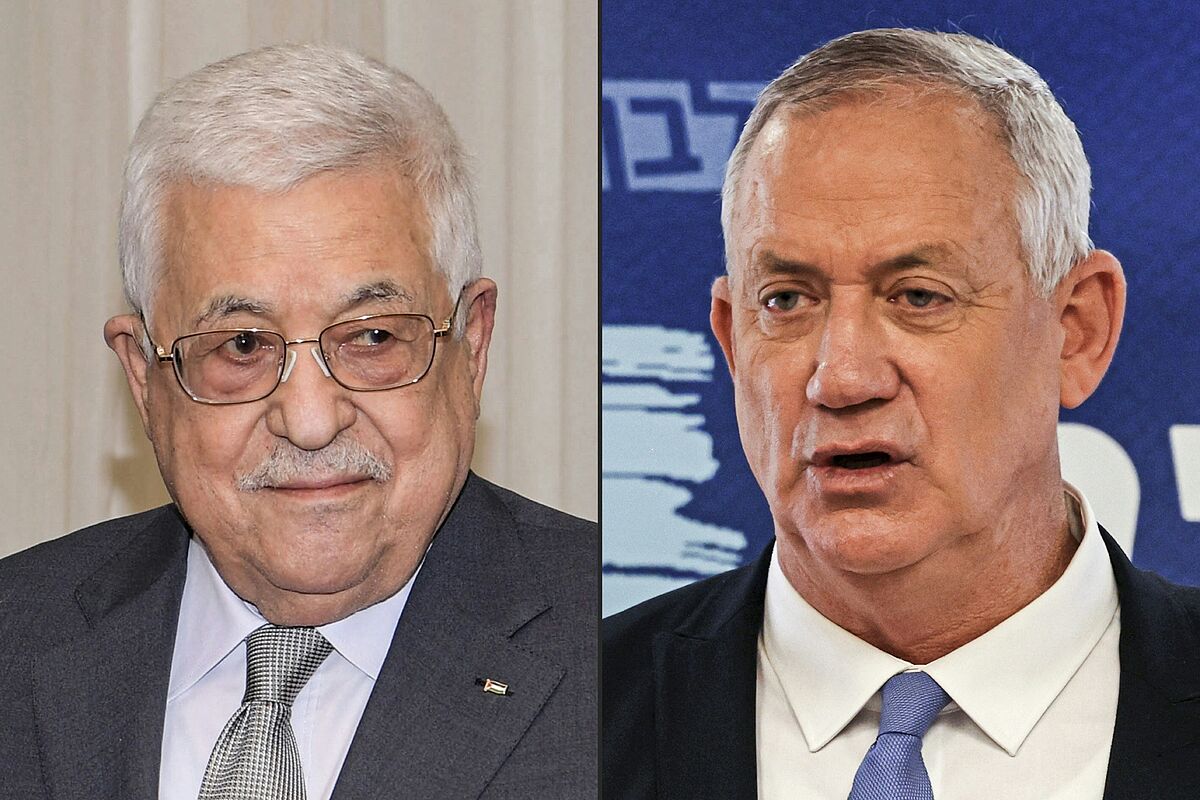 After the formation of the heterogeneous Israeli coalition, in which the center, the left and an Arab party have a majority, the question in June was not whether there was going to be a meeting with the president of the Palestinian National Authority (PNA), Abu Mazen. , if not when. Given that the prime minister in the first two years of the rotating government is the right-wing Naftali Bennett opposed to the creation of a Palestinian state, the other question was who of the two centrist leaders would be the one to dialogue face to face with the veteran

: the Minister of Defense,

or the Minister of Foreign Affairs and

Finally it was Gantz who, after receiving the green light from Bennett, has become the prime minister of Israel to meet in Ramallah with Abu Mazen since 2010, thus breaking a

in the era of Benjamin Netanyahu. The top ANP leader since the elections in 2005 met with President Simón Peres in 2013. Netanyahu and Abu Mazen had a brief meeting in Jerusalem during Peres's funeral in 2016. Two years earlier the last major peace initiative between Israelis and Palestinians led by Barack Obama and John Kerry.

"I met with President Abbas to discuss security, diplomacy, civil and economic issues. I told him that Israel seeks to take measures that

of the Palestinian Authority," Gantz said in a meeting in which they basically discussed economic issues. and security related to the West Bank and Gaza.

Gantz has revealed this Monday some of the Israeli measures agreed with Abu Mazen, such as a

In the meeting on Sunday night in Ramallah - not previously announced to avoid the risk of its cancellation - also participated the Palestinian Minister of Civil Affairs, Hussein Al Sheikh and the head of the Intelligence of the PNA, Majid Faraj. The meeting with all the participants lasted two and a half hours while the solo meeting between Gantz and Abu Mazen lasted 40 minutes. "They dealt with

of Palestinian-Israeli relations," Al Sheikh noted in a short tweet in which he did not mention Gantz's charge so as not to fuel criticism on the Palestinian street.

The fundamentalist groups Hamas and Islamic Jihad have condemned Abu Mazen for meeting with what they call "Zionist Minister of War". According to Hamas spokesman Fawzy Barhum, "it reflects a policy of surrender."

"It is a stab in the back of the Palestinian people and their sacrifice,"

adds Islamist Abdel Latif Qanou about the discreet meeting that ended up being media coverage.

Abu Mazen's interest in celebrating the meeting was clear. Beyond the harsh economic situation of the ANP and the fact that Gantz and Bennett have already met with King Abdullah II of Jordan, redirecting the terrible relations he had with Netanyahu, Abu Mazen is committed to

cooperation in matters of security

in the face of fear Hamas ends up controlling the West Bank as it did in the Gaza Strip in 2007, and despite criticism from Palestinians who accuse it of "cooperating with the occupation."

Under strong internal and external criticism for the persecution of Palestinian dissidents, which had its most tense two months ago with the death of opposition Nizar Banat at the hands of ANP troops, Abu Mazen hopes that in the coming months he will be able to meet with the president American Joe Biden. The resumption of direct dialogue with the Israeli Government would accelerate the invitation from the White House, although in any case it maintains excellent relations with the Biden Administration, in contrast to the harsh confrontation it had with President

a result of the transfer of the US embassy to Jerusalem.

The most nationalist Israeli sector, which does not forgive and will not forgive Bennett for his government pact with the center-left and an Arab formation, has accused him of giving Gantz the green light to meet with Abu Mazen who

"has brought Israel to the International Criminal Court to through slander

and honors and finances Palestinian terrorists in Israeli jails. "

In Bennett's environment they downplay the importance of the meeting in Ramallah, clarifying that "they dealt only

and how to help improve the Palestinian economy" and, in no case, is it the beginning of a negotiation process on the conflict.

Unlike Gantz, Lapid and the left wing in his government, Bennett

The new government, he pointed out in his recent visit to the US where he met with Biden, will not take any decision on this matter desired by its members on the right (annexation of the settlement area in the West Bank occupied in the war of '67) or on the left (creation of a Palestinian state alongside Israel) to prevent its collapse.

The new coalition tries to change the course of the last years in which Netanyahu cornered Abu Mazen in Ramallah and somehow tolerated the Hamas regime in Gaza.

Now, the objective is to

although the price could be a new escalation with the fundamentalist group in Gaza, which in recent weeks has heated the border with the launch of a projectile, crashes and the launch of incendiary balloons. .

Hamas opposes the will of Israel, Abu Mazen and the UN that the PNA be the one to channel economic aid to the very poor Gaza Strip under their control.

Under the umbrella of the US, Israel and the ANP are officially and publicly approaching each other, although the solution to the conflict is still very far away.