Afghanistan: US bombs vehicle linked to IS group in Kabul

The United States this Sunday carried out a new strike in Afghanistan against the Islamic State group in Khorasan (EI-K). An American drone bombed a vehicle, described as an "imminent" threat ... 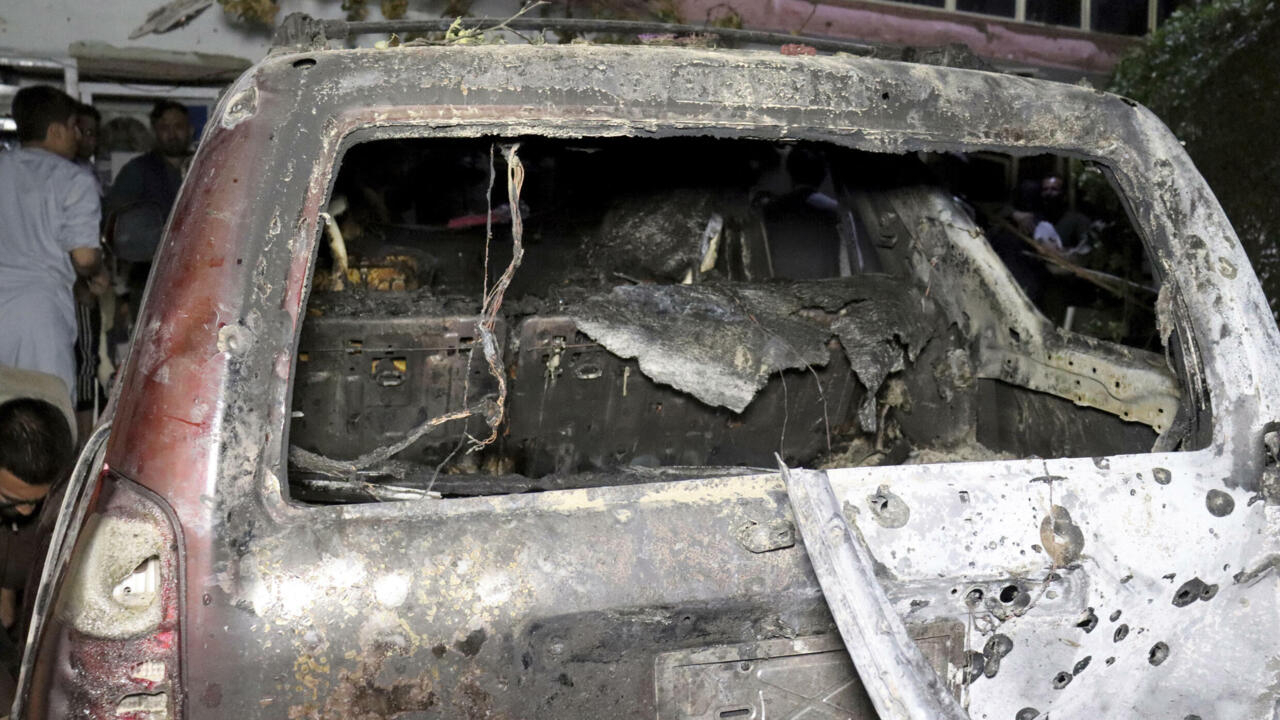 Afghanistan: US bombs vehicle linked to IS group in Kabul

A vehicle destroyed in front of a house in Kabul after an American drone strike on August 29, 2021. AP - Khwaja Tawfiq Sediqi

The United States this Sunday carried out a new strike in Afghanistan against the Islamic State group in Khorasan (EI-K).

An American drone bombarded a vehicle, described as an "imminent" threat against Kabul airport.

US forces today carried out a defensive air strike

" by drone, launched from outside Afghanistan, "

against a vehicle in Kabul, eliminating an imminent IS-K threat to the international airport

" Hamid Karzai, said Bill Urban, a spokesman for the US central command.

A Taliban spokesman confirmed the US strike, saying a car bomb was destroyed as he headed for the airport and a likely second strike hit a house nearby.

We are sure we have hit our target,

Military sources report the presence of several terrorists equipped with explosive vests inside this vehicle.

The information has not been officially confirmed by the US Department of Defense, says our correspondent in New York,

But the Pentagon reports secondary explosions after the strike, proof of the presence of a significant amount of explosive material.

Very early this Sunday morning, the American embassy in Kabul had alerted to a specific and credible threat and asked its nationals to immediately leave the airport area. The day before, Joe Biden had warned that a new Islamist attack was "

" on the airport within 24 to 36 hours after Thursday's attack near Kabul airport, claimed by IS-K and which killed more than a hundred, including 13 American soldiers. The American embassy in Kabul had urged all Americans to leave the vicinity of the airport "

because of a specific and credible threat

In any case, the United States is keeping its promise.

This is the second drone strike carried out by Washington since the attack on Thursday.

And Joe Biden warned: his country will continue to hunt down anyone involved in the attack.

Three days after the

claimed by the Islamic State organization, Joe Biden solemnly received on Sunday at a military base in Dover in Delaware (northeast) the remains of the 13 American soldiers killed. This military base on the east coast of the United States, about two hours from Washington, has been synonymous in American minds for decades with the heartbreaking return of fallen servicemen, their remains covered with the American flag.

The Pentagon had published on Saturday afternoon the identity of the 13 soldiers killed in the attack on Thursday. Five of them were 20 years old, the length of America's longest war, launched in 2001 in Afghanistan. Also among the victims is a 23-year-old young woman who had been photographed a week earlier with a baby in her arms during the chaotic evacuation operations at Kabul airport.

for his management of the Afghan crisis.

Despite everything, the American president has pledged to respect the deadline for the airlift.

of foreigners and Afghans fleeing the new Taliban regime entered their final phase at Kabul airport on Sunday before the American withdrawal.

No more than 300 Americans remain to be evacuated from Afghanistan, Secretary of State Antony Blinken said on Sunday.

See also: Afghanistan: London and Paris plead for a protected area in Kabul