Three rounds of heavy rainfall in Henan in 40 days! Why is there so much rain this year?

Chinanews client, Beijing, August 26 (Reporter Lang Lang) The last round of heavy precipitation has just gone, and now another round of precipitation is going on across the country.   From August 25th to 27th, in addition to the rain in Jiangnan, Huanghuai and other places, northern China, Northeast China, Inner Mongolia and other places will also experience moderate to heavy rain, local or acc 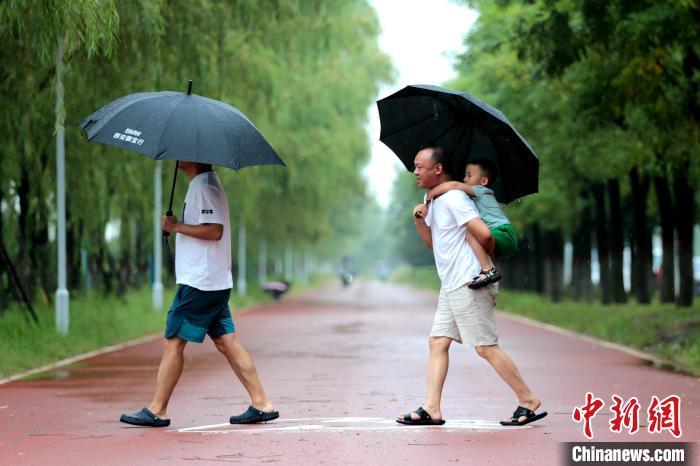 Chinanews client, Beijing, August 26 (Reporter Lang Lang) The last round of heavy precipitation has just gone, and now another round of precipitation is going on across the country.

From August 25th to 27th, in addition to the rain in Jiangnan, Huanghuai and other places, northern China, Northeast China, Inner Mongolia and other places will also experience moderate to heavy rain, local or accompanied by strong convective weather such as thunderstorms and hail, Henan also Ushered in the third heavy rain in 40 days.

Many people have doubts whether this year's climate background is abnormal?

Why is there so much rain in the north?

1. Is there more rain in the north?

"Since the beginning of summer, as of August 24, except for the eastern part of Northeast China and the western part of North China, most areas north of the Yangtze River in eastern my country have had more precipitation than normal." Gu Wei said.

2. Why is it raining more in the north?

——Related to the "La Nina" phenomenon

Although more precipitation is not uncommon, Gu Wei concluded that this year's rainy season in North China has the characteristics of an early start, a late end, a longer rainy period, and a larger total rainfall.

On average, the rainy season in North China starts on July 6 and ends on August 18.

The rainy season this year began on July 12 and has not yet ended.

"A'La Nina' event occurred in the tropical Central and Eastern Pacific from August 2020 to March 2021. This summer, the more precipitation in North China and the longer rainy season are related to this'La Nina' event."

According to Gu Wei, studies have shown that the "La Niña" event will have a lagging effect on the Indian Ocean sea temperature and atmosphere, making the Northwest Pacific subtropical high in summer and the East Asian summer monsoon stronger, which will lead to more water vapor transport to northern China, which is beneficial to In North China, there is more precipitation, the rainy season starts earlier, and the rainy season is longer.

Data map: Recently, the water level of many rivers in Jilin Province has risen.

3. Is excessive precipitation in the north a sign of abnormal climate?

Some people worry that the rain in the north is so much, is it an anomaly?

In this regard, Gu Wei said that in fact, this year's rain in the north is not so special, and it has happened in the past.

During the 1960s and 1970s, rainy conditions were more common in the north. For example, the precipitation in the Beijing-Tianjin-Hebei region during the summer of 1977 reached 532.7 mm, and in 1963 it was 512.9 mm, the first and second highest respectively since records.

4. Will there be frequent precipitation in the north next?

——Significantly less than the previous period

At present, the rainy season in the north has not yet ended. Will there be frequent rainfall in the later period?

Gu Wei said that the rainy season in North China is expected to end from the end of August to the beginning of September. After September, there will still be more obvious precipitation processes in North China, but it is definitely a decreasing trend compared to July and August.

Data map: After the heavy rain in Zhengzhou on July 20, citizens waded through the streets.

5. Is my country's rain this year more, more frequent and more extreme than in the past?

"Why is there so much rain this year?" This is a question of many people.

Gu Wei said that since the summer, from the national average, the rainfall is basically the same as the multi-year average.

However, the precipitation in different regions is different, and the regional distribution is uneven.

For example, in northern areas such as Beijing, Tianjin, Hebei, and Henan, the precipitation process is significantly higher than the average for many years, and the rainfall is also large.

But there are also some areas, such as Guangdong and Guangxi, where the precipitation is obviously low.

However, from an extreme point of view, this year is indeed a more prominent year.

In particular, the record-breaking extreme heavy precipitation event in Henan in July, the hourly rain intensity, daily precipitation, and the intensity of the precipitation process all exceeded historical extremes, and the extremes were quite prominent.

6. Will frequent record-breaking of climate data become the norm?

-May become the new normal

The prediction of extreme weather and climate events is generally very difficult.

Sometimes it is found in the summary that there is a big deviation between the actual situation and the forecast.

And this deviation is often caused by one or two extreme weather events.

This is because the predictability of extreme events is relatively small, and signals often appear when they are very close. It is generally difficult to grasp such signals in mid- and long-term climate predictions.

"Prediction of extreme events is difficult at home and abroad." Gu Wei said that future forecasts need to work hard to understand the new laws under the new normal, strengthen research on the causes and forecasting methods of extreme events; at the same time, strengthen scientific propaganda and improve society. Awareness and ability to defend against extreme weather events.

Improve the awareness and ability of risk avoidance.

7. There are more sandstorms in spring and more rain in summer. Is this a year with abnormal climate?

——This statement is inappropriate

"It is not suitable to say that this year's climate is'abnormal', because every season has abnormal climate characteristics. For example, the abnormally high precipitation in the Yangtze River basin last summer was very obvious." Gu Wei said.

The anomaly in the meteorological sense is compared with the 30-year average data.

As far as the whole country is concerned, in fact, every month or every season has its abnormal characteristics, and no season or month appears completely on average.

However, this year’s climate has an obvious feature, with a relatively large intra-season variability.

However, Gu Wei said that there are many years in history that have such characteristics.