"Many say that the suicide bomber was spotted in the crowd": what is known about the explosions near the airport in Kabul

As a result of several explosions near the airport in Kabul, according to various information, from 70 to 90 people were killed, more than 150 were injured. According to media reports, the Islamic State * claimed responsibility for the attack in the Afghan capital. The Pentagon has confirmed that there are at least 12 American soldiers among the dead. A resident of Afghanistan told RT that thousands of people had accumulated near the airport, and the terrorist attack took place in the most crowded part of the city. RT correspondent Murad Gazdiev said that after the explosions, "the activity of NATO fighters has greatly increased." A Taliban spokesman * said foreign troops were responsible for the safety of the citizens at the Kabul airport. In turn, US President Joe Biden, commenting on the incident, said that “he is fully responsible for everythingwhat has happened recently. " 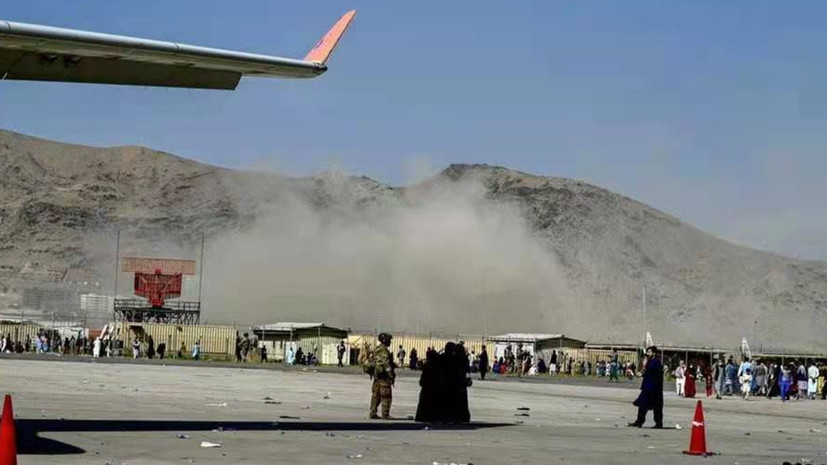 Explosions thundered near the Kabul airport.

As a result of these events, according to various media reports, from 70 to 90 people died, more than 150 were injured.

It is reported that the Islamic State * organization claimed responsibility for the incident.

The Pentagon said that the explosion killed 12 American troops, and injured 15 more.

General Kenneth Mackenzie, head of the US Central Command, spoke about this during a briefing.

According to him, the explosions occurred at the northern gate of the airport and near the Baron Hotel, also located near the Kabul airport.

According to him, the explosion at the gate was followed by shelling from the militants.

Later, the media reported on several more explosions that were heard in the Afghan capital.

Taliban officials ** later said that some of the bombings that followed were controlled.

According to representatives of the movement, in this way the US military destroyed their equipment.

Shortly before the Pentagon released information on the losses, the Associated Press reported that the explosion killed 11 US Marines and one military doctor.

"I am fully responsible"

Against the backdrop of the bombings in Afghanistan, US President Joe Biden made an address.

According to American intelligence, the terrorist attack in Kabul was organized by the Islamic State in Khorasan militants.

“According to intelligence estimates, a group known as IS in Khorasan carried out an attack that claimed the lives of American troops guarding the airport and severely injured several others,” Biden said during a White House news conference.

He stated that he instructed to prepare operational strikes on the positions of the "Islamic State".

He also ruled out the possibility of Taliban assistance to IS militants.

Commenting on the prospects for the further removal of people from Afghanistan, Biden said that the United States will continue to evacuate, despite the terrorist attacks.

According to him, “unless something extraordinary happens,” the United States will leave Afghanistan by August 31.

Answering journalists' questions, he also said that he is responsible for the events of recent weeks in this country.

“I am fully responsible for everything that has happened recently,” he said.

"Thousands of people gathered around the airport"

A resident of Kabul, Maxim (name has been changed), told RT about the situation in the city after the explosions.

According to him, thousands of people gathered in the area of ​​the airport in Kabul.

“There were a lot of people there, thousands of people gathered around the airport - there's just nowhere for an apple to fall, there’s a crush.

They chose the most crowded place there.

People who worked with NATO, the Americans, the British, now they are not called straight to the airport, several families are called to other places, they are put on a bus and are already brought directly to the airport so that people do not pass through the crush, ”the source said. RT.

Meanwhile, Taliban spokesman Mohammad Naim told RT Arabic that the movement warned foreign troops and citizens of the possibility of security problems in the vicinity of the airport due to the presence of thousands of people there.

According to him, foreign troops are responsible for the safety of everyone at the Kabul airport and its environs.

According to him, after the events at the airport, "the activity of NATO aircraft has increased greatly."

“Taliban cars are still driving, police, as well as ambulances, sirens have sounded a lot since two explosions at the airport - one in the northern part of the airport near the checkpoint, where the Americans were right at the exit ... they say that the suicide bomber was spotted in the crowd when he was moving in the direction of the checkpoint, ”Gazdiev said.

Earlier, the Minister of Information of the Taliban Zabihullah Mujahid said that the NATO countries received information about the threat of a terrorist attack from the militants of the Islamic State * at the airport in Kabul from the Taliban.

He said the threat was "small and vague," but there is a likelihood of a provocation with the killing of people to denigrate the Taliban.

In an interview with Russian journalists, the Taliban information minister also stated that the Taliban intend to prevent terrorists from using Afghanistan as their base.

On August 24, US President Joe Biden noted the "growing" threat of an attack from the Vilayat Khorasan terrorist group.

Later, The New York Times, citing a White House source, reported the discovery of traces of a "specific" and "credible" threat from IS.

Against the background of this situation, the American Embassy in Afghanistan urged its citizens not to come to the Kabul airport, because it is unsafe, to find shelter and wait for further instructions.

Meanwhile, the US military calls the operation in Afghanistan a disaster.

This opinion, in particular, was expressed by Gabriel Martinez, who fought in Afghanistan.

In his opinion, the situation was worse than the fall of Saigon at the end of the Vietnam War in 1975.

“All my fellow veterans with whom I keep in touch feel disappointed, they feel let down.

Everyone, of course, blames Biden - and with good reason.

After all, this is a disaster - larger than the fall of Saigon.

At the time of the fall of Saigon, of course, I was not yet born, but what we see now is very serious.

This is a global failure, "Martinez said in an interview with RT.

According to him, the current situation has demonstrated a complete lack of political will on the part of the US leadership.

“As for the lessons learned, if the past wars - Vietnam, Iraq at the beginning of the 2000s - did not teach us anything, we will continue to step on the same rake.

And it is not we who profit from this, but the military-industrial complex.

We are simply being used to please the military-industrial complex, ”concluded Martinez.

** "Taliban" - the organization was recognized as terrorist by the decision of the Supreme Court of the Russian Federation dated 02.14.2003.