Teresa Ribera and López Miras, willing to work together in a bilateral commission of the Mar Menor 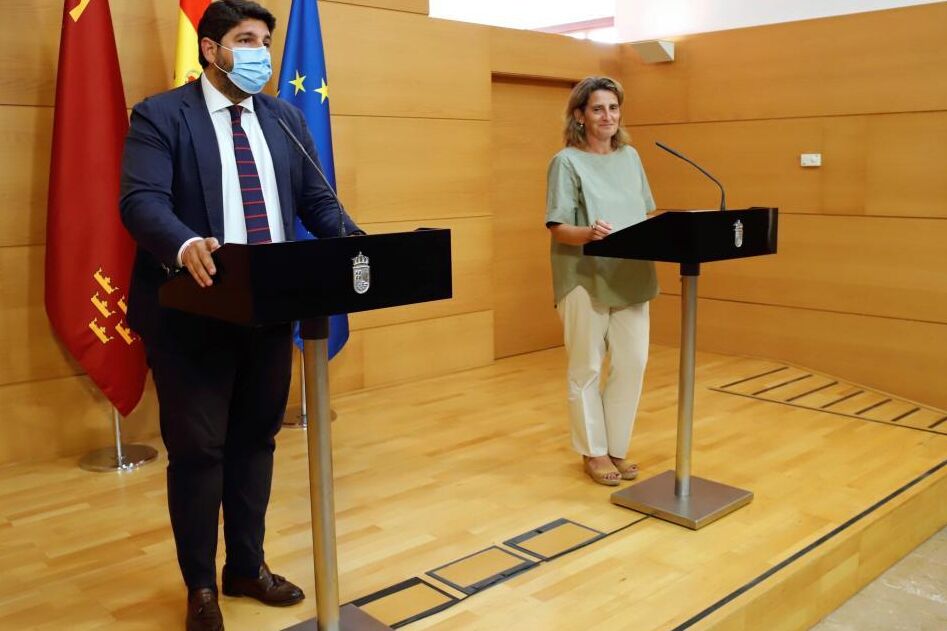 The Minister for the Ecological Transition and Third Vice President of the Government,

, and the President of the Murcia Region,

, have shown themselves willing to put their differences behind and work together, as has been revealed by the highest authority of the autonomous community after the meeting held about the environmental crisis in which the Mar Menor has been for a week and a half.

At the meeting, which took place in the Palacio de San Esteban

in a "cordial" climate

, according to sources from the López Miras Executive, it was agreed to create a bilateral commission to periodically evaluate the information collected by both administrations and prevent future crisis in the area.

Ribera has also committed to studying the local proposal to recover part of the draft of the Marchamalo gorge - the channel that connects the Mar Menor with the Mediterranean - to oxygenate the southern basin of the lagoon, the area most affected this summer.

"We have explained that it would be a punctual, reversible and monitored action," they point out from the regional government

. The minister will rely on the scientific reports of the Spanish Institute of Oceanography before giving the green light to any action.

President López Miras has asked why the water supply is not immediately cut off when the Segura Hydrographic Confederation (CHS) detects illegal irrigation.

Ribera has argued that the process is complex

, it requires informing the irrigation communities and preserving public law.

It has been in favor of prioritizing a series of measures (specifically, 5, 6 and 9) of the Plan 'Dumping 0'.

Basically, these measures consist of the extraction of water from the aquifer on which the Murcian lagoon rests, which is responsible for much of the environmental problem as it is contaminated with nitrates and seeps through the subsoil or through spills from the Rambla del Alpujón.

In turn, the minister has authorized the autonomous Executive to draft the

environmental impact assessment and the execution of the works of the north collector and the denitrification plant.

This would make it possible to extract all the water from the aforementioned Rambla, eliminate the nitrates and treat it in the optimal conditions to be able to pour it.

by illegal irrigation are being processed by the Ministry of Agriculture

, rejecting the recent accusations of the spokesman minister, Isabel Rodríguez, that part of them they were paralyzed.

"There has been a dance of figures that is going to take place at a technical level," the same sources point out.

With regard to the possibility of applying sanctions, the regional government alleges that it is a matter for the Confederation,

but it has promised to act "at source

In fact, it has announced the processing of a decree to prohibit nitrogen fertilizers in the area closest to the lagoon, a decree that is intended to be approved this Thursday or the next in the Governing Council.

The minister has valued this measure "positively".

will translate into commitments

. Here we have an environmental emergency and the Government of Spain is in no hurry to resolve it," they point out from the Palacio de San Esteban.

PoliticsMargarita Robles assures that she does not know very well "what is that of motherland", the term that Yolanda Díaz coined