Current Affairs News Eyes丨General Secretary Xi Jinping's Trip to Chengde Viewed from Three Groups of Key Words   On August 23 and 24, General Secretary Xi Jinping inspected Chengde, Hebei. This was his 9th domestic inspection this year. From the miraculous Saihanba, to the world-famous cultural heritage, to the village communities where Zhiyeguanqing is concerned, the general secretary has come 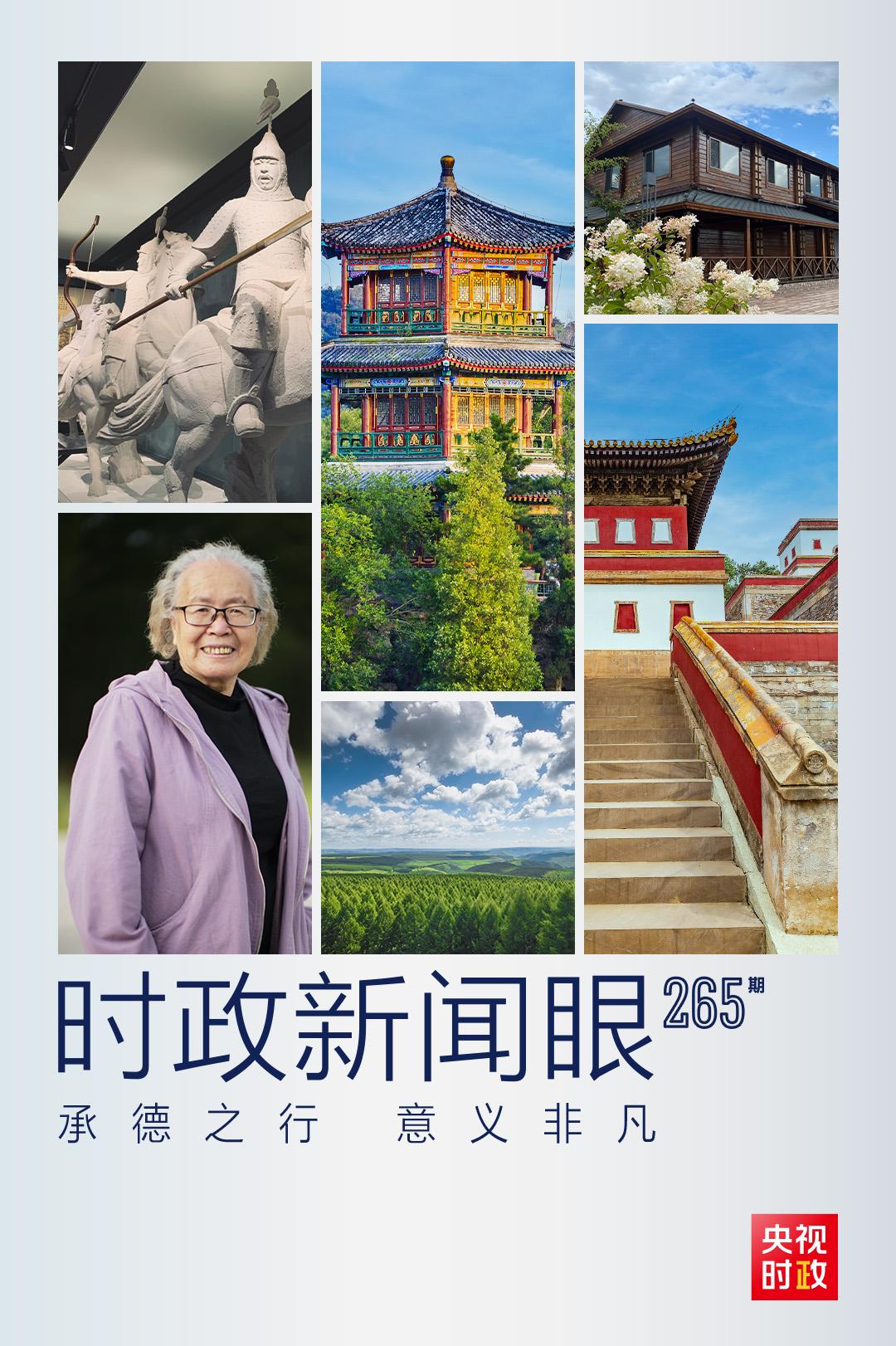 On August 23 and 24, General Secretary Xi Jinping inspected Chengde, Hebei. This was his 9th domestic inspection this year.

From the miraculous Saihanba, to the world-famous cultural heritage, to the village communities where Zhiyeguanqing is concerned, the general secretary has come all the way.

Through the three sets of keywords, you can understand the profound meaning of this trip.

△Schematic diagram of the inspection site on August 23

From "Year" to "Today": Changes in Saihanba

At the beginning of 2016, General Secretary Xi Jinping gave such an example at the provincial and ministerial seminars: "The paddock in northern Hebei had a vast sea of ​​trees and abundant water and grass in the early years, but since the Tongzhi period, the pine forest was almost completely wiped out. , Hundreds of thousands of acres of barren hills and bald ridges have appeared. We must earnestly learn these profound lessons."

More than a year later, the general secretary said in an important instruction for the touching deeds of forest farm builders, "Their deeds are touching and they are a vivid example of promoting the construction of ecological civilization."

The profound lessons in history and today’s vivid examples all point to the same place-Saihanba.

Saihanba, which means "beautiful high mountain", was once an important part of the Mulan Paddock of the Royal Hunting Garden in the Qing Dynasty.

Since the 1960s, three generations of Saihanba people have written the miracle of the wasteland turned into a sea of ​​forests and built the world's largest planted forest farm.

△Larch in Saihanba covers an area of ​​680,000 mu, which is the largest tree species.

On the afternoon of August 23, Xi Jinping came to Saihanba Mechanical Forest Farm.

Fire defense is a safety line of defense for forest protection.

In Saihanba Mechanical Forest Farm, there are a total of 9 small buildings called "Wanghailou" for watching the forest and the sea and watching the fire.

Liu Jun and Wang Juan are the forest guards and fire protection watchers of the "Wanghailou" of Moon Mountain.

△The camera recorded the moment when Liu Jun and his wife looked at each other and smiled.

Liu Jun said that the forest farm watchers use binoculars to observe the surrounding area every 15 minutes during the day, record the weather, wind, and whether there is a fire, and report it to the duty room.

At night, it is reported every hour, every day.

The loneliness of the watch was exchanged for decades of "zero fire" in the forest farm.

Saihanba, a land with an altitude of 1010 to 1939.9 meters, is a beautiful mountain and a spiritual highland.

(Photographed by Li Jin, a reporter from China Broadcasting Corporation)

In the afternoon of the same day, Xi Jinping came to Shanghai Memorial Forest.

This is the birthplace of the spirit of Saihanba.

This piece of woodland commemorates Wang Shanghai, the first party secretary of the forest farm.

At the beginning of the establishment of the site, Wang Shanghai led the staff to explore and summarize the all-light seedling cultivation technology in the alpine region, creating a precedent for mechanical planting of coniferous forests in China.

△ After Wang Shanghai died, the forest farm followed his wishes and scattered his ashes here.

In Saihanba, there is still a story of "six women on the dam".

In 1964, after discussing with the five sisters in the dormitory, Chen Yanxian, who was studying in Chengde high school, decided to abandon the college entrance examination and rushed to the forest farm.

Chen Yanxian, now an old man in his seventies, enjoys returning to the forest farm.

The vicissitudes of life from the past to the present, the unending spiritual power.

On the same day, the general secretary said in an exchange with representatives of the forest farm workers that the Saihanba spirit is an integral part of the spiritual pedigree of the Communist Party of China.

The whole party and the people of the whole country must carry forward this spirit and develop a green economy and ecological civilization.

From "Outside" to "Inside": Chengde's "Inheritance"

△A schematic diagram of the inspection site on August 24

The Mulan Paddock of the Royal Hunting Garden in the Qing Dynasty was more than 350 kilometers away from Beijing.

In the winter of 1701, when Emperor Kangxi was passing through the Wulie River Valley, he was shocked by the sparsely populated area and beautiful scenery. It was in the middle of Beijing and the paddock. This opens up a garden and builds a palace.

The Mountain Resort was once the second political center of the Qing Dynasty. The Qing emperor handled important military and political affairs here, and received political and religious leaders of border ethnic minorities and foreign envoys.

Around the Mountain Resort, there are 12 temples, 8 of which are directly managed by the Qing government. Because they are located outside the Great Wall, they are called Chengde Outer Eight Temples.

In 1755, after the Qing army put down the Mongolian Junggar rebellion, Qianlong built the Puning Temple in accordance with the Sangyuan Temple in Tibet.

It became the main place for direct contact between the Tibetan and Mongolian tribes and the Qing government in religious and political aspects.

△Puning Temple means that all ethnic groups across the country live in peace and enjoy their jobs.

The museum is located in the northeastern part of the Mountain Resort. From November 2019, the exhibition "Inside and Outside of the Great Wall-Records of National Unity in Qing Dynasty" will be exhibited in the museum.

In order to welcome the Sixth Panchen Lama to Chengde for the pilgrimage, Emperor Qianlong issued an decree to build the temple of Sumi Fushou and move this cultural relic here.

In addition to the summer resorts built in the Qing Dynasty, there was another more important reason, which was border defense.

The emperor of the Qing Dynasty abandoned the Great Wall, a fortification that had been in use for thousands of years.

The reason is simple: "The ancient and Qin Dynasty built the Great Wall with the help of the earth and stone. I gave Khalkha (referring to the Mongolian tribes) to protect it from the future and make the longer city stronger." It became the emperor of the Qing Dynasty. A place for fraternal races to talk and feast.

Chengde Mountain Resort and surrounding temples are important historical witnesses to the formation of a unified multi-ethnic nation in China.

"To unite the hearts of the inside and the outside, and become a solid industry." The boundary between inside and outside the Great Wall was broken.

General Secretary Xi Jinping once pointed out that “the pluralism and unity of the Chinese nation is a rich heritage left to us by our ancestors, and it is also a huge advantage for our country’s development.” Inheriting a rich heritage and promoting national unity is the “heritage” of Chengde.

From "township" to "city": the road to common prosperity

In recent years, Daguikou Village has relied on Lianhua Mountain and other natural resources to vigorously develop tourism. At the same time, it has built agricultural greenhouses and cultivated new formats such as leisure picking and agricultural research, which has driven the average annual income of households to increase by 50,000 yuan.

The "Valley Bazaar" set up by the local ingeniously relies on the "entity + e-commerce" sales model to sell nearly a hundred kinds of special agricultural and sideline products in the village.

The 68-year-old Hawking family is a large family with 11 family members.

The two sons are working outside, and the Hawking couple and their two daughter-in-laws run strawberry and cucumber greenhouses, which are typical of the village's wealth.

In the first half of this year alone, the family's income exceeded 100,000 yuan.

The home care service center in Binhe Community intends to build a "nursing home without walls", enter the information of the elderly into the intelligent software system, and realize cleaning, mobility, medical assistance, meals, and emergency assistance through the "one-click call". Wait for home service.

The community and volunteers are the "central nervous system" of this service platform.

Villages and communities are the "cells" of Chinese society.

At the end of 2012, General Secretary Xi Jinping went to Luotuowan Village and Gujiatai Village in Fuping County to inspect poverty alleviation and development work.

Since then, he has visited Tayuanzhuang Village in Zhengding County and Desheng Village in Zhangbei County in Hebei. The focus of the investigation has gradually shifted from poverty alleviation to rural revitalization.

During an inspection in Tangshan in July 2016, the general secretary visited the Xiangfuli community.

The way to govern the country starts with enriching the people.

Just last week, General Secretary Xi Jinping presided over the tenth meeting of the Central Committee of Finance and Economics. One of the key topics was to study the issue of solidly promoting common prosperity.

The general secretary emphasized the need to promote common prosperity in high-quality development.

From improving the pension and medical security system to promoting the common prosperity of farmers and rural areas, it is not only a topic at the conference, but also a concern of the general secretary during this trip.