Government towards the extension of the Green pass to one year. The bioethical consultation: yes to the vaccination obligation. Figliuolo: by the end of September 80% covered. 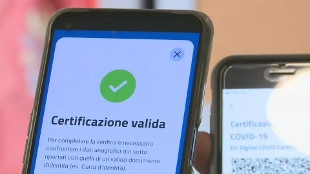 25 August 2021 Today another 5.3 million vaccines will arrive in our country - between pfizer and modern doses - and the extraordinary commissioner Figliuolo assures that 80% of the vaccinated population will be reached by 30 September. And precisely in view of this goal, open days are multiplying.

After the physiological decline, due to the summer break of the two weeks at the turn of August, the pace of vaccinations is back to running. With an increase in the first doses administered last Monday by 45% in a single day. And so from the beginning of the campaign, 75,622,961 administrations have been reached, equal to over 67.6% of the population over 12 protected from the effects of covid, (36.5 million vaccinated).

The CTS will examine on Friday the request to extend the duration of the Green pass from 9 months to one year. Speranza is convinced that he will say yes and believes that the third dose will be made starting from the most fragile: immunosuppressed, transplanted and over 80.

New infections (6,076), victims (60), intensive care and hospitalizations are on the rise.

From the Council of Bioethics yes to the obligation to vaccinate, at least for those who carry out public services.

On 6 September the discussion for the conversion into law of the decree on the Green pass will begin in Parliament and if the go-ahead from the CTS arrives, there could be an extension of the duration of the certificate from the current 9 to 12 months. The topic has been on the ministry table for days and the committee of experts should speak within days. The hypothesis is 12 months is also evaluated in view of the third dose of the vaccine and also responds to the requests of doctors who envisaged in the coming months the possibility that many colleagues, vaccinated at the beginning of the year, could be discovered. The Councilor for Health of the Lazio Region, Alessio D'Amato, also intervened on the matter. "I am in favor of extending the Green pass to 12 months, but it must be a national choice," said Zingaretti's commissioner.