Perhaps no one is more shocked by the disaster in Afghanistan than the people of Iraq, as many Iraqis believe their country may face a fate similar to what happened there, even before the US withdrawal turns into a complete collapse of the Afghan state and the Taliban's seizure of power. was Iraqi 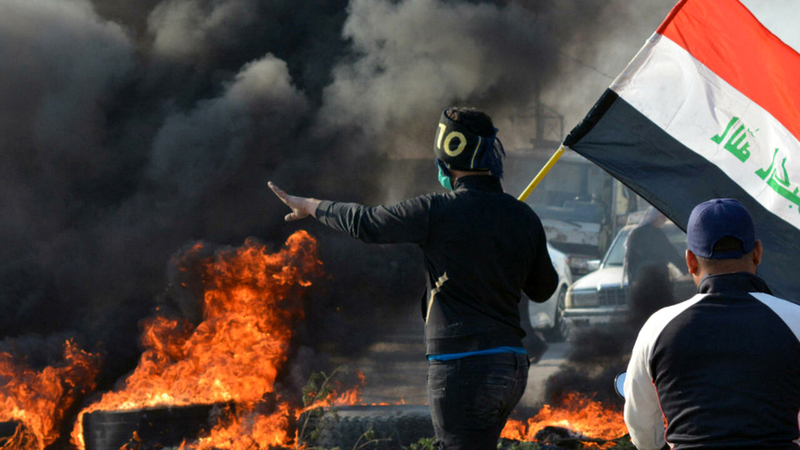 After the fall of the Afghan government following the American withdrawal

Perhaps no one is more shocked by the disaster in Afghanistan than the people of Iraq, as many Iraqis believe their country may face a fate similar to what happened there, even before the US withdrawal turns into a complete collapse of the Afghan state and the Taliban's seizure of power.

Several Iraqis I spoke to during a visit there in July and August were concerned about what an imminent US withdrawal from Iraq might mean, and were wondering: Will the United States end its presence in Iraq as well by withdrawing its 2,500 soldiers?

And if so, will this lead to a power grab by pro-Iranian militias, a resurgence of ISIS, or a civil war?

The desperate scenes at Kabul airport on Sunday raised feelings of fear and anxiety among Iraqis, and reminded them of that moment of the fleeing of the Iraqi army and police trained by the United States in 2014 in front of the "ISIS" organization, which occupied three provinces.

The United States withdrew in 2011 but was forced to return to Iraq to halt the ISIS offensive.

The Iraqis also fear the renewed debate in Washington and Baghdad regarding the complete US withdrawal from Iraq.

As in 2011, Iran is pressuring the Iraqi government to withdraw US forces, and Washington may now be more willing to withdraw than before.

There are many similarities between Iraq and Afghanistan;

Iraq, like Afghanistan, has a divided government that prioritizes patronage politics over the governance of competent security forces and other government services.

As in Afghanistan, neither the Iraqi government nor the army is willing to stand up to the unruly militias that threaten Iraq's sovereignty and stability and attack Iraqis. Likewise in Afghanistan, in Iraq it is not a matter of ability but of political will, where US officials complain that Baghdad is taking command of the region's number one counterterrorism apparatus, but is only deploying it against ISIS, not against other militias loyal to Iran. . Like the Taliban, these thug militias, despite popular and international pressure, are patiently striving for power.

Many also fear that the extensive debate about the withdrawal in Baghdad, which Iran has been promoting, will find acceptance in Washington, not least because the team (Democrats) who withdrew from Iraq in 2011 has returned to the White House. Iraqis worry that the administration of President Joe Biden may coexist with an Iraqi government led by militias if these militias stop their attacks on American interests. Many Iraqis fear the repercussions of the US administration's deadline to withdraw its combat forces from Iraq by the end of 2021. It is certain that Washington's changing priorities and the hardship it has suffered from Iraq does not reflect a partisan position, as it was the administration of former President Donald Trump that threatened to close the American embassy In Baghdad after an increase in militia attacks on US military and diplomatic staff.Moreover, Washington's political vicissitudes are baffling its friends and partners in Iraq, many of whom have begun searching for alternative regional patrons in order to counter Tehran's growing influence.

Despite these real and perceived similarities between Iraq and Afghanistan, Iraq is of course a completely different country, which gives it a chance to avoid the fate of Afghanistan.

Unlike Afghanistan, Iraq has a history of strong national institutions, and there is bipartisan support for continuing the American path in Iraq, leading the anti-ISIS coalition to prevent the terrorist group from re-emerging, and strengthening economic ties.

America will not ignore the threat

Moreover, the United States cannot ignore the threat that Iran's expansionist agenda in Iraq poses to the region.

Regardless of U.S. interests, Iraq has a better chance of curbing militia rule given domestic opposition to Iranian influence — including the popular protest movement — and Iraqi Shiite leaders in Najaf who fear losing their religious authority in Iraq’s Najaf to the religious figures of Iran’s Qom, and the leaders of Kurdistan Who fear that they will be the next target of the militias after the Sunni provinces.

Unlike the Taliban, the various Iraqi militias lack unified leadership and popular acceptance.

Moreover, the success of the US mission against ISIS and Al-Qaeda in Syria depends on the US presence in Iraq.

However, Iraq can go the way of Afghanistan unless Iraq and the United States adjust their relationship. The first thing in this regard is to work on maintaining and diversifying the anti-terror relationship in accordance with the US commitments in Iraq. As long as US-Iraqi relations depend solely on the number of US military personnel, Iran and its proxies will aspire to end the relationship by forcing those forces to withdraw. The militias have used their resources and will continue their attacks on the American presence, knowing that the United States lacks patience and deterrence.

In order for the US-Iraqi relationship to go on the right path, the two parties should turn to investing in building the military and institutional capabilities of the Iraqi security forces, to combat terrorism and for other purposes, and the ability, not the timetable, should be the criterion for progress.

Moreover, to maintain such a mission, the US presence in Iraq must be depoliticized, and Washington must make clear that changing its military presence in Iraq to one of advising and assisting will not mean abandoning Iraq.

Crucially, the Iraqi people need to feel the benefits of this relationship in areas such as trade, healthcare and education.

A series of US-Iraqi strategic dialogues sought to reach such a goal.

Iraqis may find solace that Biden appears unwilling to see a similar picture at Baghdad International Airport to the one we saw at Kabul Airport, yet US priorities are already shifting away from the greater Middle East, and the burden is first and foremost on the Iraqi government to bear Responsibility and investment in a strong relationship with the United States, because the fight against terrorism alone will not maintain such a relationship, and the messages of the United States must be clear: The transition of its mission from a combat role to an advisory role does not mean the United States withdrawing from its obligations towards Iraq, or abandoning The campaign against ISIS.

Having seen what happened in Afghanistan, Iraqi leaders may believe that the United States has become an unreliable partner, yet seeking to replace it with other patrons - be it Iran, Turkey, or another country - will only deepen Iraq's dependence on unreliable partners, and instead Hence, Iraqis must strive for government reform.

Finally, the disaster in Afghanistan is a reminder that Washington, Baghdad, and Erbil must recognize the pervasive corruption in Iraq as a real challenge to national security, not just a negative side effect of the democratic transition;

Therefore, Washington should demand accountability for the money and equipment it provides to the Iraqi Security Forces and the Kurdish Peshmerga forces.

• The desperate scenes at Kabul airport, on Sunday, aroused feelings of fear and anxiety among Iraqis, and reminded them of that moment of the escape of the Iraqi army and police trained by the United States, in 2014, in front of the "ISIS" organization, which occupied three provinces.

• As was the case in Afghanistan, neither the Iraqi government nor the army is willing to stand up to the unruly militias that threaten Iraq's sovereignty and stability and attack Iraqis.