More than 500 billion rubles: the Russian Defense Ministry signed more than 40 contracts during the Army forum

During the Army Forum, the Russian Defense Ministry signed more than 40 contracts for a total of 500 billion rubles. According to the deputy head of the department Alexei Krivoruchko, within the framework of these agreements, the ministry will receive over 1.3 thousand samples of equipment. Within the framework of the agreements signed, more than 150 pieces of weapons and equipment will be repaired and modernized. Earlier, Vladimir Putin said that the samples of Russian weapons demonstrated at the forum have no analogues in the world. 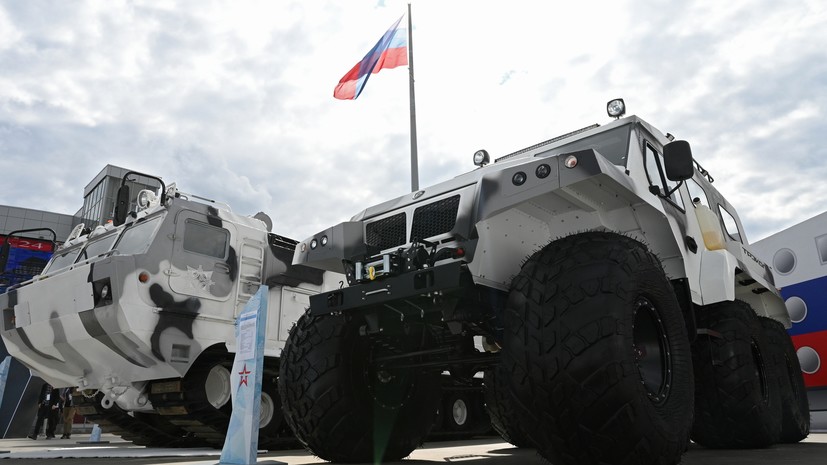 Deputy Defense Minister Alexei Krivoruchko said that during the Army forum, the department signed more than 40 contracts for a total of 500 billion rubles.

“Today, four were awarded and 41 state contracts were signed with 27 enterprises of the military-industrial complex worth more than 500 billion rubles,” TASS quotes Krivoruchko.

According to him, within the framework of these contracts, the Ministry of Defense will receive more than 1.3 thousand samples of equipment.

Also, over 150 weapons, as well as military and special equipment will be repaired and modernized.

Thus, the Russian Defense Ministry signed a contract with NPO Mashinostroyenia for the supply of Zircon hypersonic missiles.

“A state contract has been signed for the supply of the 3M22 rocket (Zircon. -

During the International Military-Technical Forum, the contract was awarded to General Director of NPO Mashinostroyenia Alexander Leonov, ”the ministry said.

New shipments of the Dagger hypersonic missiles have been ordered for the Russian Aerospace Forces.

Along with this, the department ordered the modernization of the MiG-31K aircraft carrying the "Daggers" and the upgrade of the next batch of MiG-31 interceptors to the level of the MiG-31BM.

In addition, an agreement was signed for the supply of 30 Ka-52M attack helicopters, which are a modernized version of the Ka-52 Alligator model.

Also, contracts were signed for the supply of modernized strategic bombers Tu-95MSM.

It is expected that as part of the upgrade, the machines will receive new control and radar systems, flight and navigation equipment and a communications complex.

Also on russian.rt.com 63 defense industry companies from the Moscow region took part in the Army-2021 forum

Among other things, the Tu-160M ​​strategic bombers will receive eight NK-32 engines of the second series.

In addition, a state contract was signed for the supply of complexes with unmanned aerial vehicles "Platform" and "Termit", as well as a contract for the supply to the armed forces of self-propelled artillery units (ACS) "Coalition-SV", created on the platform of the T-90 tank and equipped a 152 mm gun.

Along with this, the Ministry of Defense signed another contract for the supply of long-range sea-based cruise missiles "Caliber", as well as an agreement for the supply of the strike drone "Pacer-RU", which was tested during the fighting in Syria.

During the meeting of Vladimir Putin with representatives of the United Russia party, he noted that today the Russian army is armed with 71% of modern weapons.

“You have issued an instruction to diversify the military-industrial complex with the understanding that the defense order will gradually decrease.

And the modern army today already has more than 71% of modern weapons.

We have today the serviceability of weapons at 99%, ”Shoigu said to the president.

We add that at the opening of the Army-2021 forum and the International Army Games, Vladimir Putin spoke about the uniqueness of Russian weapons.

The head of state stressed that some samples have no analogues in the world.

"Many of these weapons have no analogues in the world in terms of their tactical and technical characteristics, and according to some samples it can be said for a long time that they will not have it for a long time," the president said.

Putin also noted the constant modernization of the armed forces, citing the example of the update in the strategic nuclear forces (SNF).

“The share of modern weapons in the strategic nuclear forces already exceeds 80%.

This is more than in other nuclear countries in the world.

It is clear that this is not relevant for everyone, but it is important for us and shows the level of development of our armed forces and the capabilities of our science and technology, ”the Russian President noted.

The President also stressed that the Russian military-industrial complex and the armed forces are developing on a new technological basis.

“Therefore, we will pay considerable attention at the forum to such areas as the use of artificial intelligence and robotics in the troops, the latest communication and control systems,” Putin said.

In general, as Putin noted at the opening ceremony of the Army-2021 forum, “Russia has much to be proud of, what to offer allies and partners” in the field of the military-industrial complex.

According to him, Russian enterprises and defense industry organizations that fulfill the state defense order of the Russian Federation reliably ensure the supply of weapons and equipment not only for the domestic army and navy, but also "are ready for international cooperation in the development and production of modern weapons."