The night before Tuesday, Luleå kayak club's goal house burned to the ground. The club chairman suspects that the fire was started and has now made a police report. 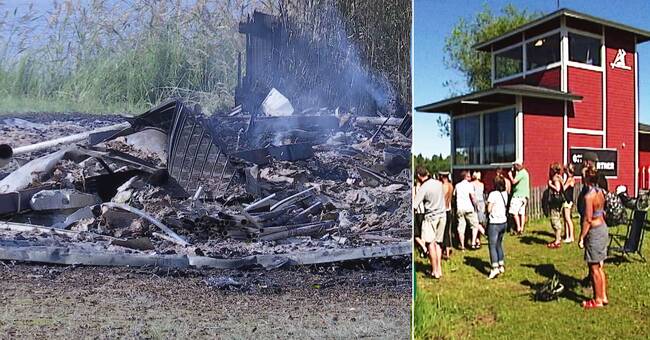 At three o'clock, the night before Tuesday, the alarm came and two hours later the kayak club's finish house had burned to the ground.

The rescue service had to concentrate on the fire not spreading.

- We received an alarm about a grass fire, but it developed into a full-scale fire in a building and there is not much left now.

According to Luleå Kayak Club's chairman Viktor Ek, ​​Tuesday was a sad day for the association when the more than 25-year-old finish house at Lulsundsbadet, which is mainly used for competitions, burned down.

We used that building sporadically, mainly at competitions, and we have to suspect that the fire was started because it has been a summer with many burglaries in the building and people who have lived there from time to time.

They have entered through the sunroof and slept over, he says.

"People have spent the night"

The kayak club has made several police reports of intrusion into the target house and the latest was made only a few days ago.

- I would guess that people spend the night there sometimes and we have tried to stop that.

Today we also reported the fire to the police as well because we do not think it has started to burn by itself, says Viktor Ek.

The club will probably not rebuild the target house again - unless the insurance covers the cost.

- But the problem is also that we built the house in 1994 and now other building standards apply that make it more expensive. Maybe we can manage to arrange the Canoe Championships if we set up a number of containers, says Viktor Ek.